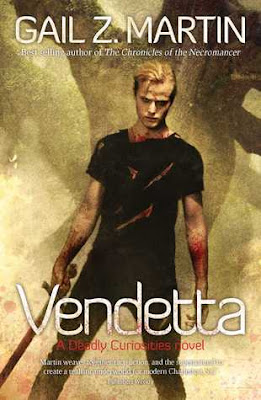 Cassidy runs Trifles and Folly, an antique shop, with Teag while secretly using her psychometric powers to ensure dangerous magical items are quietly squirrelled away where they can cause no trouble. It also means she’s in a good place to see when the ghosts of Charleston are getting riled up

And when it does it heralds a major new threat come to town – but this monsters and its terrifying, apocalyptic minions are not just a threat to the city, but a very personal threat to Sorren, her vampire protector and mentor as well

I find myself faced with the same issue I have with this author’s other books – because there’s a lot I like about this series. I really like the world setting. I love the whole concept of trying to control magical artefacts that may cause damage either inadvertently or purposefully by unscrupulous people.

I really like how ghosts are such a large part of the book as well – it’s rare to see ghosts to be such a major emphasis in an Urban Fantasy novel and I do like the novelty of it. I also like how the ghosts are worked into the setting – Charleston – and history. And here we have another unique element – it isn’t sanitised. For whatever reason, a not-insignificant amount of Urban Fantasy is set in the south of the US, with lots of immortal beings all straining real hard to pretend slavery wasn’t a thing. This book doesn’t do that – the haunted streets of Charleston is populated by many of the horrors and scars of the city’s history. I like that, I like that a lot.

I like the potential richness of this series with so many different magic systems, vampires, ghosts, demons and even hints of many more. I also really like how restrained the series is. Sometimes you have a book series that has taken the kitchen sink approach to the supernatural and they decide to include ALL THE THINGS. This book doesn’t – only what is relevant is present and most of that focuses on a few magic users, the ghosts that populate the city and the core characters. I appreciate the restraint.

And I like the characters. I like Cassidy who, as I said in the last book, is skilled and capable, powerful without being super powered, with good relationships and good friends. I like Teague – an openly gay characters who manages to dodge a lot of stereotypes and have a very original (albeit rather convoluted) magic. We do have a number of very powerful, respected and capable Black characters who make regular appearances – but they are called on for their woo-woo. Yes, everyone has woo-woo in this book, but there’s more to Teague and Cassidy and Sorren than their magical nature – while the Mambos and Root workers are, well, Mambos and Root Workers. I don’t know much more about Mrs. Tiller than the fact she’s a root worker. I don’t know much more about Lucinda than the fact she practices voodoo. Yes, she’s a professor – in voodoo. It kind of defines her character. I think in book three I really need to see more of Lucinda: her past, her history, her hobbies, her work, her relationships. I want to see her do something that doesn’t involve a Loa

Now the invocation of the Loa did seem to involve a decent amount of research. Perhaps not more than you can do on google, but more than just repeating the name “Baron Samedi” a few times and throwing rum and cigars about.

So what’s my main issue with this book? Same as the other two books I’ve read by this author – flabbiness!

This book is long and it feels long. There’s a whole middle of the book where the characters are… “investigating” for what seems like a painfully long time. And I’ve put investigating in quotation marks for a reason – because they just seem to repeat the same things, learn the same things and not really advance the story at all. There are points in the book where I feel like Cassidy is going for a midnight stroll just daring for the bad things to take a pop at her so we can have another fight scenes

And the fight scenes are well written, excellently paced and nicely show off all the characters’ capabilities – and the ending fight scene is epic. But there are so many of them and by about the 5th or 6th random encounter or midnight stroll or angry ghost or Nephilim attack I kind of wanted to reach for the fast forward button. I think we just had too many answers too early in the book… so why was everyone still asking questions when we already knew?

Despite this, the book did manage to create a good sense of suspense, of the characters facing a big bad ending that they had to hurry to stop or all hell would break out with lots of good emotion because of that and a nice, ominous, foreboding sensation: which is impressive given the flabbiness. But oh the pacing in the middle nearly lost me.