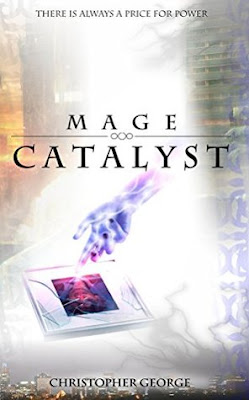 Devon is, in so many ways, a normal Australian teenager, like so many other teens

He is a mage: a being of incredible potential power. But there are few things more corrupting than power.

The core of this book is that Devon is, ultimately, an ordinary person. He’s an ordinary teenager who discovers something surprising has happened to him. That’s the defining feature of how this book is laid out, starting from its very ominous beginning where we clearly expect something very unordinary and pretty horrifying to happen. This book is the origin story. This is where the vaguely mentioned ominous things find their beginning

So the very ordinariness of the book is the point. Devon is a teenager, an 18 year old with very 18 year old problems.

He has friends who aren’t always good people but who he cares about. He has romantic issues with Tina and lots of fumbling awkwardness. He’s not academically gifted and school is both a struggle and a trial. He has clashes with teachers but, unlike so many other narratives, it’s quickly clear that his teachers do actually care and aren’t just terribad awful people he has to navigate around. He has some concerns about the future but is largely ignoring it even as other people try to get him to take it more seriously. It’s a very normal reaction – he’s a kid trying to avoid hard questions he has no answers to.

He has a lot of very real world problems and it is excellently portrayed.

The problem is… I don’t really care.

And I feel kind of bad for saying that because it’s really well written and it feels so excellently and realistically portrayed. I really get the strong feeling of Devon as a teenager, a very ordinary teenager as well. I’m just really not interested – and that’s entirely a personal taste thing. I don’t really care about Devon and Tina or Devon’s school work, or Devon getting through school or Devon’s plans for the future or Devon’s friends or Devon’s family or Devon’s normal life. Even his interactions with magic and his friends seemed really drawn out. There was a scene with him playing pool with Tony and being sharked which seemed to go on for endless pages

I really feel kind of shallow for saying it, but I really don’t.

I do really like his interactions with Renee. I love the world building that goes into learning about mana. I love the development of it. I love the interactions and fun between Devon and Renee. I love how learning about mana changes Devon, I like how he wonders and worries about what he is becoming and is able to do. I like how it changes how he views things, I like how previously threatening people become so mundane to him because he has so much power. I like how he loses the thrill of extreme sports because he’s so powerful now there’s no threat any more. I love how you can see the seeds of this changing him as a person. I love how magic is portrayed, how it both has a coherent system but also how it is very different from how I’ve seen it before. I like how, just seeing how magic works and affects people, we can clearly see how it can lead to a mage’s corruption and inhumanity. I like how we can see the trap clearly without it being spelled out too simplistically to hit us over the head with it. It’s a nifty system with a terrible snare built into it.

And it’s because this is the core of the book, the beginnings of seeing how Devon is changing as a person, becoming slightly inhuman in his thoughts – contrasted with Vin a late appearing antagonist who seems to continue these threads – that we really need to stress the normality of Devon’s life. Without the normality of Devon clearly spelled out, his slow shift into something truly not normal – and the menacing threat of what he could become has a real chance of being lost. All the action and fun and introspection needs that normal base

But it doesn’t change that I didn’t find the normal base particularly intriguing or compelling. Maybe it’s because the introduction was such an excellent, ominous lead in, but I just didn’t. Not for any fault of the writing or portrayal or anything similar – just, I think, from my own taste, my own preference for the mystical and magical and generally finding the mundane dull.

We do have some major female characters, particularly Renee who is an interesting mentor/ally/love interest/friend to Devon. There’s a long history in fiction of male protagonists getting a female mentor to teach them to be awesome protags – even though the woman could definitely be a better protagonist herself. I feared we’d see the same here – but despite his talent, Devon never surpasses Renee and she has her own storylines and involvement – perhaps even being more closely involved in the plot than him

There are virtually no racial minorities – I counted one tiny mention of an Asian teacher. There are no LGBTQ characters – but homophobia is used by some rather tiresome bullies: using homophobia as a plot point while not including any actual LGBTQ people is an annoying habit which really needs to end

I think I leave this book feeling it was decent as a stand alone novel – but has vast potential as an origin story for much much more. Looking at it from that angle, I am definitely eager for the second book and consider the normality that isn’t to my taste to be an essential part of that eagerness and foreshadowing