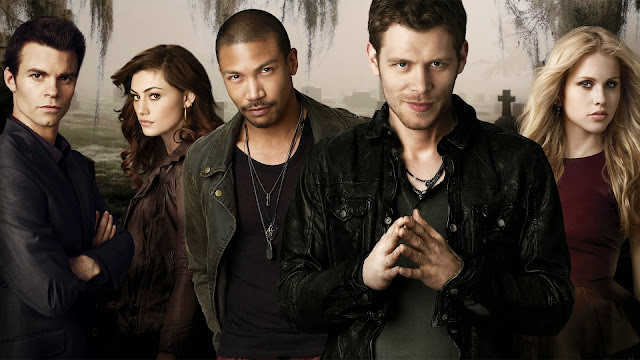 The center of this story is the Original family.  Though they have all had their many jealousies, betrayals and angst, the Mikaelsons put one thing above everything else and that is each other.  We have seen time and time again the collateral damage around them pile up but it's always in the name of the supposed greater good - keeping a member of the family safe. For someone like Marcel, who has almost always been on the periphery of the Mikaelson family, this poses a troubling question.  Has he been around long enough to truly be considered one them, or will he be disposed of at the slightest threat.

It has become far too common in this genre, to use the death of women to motivate men.  In this case, The Originals has chosen to use the death of Davina (who I'll never miss) and Cami.  Davina's sparsely attended funeral is held in the morning with Marcel, Kol, Vincent and Josh (remember him?) at the graveside.  Cami's much larger funeral, is in the afternoon and it is followed by a full on Irish wake. Marcel shows up long enough at Cami's wake to place a flower and for Klaus to see that things are not good between the Mikaelsons and Marcel.

The only person to attend neither funeral is Freya, who keeps busy trying to find out if they have at last put the prophesy to bed.  It's not long before Freya realises that the threat has moved onto Marcel and that he will bring blood and destruction in his wake.  When Freya realises that the potion which Vincent took from Aurora's heart is missing, what happened becomes all to clear.  Since they cannot get in touch with Klaus, Elijah goes in search of his younger brother.

Klaus is completely unaware of the threat that Marcel poses and actually seems to want to make things right between them.  Klaus takes Marcel to a bridge they visited hundreds of years ago to spread the ashes of Marcel's father.  Klaus repeatedly tells Marcel that he views him as a son but it all very much reads like a well intentioned White Man's Burden speech.  Rudyard Kipling would be so very proud. It's all about how Klaus saved Marcel from slavery and essentially gave him the life that he has today.

All of this is a problem because since season one, Marcel has been cast as the uppity negro who just doesn't know his place.  Klaus even goes so far as to admit that he started becoming abusive because of his fear that Marcel would surpass him.  I couldn't help but wonder at that point, if The Originals had even one writer in the room who was capable of seeing the horrible racial dynamic that they created in this scene? Sure, they kept framing it around whether or not Klaus and Marcel could consider each other family but what I saw is White supremacy's fear that POC would one day throw off our shackles and treat White people as we have been treated.  What I saw was fear of vengeance and our desire for justice.   Marcel goes as far as to say that he only ever wanted equality with Klaus.


The situation escalates when Elijah shows up, demanding that Marcel hand over the potion.  Marcel suggests that since they are all family, none of the Mikaelsons should feel threatened by the fact that he wants to take the potion.  This is the moment where Klaus moves from trying to appease someone he feels his family has wronged to viewing Marcel as a threat which must be dealt with.  Klaus in all of his arrogance promises Marcel to forgive him this betrayal if he hands over the potion right now. For Marcel, this moment simply clarifies what he has long believed about the Mikaelsons and his place with them. Marcel puts the potion bottle to his lips, only to have Elijah slip in behind him and rip out his heart.

It's all so sad, Marcel is dead.  Both Elijah and Klaus are full of angst and regret as Elijah asserts repeatedly that he had no choice and what Freya saw in the prophecy. The White man pain at killing a MOC who has faithfully served them for hundreds of years turned my stomach to watch.  The way in which they assured themselves that there was nothing else they could do because Marcel represented a threat brought home to me the countless times Black men have been killed by White men because they have been deemed a threat, because they dared not to be subservient, because they dared to be men. Neither The Originals or The Vampire Diaries has ever been particularly racially aware but this episode absolutely takes the freaking cake.

To turn Marcel's supposed death into a moment for White man's pain is epitome or racial cluelessness for the purpose of entertainment.

At the end of the episode, it's revealed that Marcel is not in fact dead because he took the potion the moment Vincent offered it to him so that he could get vengeance for Davina. Yeah, I know that Marcel was supposedly a father figure to Davina but given all that the Mikaelsons have done to him the very idea that the cause that sends him looking for justice is the death of a ridiculous white female teenager just burns in my gut. This show just keeps doubling down and its problematic elements.

Speaking of Davina, we get to see her for hopefully the last time when Vincent and Kol with the help of the ever faithful GBFF Josh, cross over to the other side. Vincent's big plan is to sever the ancestors link with the living. Davina takes over the job and quickly sends Vincent back to his body. Davina is adamant that the witches will be lost without the ancestors and will need someone to lead them. Kol is allowed to stay behind briefly so that he can have a teary goodbye.  For Kol, it's all about how Davina saved him and brought him back to life.  Yes, well, what's an episode of The Originals, without a reason to engage in some epic eye rolling.  Davina sends Kol back and then has her moment of triumph destroying the link herself.  May this officially be the last we see of Davina Claire.

Give 'Em Hell Kid is the penultimate episode of season three.  Thus far we have lost two female characters (one of whom I really disliked) and Marcel is really starting to look like dead man walking.  The Mikaelsons don't deal well with anyone who they perceive as a threat and as Marcel pointed out, always like to see themselves as the heroes of every tale though they are more often the villains. We know that Marcel cannot possibly win this fight and it's disturbing that once again, he will forcefully be reminded of his place, if he survives.

At any rate, The Bloody Crown is shaping up to be an epic angst fest with justice finally being attainable for all those the Original family has wronged over the years. It's hard to get to excited at this point because we all know that no matter the consequences, Klaus will end up ahead because he is essentially the protagonist. Maybe the writers will for a little while at least grant us some time to see Klaus get what's coming to him because that's about the best that we can hope for.