Review: Flip This Zombie, by Jesse Petersen, Book 2 of the Living with the Dead Series 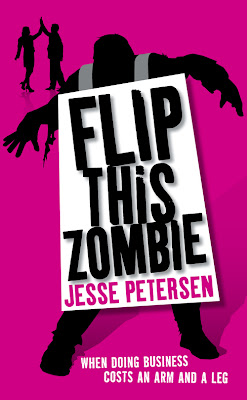 Sarah and Dave are zombiebusters – trading with their fellow survivors in the badlands to clear out pods of zombies that are in inconvenient places. It’s a lucrative job (in so far as anything is lucrative after the zombie apocalypse) and they’re beginning to gain some minor celebrity status.

So much so that they have been noticed by Dr. Barnes. A government scientist holed up in a working facility who thinks he has that most precious of holy grails – a cure for zombies.

Sarah and Dave (and their new companion, Robbie, a kid they saved who brings his own drama) are now tasked with finding and capturing living zombies – far easier said than done. Especially since there is a new kind of zombies out there- bionic zombies who don’t seem nearly as mindless as the ones they’re used to killing

It’s more complicated in that Dave does not trust Dr. Barnes and a rift develops between he and Sarah as her hope clashes with his cynicism.

This book had an interesting story that added some more twists to the zombie tales. I’m not entirely sure if they have been done before (they feel like stories that should have been done before) but I haven’t read them. It was an interesting concept and (largely) held together (I think David’s seeing of the brand on the neck was too early to maintain any kind of mystery and it just served to undermine Sarah). I won’t say the ending was predictable – it had interesting twists that were unexpected for one – but nor was it a complete surprise either. Still, the journey was fun and interesting even if the destination wasn’t unexpected.

The very concept of zombie hunters in the badlands is such a fun one. And it nicely adds a new element to the whole post-zombie-apocalypse survivor meme. Usually we see  survivors hunkering down, hiding, trying to find a safe place and scratch a living in the new, harsh world. There's lots of running, lots of hiding, lots of fear and lots of despair. People fight when they have to but run when they can - ultimately, safety is the goal. Having Dave and Sarah hunting down the zombies, exterminating them is a wonderful twist to the idea. They're not running in fear, this is their day jobs and while things are bad and scary they've taken it in stride and are now dealing with it. They're professional, capable and fit well into the world they've found themselves in. It makes both of them great characters and adds more depth to a setting you can examine as an actual setting rather than a horrific background of fear that the characters have to navigate

There are also elements and scenes that I just love – Sarah’s love of weaponry, the horde of zombie guinea pigs the idea of libraries being some kind of shrine – these are nice elements that added fun and depth to the book

I’m saddened that the interactions between Sarah and Dave are much worse in this book than in the first book. The excellent bickering that we got between them now felt more like Sarah fighting to be reasonable and calm while Dave sniped and sulked. It felt like Sarah was tip-toeing around his ego, his temper and his general flounciness. Dave in general seems to have developed several traits that, while I can understand them, are making him much less likeable. His “giving up on hope” has made him surly to the point that no-one can have any real conversation with him without him attacking them. He has become even more over-protective of Sarah and keeps questioning her actions for her safety and trying to restrict her. She repeatedly refers to his Neanderthal-like behaviour but it’s played more as cute and loving than irritating. And his jealousy got on my very last nerve – it was unnecessary and it was overdone and made his realistic objections just look discountable because of his pouting.

It reached a point where, even though I disliked the kid and Dr. Barnes I was almost sorry about the ending because it validated Dave and all of his pouting temper tantrums.

To me this caused this book to have a big dip from the last one – especially in the middle. Not just David’s attitude but the introduction of the kid – and the Kid and Sarah adopting the bickering interaction while David played parent – was also not fun to read. the kid could have been developed into a better character, I think, if we'd had more time but I don't think we had the chance. As it was, the actual moments where the Kid was a decent human being I didn't want to strangle didn't nearly counter the times I wanted to see him eaten by zombies. there was also a lot in the aftermath of Dr. Barnes that really wasn't addressed.

Inclusion-wise we had pretty much nothing. Sarah is still a great character though, strong, capable, making reasonable decisions even when she is wrong – but between her interactions with the kid and interactions with David, she missed the awesomeness she had before.

I still enjoyed this book and much of my negativity about it comes less form the book being poor and far more about Married with zombies being such an awesome book I had high expectations. I think a lot of what we saw there – the fun interactions, the growth as characters, the poignant, painful moments, the humour, the horror, the impact – it just wasn't there to anything like the same extent

It still made me laugh and within 5 minutes of me picking the book up I was smiling. It still had hilarious moments and still had times where the interaction was a perfect follow on of the hilarious, fun interaction of the first book. But it didn’t really deliver the awesome that the first book promised.

I enjoyed it, but I’m disappointed – I wanted and expected more.