Review: Thread of Death by Jennifer Estep. Book 5.5 in the Elemental Assassins Series 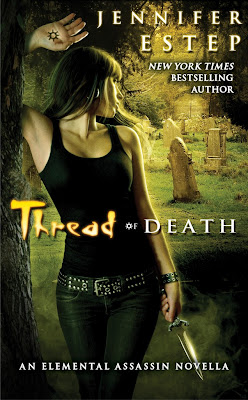 Normally I don’t like short stories or novellas, so I was in two minds about reading this book or, maybe, just maybe, moving on the next one. Or maybe reading it without reviewing it because I know my own personal dislike for the style would skew my opinion.

But I was really pleasantly surprised. This book worked – not only did it work but I’ll go so far as to say the series needed a short story at this point. After the last book, Gin had just defeated her arch-nemesis. This had been books and books in the making. The build up and the execution was also pretty involved and pretty epic.

Which leaves a problem of where to go from there. What do you do, introduce a new Arch-Nemisis? What, so soon? It looks contrived shouldn’t she have some time to live first. But then – can you write a full book about a “day in the life of Gin Blanco”? Maybe, but following up with that after the epic plot of Spider’s Revenge would be a bit of a climb down to say the least.

So we have the novella. And it’s just perfect for what the plot needs. We see Gin recovering, hints of some of the aftermath of what happened (including the fact that she isn’t physically healed and that the victims aren’t all mentally healed either – which is an important point that is often overlooked).

And of course, there are consequences to destabilising the corrupt city of Ashland’s criminal power structure. People are manoeuvring to get into the top spot that has now being vacated which will, no doubt, include much plotting and many deaths,.

And, of course, we see the foreshadow of a different world for Gin Blanco – one in which it is commonly known she is the Spider – and the assassin who took out the most powerful elemental in the city. Aside from the fact that anyone who takes out a crime boss is usually expected to step into their shoes and Gin has no intention of leaving her BBQ restaurant.

All in all, this book is just perfect for the series. We’re getting the new themes set in place, we’re establishing exactly where the city stands now. We have a reminder of what enemies she had who are still alive and an introduction to the new antagonists that are encroaching on the scene.

And we have some nicely written action to remind us just how much Gin kicks arse. We also see her using her magic more casually which I really hope is a sign of things to come – as it was definitely something that frustrated me inearlier books.

All in all, it’s a short story, but it’s what the series needed and essential to maintain the pacing of the series, I think. It's also well paced and developed - too many short stories I've read are either hurried or just don't have enough concrete plot for their existence - they have an idea and they try and stretch it out into an actual book. This got the balance perfectly.

I didn’t expect to like it, I read on the assumption that I wouldn’t enjoy it but needed to get through it in case any new information was revealed – it was a great surprise.