Review: A Kiss before the Apocalypse by Thomas E Sniegoski, Book 1 of the Remy Chandler Series 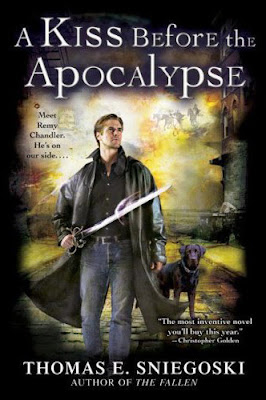 Remy is a private detective, making his bread and butter following cheating spouses and similar petty investigations. One such investigation leads him to a pair who commit suicide, driven to the edge by the apocalyptic dreams the man is plagued by. They commit suicide but, miraculously, they don’t die.
Except it’s not miracle – and Remy should know, because he is an Archangel. Disillusioned with heaven, he hasn’t so much Fallen as withdrawn from Heaven, turning his back on a paradise he no longer wishes anything to do with.
He has little choice when the pattern continues and people stop dying. Their souls screaming for release, they’re trapped in their bodies. Israfil, the Angel of Death, has gone missing and his job is undone. And if that weren’t bad enough, Israfil is the guardian of 5 scrolls that begin the apocalypse – should their seals be broken.
Remy has to find Israfil and his scrolls in an investigation that takes him through the dregs that
Heaven and Hell both don’t touch; Fallen Angels, Shunned Angels, Banished Angels and disgruntled immortals.
On a personal note, Remy’s own family is falling apart. His wife of several decades is old and dying slowly from cancer. Of course, she can’t die until Israfil is found – but is Remy really ready to let her go?
The author has clearly done a lot of research. There is an enormous amount of angelic lore here, from angel names to the different choirs – there’s a vast amount of work gone into this and it’s really wonderful to see. It shows in the story – the world building is truly excellent and you can feel the mythology behind it. I really can’t stress enough how well done this world is and how real it feels.
Similarly, Remy is a very good character. He has strong connections to his family with really well represented emotional bonds – even with Marlowe (a talking dog that is really well done as well – you can believe this is a dog. It’s not funny or witty but exactly how you’d expect a dog to think and talk). His reasons for Falling are reasonable, his friendships true and his actions make sense and really fit with who and what he is. Like the world, he feels very real and very well put together.
The story itself is an interesting ione – I’ve read other stories with the disappearance of the Angel of Death before and they tend to follow the same pattern, but the amount of lore that’s included, the enemies that are behind it (which I was completely surprised by and didn’t expect even slightly) and the bringing in of several other elements from the deeply research world – the Grigori, the Black Choir, Lazarus, Francis mean it’s anything but clichéd. I love when someone takes a story and adds so many twists and different aspects to it making it a completely original story even if the basic concepts are ones you’ve read before.
My main criticism of the story is one of pacing. I think there is a lot of work to try and get the full emotional impact and to truly emphasise Remy’s emotional bonds, especially with his wife and, to a lesser extent, Marlowe.  The problem is that the world is ending – literally ending. We have the horsemen of the apocalypse lurking over the planet, seas are receding, people are dying but being trapped in their bodies – everything is ending. And Remy is walking the dog and visiting his very ill, elderly wife. Yes, it’s understandable that he loves them and we do need to see the full impact and power of that love. The problem is that the world is ending – and this is utterly destroying the sense of urgency that you’d expect from a stopping-the-apocalypse story.
Despite this complaint, these powerful scenes do carry a lot of impact. They’re really well written and extremely touching – the bond he shares with his wife is poignant and painful and is a nice take on the idea of an immortal and mortal relationship. In most books we see when they’re both very young or some supernatural means makes the mortal partner immortal – but here we have the end of the relationship. His love continues right until the end of her life, but there are clear and painful consequences of an unaging angel falling in love with an aging human – it’s really well done.
Inclusion-wise the story falls very flat, this Boston is entirely straight and the only POC we see are bit characters. There’s also a huge white default issue with descriptions – when Remy sees 2 children playing, for example, he’ll say there was one girl and one Asian boy. The only women we see are, again bit characters who have few lines and his wife who is extremely ill with cancer in a care home. Now this isn’t a story that focuses on other people than Remy, it’s very much a one character book – but I think even his dog gets more attention than any minorities.
All in all I liked the story and absolutely loved the world. Now we have this vast world building and huge amount of research revealed I really want to see what more is coming, what more we can expect. It’s a great stand alone book, but as the first book in a series it’s truly excellent – laying down a good character, an amazing world and some really good plot hooks. All in all, it’s one of the best Angel urban Fantasies I’ve read.