Review: The Burning Bush by Kenya Wright, Book 2 of the Habitat Series 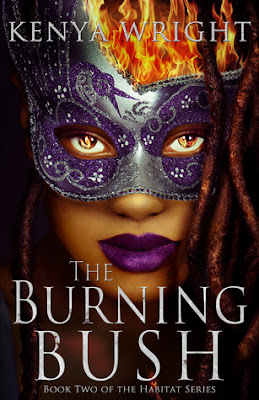 Lanore and Zulu are pushed into retaliating against the Vampire Dante’s brutal slaughtering of Mixies – either they retaliate or their allies, the Rebels, will and they’re much less concerned by the casualties they may cause

And to make things more complicated, the Habitat police have evidence of her inside one of the bombed buildings – more than enough proof to have a Mixie arrested or just killed. Their price for her silence? Her acting as detective again, her untrained skills being vastly superior to that of the inept Habbies. She needs to track down a strange arcane murderer who has killed a Mixie – not that the police care about the Mixie, but by finding her murderer they may find the murderer of a rich, influential Pureblood’s daughter.

But tensions between them and the Rebels flare along with the war against Dante fluctuating – and just when Lanore needs more careful thinking to work her way to who is truly behind the conflicts she has to deal with Zulu’s raging emotions.

I was extremely happy when I saw this book was coming out and when Kenya Wright sent us a copy, I’d been waiting eagerly for this one for some time.

This book is one of the few truly original urban fantasy stories I’ve come across. Its world setting is completely and utterly different from any I have seen before. The supernatural races and humanity fought a war for control soon after the supernatural was discovered and, after initial successes, humanity won. The surviving supernaturals were fenced into massive, enclosed cities, unable to leave and the only humans they interact with are the Habbies, the Habitat Police, who are actually human criminals given the chance to lower their sentences by working in the Habitat. Needless to say, it doesn’t create the most driven, skilled or uncorrupted police force imaginable.

Within the Habitat are all kinds of supernaturals – vampires, fae, elves, shapeshifters, demons, witches and no doubt many more. All of them living under the oppressive control of then humans, with invasive tracking devices and monitoring. There are also the Mixed blood, supernaturals with different supernaturals as parents who are reduced to a heavily oppressed, second class citizen status.

It’s a massive and rich world – and a very detailed one that is elegantly presented. Despite there being no lectures or massive info-dumps or clumsy “as you know” conversations, a lot of information is still passed on as it is relevant, as well as small details that add greater depth and realness to the world. For example, the Witches hate the vampires because they fled during the war rather than standing alongside the other supernaturals. Or the different methods the humans used to suppress each supernatural. The world is so fleshed out that it feels like a real history with all the minutiae and nuance and details available but none of them overwhelming the story.

And the story itself is a fascinating one. Lanore is pulled in many directions  - with the murder she is blackmailed into pursuing as well as trying to manage their alliance with the Rebels and their own plotting. Despite multiple story threads, none of them are lost and the pacing is excellent. It can be hard to keep everything in order in a way that doesn’t derail or confuse any element of the plot, but this hits the sweet spot. Even when things get complicated and we have betrayal within betrayal and a plot far beyond fighting against the vampires – it evolves into something highly complex with multiple players. The vampires, the rebels and their agenda and, ultimately, the humans all come together for a collection of conspiracies.

And it doesn’t all end happily ever after or cleanly or even neatly – even aside from the cliffhanger. It’s a grim, difficult world and everything doesn’t neatly slip into place. The crime isn’t given true justice, though all of the guilty suffer and there’s no mistaking that justice and true fairness is a luxury they just can’t get in the Habitat.


This book – this series in general – does an excellent job of portraying class and expendable population and just how little marginalised people can matter in society. The Mixed supernaturals are utterly overlooked and regarded with contempt. They’re not allowed in some bars or shops without a Pureblood to take responsibility for them, they are constantly separated at every turn from their “betters”. The murder of a wealthy Pureblood is quickly looked into and examined, while the murder of a Mixie is completely ignored and the body casually disposed of without even the most casual collection of evidence. Even where they live – in the poor district of Shango, when a bomb goes off the schools are closed and the wreckage isn’t cleared up for weeks, completely disrupting everyone’s life. When a similar bomb goes off in a rich neighbourhood, the schools stay open and the wreckage is quickly cleared, the disruption kept to a minimum.

We do have some minor GBLT inclusion in this book – with a brief scene with 2 women making out. Unfortunately neither character is ideal, one is childlike and foolish and ends up on the path to becoming a sexless, genderless amoral creature and the other betrays the protagonist.

This book has some truly excellent female characters – including the awesome Lanore who I love and is strong in all the best ways, from power to agency, to decision making as well as being a woman strong enough to overcome the crap that is throw at her and rise above it. She navigates her difficult life with multiple pulls on her as well as considerable exploitation because she is a Mixie and still manages to hold the reigns and stare down people who challenge her whenever she can. But, for all the great female characters in the book, the male characters still engage in some unchallenged sexism. Lanore does express her contempt over the frat houses scoreboard of women they slept with and similar objectifying practices, but the world building itself has an unpleasant inclusion – the Season. Wereanimals enter a secondary puberty, called the Season, in which they become highly sexually active and that sexual drive is used to justify everything from cheating and womanising through to sexual abuse and even rape. It’s a classic Explained by the Woo-woo moment. I’m also really tired of not only Zulu and Meshak fighting over Lanore – but them literally coming to blows over her to a degree that they can hardly spend 5 minutes together without them risking violence.

As in the last book in the series, this book as a lot of racial inclusion – a huge number of the characters are POC, probably making them a majority over the white people which is such a refreshing change from most Urban Fantasy. The Habitat, as well, is structured on the Santeria religion. Every Habitat around the world is named after and based around a world religion – so there’s Shinto Habitat in Japan, for example. While there isn’t a huge analysis of Santeria religion (which would probably be awkward anyway and go against this book’s habit of avoiding info dumps) there was a lot in the last book and there are a lot of references in this one. The districts are named after Santeria deities, people dress up as them for holidays, there are festivals in their honour, people wear the colours of the gods and most people are devotees of the faith. It’s great to see Santeria not just presented (and presented as something more than scary dark magic) but also presented as the normative religion of a region.

A copy of this book was provided for review by the author.
Posted by Sparky at 12:00 PM