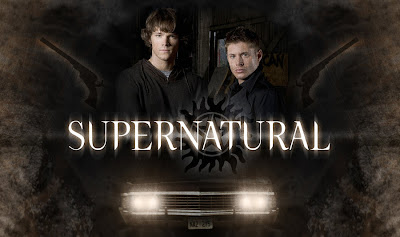 The emotional content of this season is extremely well acted and powerful as well as being a higher scale than last season, It’s interesting to see all of these emotional dramas managed as the Winchesters suffer more and more losses and shocks to their confidence and sense of self – they do build up as you’d expect and is reasonable. And they’re treated respectfully, the brothers never start wailing, but there are plenty of strong scenes that really carry the weight of the pressure and pain they’re having to endure. In this season we not only have the fallout of their father’s death, but the pressure of Dean’s deal with the demon to bring Sam back to life. The nuances in this are really well done – from Dean embracing hedonism (well, more than usual) as a denial, to his poorly hidden and suppressed fear. We also have Dean’s fear that if they try to break the deal it will end up reversed and Sam will die again which causes him to battle against Sam. We have some excellent portrayal of Dean’s extremely low self-worth, how he has been moulded always to follow his dad’s orders or to protect his brother – they were the valuable ones and, from his low self-esteem, he exists only to serve and protect (and sacrifice for) the others.

Then there’s Sam’s guilt, his need to indulge Dean in his hedonism and then his anger that Dean made the deal and saddled him with that guilt as well as his frustration at Dean’s unwillingness to stop the deal. There’s his fear of having to stand alone when Dean is gone and whether he is as hard and ruthless as Dean is. And, of course, there’s his ongoing fear of what being one of Azazel’s Special Children means, especially with Ruby pushing him to explore his power’s more.

That’s a lot of emotional content. Most programmes covering this much heavy grief and worry would have episode after episode of angst and moping – lots of moping. Again, Supernatural resists the urge to give us scene after scene of woe is me while, at the same time, giving us the full emotional impact of what the Winchesters are enduring. And these scenes are important, considering the pressures on them there should be an emotional cost, they shouldn’t be the big bad heroes who don’t worry or get scared or grieve and they should have strain on their relationship. In fact, the strains on their relationship are then used perfectly to show just how strong that is

Most of the episodes worked really well for me in terms of enjoyment, even that dire Christmas episode with the Pagan gods. I think the groundhog day episode managed to redeem itself – and I am so very tired of this gimmick – by having the Trickster teach Sam a lesson – what he will become without Dean, what he is trying to become and what that will cost. The Ghostfacers, silly amateur hunters, just get on my nerves though.

The ongoing meta plot is epic and engaging – with the dual threads of trying to save Dean from Hell at the end of the year after he made a deal with a demon to bring Sam back from the dead and the plot of the threat of Lillith, the new big bad demon who has stepped into Azazel’s shoes as the demonic leader. Sam is also a leading contender for that title – which puts him on Lillith’s hit list.

Lillith is built up as a terrifying enemy. And yes, the whole spooky child thing has been done – it doesn’t change the fact that the spooky child is still so extremely terrifying at times. She is a threat whose menace is both maintained and slowly built throughout the series – even without the Winchesters focused on her, she’s always there in the background and with Ruby constantly rising up to push them towards the goal.

I also quite like how they handled Bela, after all, if you have all these supernatural stuff going on there has to be some people taking advantage. She provided a distraction, a reminder that the whole world doesn’t revolve around the cause of the day as well as a reality check on their own motivations at times. And, in the end she also elegantly turns round and fits into the Lillith plot, just another thread in a multi-sided story. I was also both surprised and partially pleased by her lack of redemption – because that is clichéd and by not redeeming her it fits into the series ongoing feel of grittiness and darkness – some things are just evil. Her, along with Ruby, added to the greyscale of the series, the having to hold your nose and deal with people you find reprehensible for the sake of the greater good. How there just aren’t enough resources for them to be that picky about who they get into bed with, especially when they consider what is at stake.

The second big shock of the season was the finale  - they did not save Dean from Hell and it ends with him being taken down to the pit by the Hellhounds, all their planning had failed.

Inclusionwise we still have problems. Almost straight out of the gate, season 3 makes the same mistakes when it comes to inclusion. On the very first episode we’re introduced to a Black couple who are hunters. Like so many Black people in this series, they take an instant dislike to Dean and Sam, blaming them for opening the hell gate. There follows them going off half cocked on a plan with him dying and her needing rescuing – and her, again, nearly ruining their stand against the 7 deadly sins. Among other notable POC (the ones who show up for more than 2 seconds to be eaten by the monsters – and there’s not even that many of them) is a reappearance of Gordon. Yes, the fanatical hunter who wants to kill Sam. He makes repeat appearances either working through proxies in prison, or acting himself, focused on slicing and dicing Sam. In the end he’s turned into a vampire and sliced and diced himself. We also have Henrickson, the FBI agent who is obsessed with bringing Sam, and Dean to justice. After being yet another antagonistic Black man determined to bring difficulty to the lives of the Winchesters (and, seriously, that’s 3. In a show with this few POC, that’s a lot) he finally sees the light. I had a brief hope – would they develop a police contact? Would he be a regular supporting character giving them insight from the right side of the law? Nope, Lillith eats him. The one counter to this string of antagonistic Black folks who then die is Rufus. Rufus, the old hunter, could have been a source of information and support similar to Bobby or Ellen – instead he makes only a cameo appearance and tries to act as an example of how bad it is to be an older hunter (glaringly challenged by Bobby).

We do have an introduction of 2 regular female characters. They’re not in every episode but they appear periodically. The problem is they’re both devious, not very trustworthy and bring considerable risk and danger into the brothers’ lives – and there’s an element of sexual attraction in both cases. Ruby is a demon – now she does redeem herself and prove herself by the end of the season, but her whole role in the season is to be doubtful and suspicious, a source of distrust. There is a constant theme of whether Ruby is leading Sam astray or down a dark path. The second is Bela, amoral thief, manipulator and, of course, source of suspicion and distrust who is not only risking everyone’s life with her own selfish goals but is actively working with demons – and for much less noble purpose than the Winchesters. And she gets eaten by Hellhounds and sent to Hell. What compounds the irritation with these 2 characters is we had 2 strong female characters in the last season, albeit with their own flaws, that have completely dropped off the map – where is Jo and Ellen?

You contrast these recurring characters with the other big recurring character this season – Bobby – and you see a big difference. Now, don’t get me wrong, I love Bobby. He’s actually one of my favourite characters throughout the show in all seasons. But with the huge amounts of erasure, tokenism and tropes that Supernatural brings to minorities, it’s glaring that the extra regular character who is true and noble, who is loving and caring, who is a mentor and father figure and source of good sense, gruff humour and regular doses of “idjits!” is yet another straight, white man. I wish the same amount of care and characterisation that had gone into making Bobby such an endearing, fun (and alive) character had gone into the minorities as well.

Which leaves me in the same place I was after season 2. Loving the story, really loving it, enjoying the characters, loving the plot but still cringing at the complete fail when it comes to any kind of inclusion.