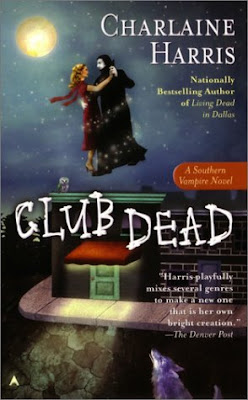 Bill is working on a secret project for the Queen of Louisiana – that would be the vampire Queen. Something that bypasses Eric and consumes so much of his time that Sookie feels neglected – it’s also something that takes him out of Louisiana.

And when out of Louisiana, he goes missing. Which has the Queen agitating at Eric and Eric bringing the problem to Sookie – they need to find Bill, in Jackson, Mississippi, rescue him and find his work. And to make things worse, Bill has taken up with an old flame.

Sookie is heading out with her telepathy to do some investigating with Aclide, a werewolf, for company. But while he knows Jackson, he also bring his own issues and problems into the situation.

In terms of plot I liked this book. Bill has been kidnapped and it’s necessary to travel to hostile territory to track him down and save him, with a side dose of personal drama I don’t care for but isn’t too awful. It was well paced – the story moved along without any lags or breaks with discovery following discovery all pushed with a decent amount of investigation. We have appropriate red herrings that remain mysteries until much later in the book. Even the disposing of bodies is well presented with what you’d think are normal emotions – the panic and the fear and the worry – rather than in a coolly detached manner that wouldn’t work with them

Negotiating in the different territory allowed for some interesting world building, some greater expansion and exploration of the setting that I enjoyed. But I felt it could have used more – I can understand not questioning Erica about Vampire monarchy – but just seeing Hobb the goblin and thinking “oh a goblin” and moving on?

If I had any complaints it’s that the investigation, as it goes ahead, ultimately relies on the extreme luck of Sookie being brought into the mansion. I’m also more than a little tired of the gratuitous violence Sookie faces – I expect a level of violence and injury in Urban Fantasy novels, it’s reasonable that a human playing with vampires is going to be hurt. But she’s attacked in the bar (unnecessary), staked (unnecessary but conveniently advances the plot), raped (REALLY unnecessary), then beaten up when she returns home (also, unnecessary). It feels like, the last scene in particular, is just added in for extra injuries.

Alcide is also a decent character if we learned more about him for him. Despite being there a lot, I’m left feeling like all I know about him is that he’s a werewolf, that he likes Sookie and that he used to date Debbie. For a character to be around so much he could have used more depth to him.


I like Bubba, I don’t know why but I do. He’s kitsch, he’s silly and he’s not the most respectful portrayal of the developmentally disabled (though he is capable, loyal, kind, strong and very talented and his limits are fiercely respected by those around him). Normally I don’t approve of recent celebrities being used like this either – but he works, he just works.

The main reason for not being fond of this book is Sookie! And not just for the woefully unaware line “It never occurred to her that the vampires would use torture, since she’s an American” yeah, I’m not even touching that one. Sookie is never one of my favourite characters in the genre and this book doesn’t show her in a good light. She starts with seething jealousy about the Bellefleurs getting money from Bill (their ancestor, their family) when she got nothing. For those having trouble remembering, this is a book after she dragged Bill out on the carpet for making her feel like a kept woman. And there’s her casual sex shaming “true adults don’t have sex just because the other person is skilled and pretty” uh-huh, not judgemental at all there Sookie.  Amusingly,  Alcide’s brother-in-law refuses to bring his kid round to Alcide’s because he has a woman in the flat and that’s just “not right” (seriously?) and this is presented as ridiculous – which it is. But how is his sexs shaming unacceptable but Sookie’s perfectly fine? And there’s a lovely line about the “real man” Alcide and Sookie there making breakfast for him like a real woman that was more than a little cringeworthy.

Sookie and other women don’t get on well. She managed to play nice with Janet (who continually gave her freebies) but otherwise those women better watch out, Sookie is watching them. This is especially true for any woman who dares to lay hands on Sookie’s man – and that’s difficult since every man who meets the Sookeh is instantly attracted to her. Debbie Pelt, who has the audacity to be Alcide’s ex, is considered a “phony” bitch on first sight (she is referred to as bitch 5 times in the book, dog once and implied to be a cow once – but Debbie implying Sookie is a prostitute is out of line and backs down) and she flirts with Alcide and acts couply to provoke Debbie. In comparison Lorena – evil woman #2 (any woman who touches one of Sookie’s men is evil. It is known. Actually it sort of makes sense – all these men are attracted to Sookie so their taste is questionable) is only called a bitch twice – but she does get murdered, which Sookie is deeply satisfied about.

She even blames Debbie for Bill raping her (again! This is now twice, please stop presenting Bill as a legitimate love interest, do collect a restraining order, do stake him). Yes it was Debbie who shut her in the boot of a car (though all Sookie gets is “shapeshifter” and it’s not like she doesn’t have plenty of enemies) but again Bill gets a pass – she’s angrier at Bill for cheating on her with Lorena. It’s barely even acknowledged as rape and certainly not treated

It’s also interesting the dichotomies Sookie can hold in her head. Like “fangbangers” are regarded her with derision and she’s quite happy for Alcide to refer to the “sick bitches that go with vampires”. It has to be pointed out that this doesn’t apply to her – oh not her – even though she does go with vampires. It’s different for her.

We do have some gay characters – a big gay mansion of euphemisms (“special friend?” Really?) and vinyl. They’re not exactly characters but they’re there to be condescended over, oh and gay kisses upset her. Not because they’re gay! It’s just the public display of affection (in a mansion, where they live – so “public?”) and the fact she’s never ever mentioned this when straight people kiss is, I’m sure, just an oversight. Right?

We have a few POC in the books, but they’re in minor roles. This includes “Chow” (if that’s a name of any Asian culture, which I doubt, it’s certainly not Japanese) with his exotic Asian tattoos and his slight exotic accent. This is a pattern with Fangtasia bar tenders.

All in all while the story is decent, the characters - and Sookie especially - annoy me a lot. And it's hrd to enjoy a book while reading through the eyes of someone you don't like