The Neighbors, Season One, Episode One 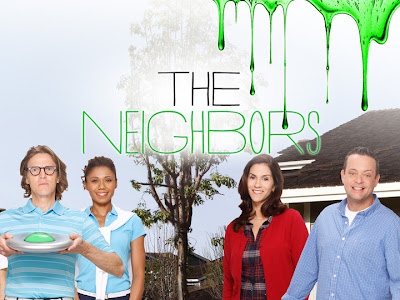 The Neighbours (yes, I am spelling it with a u because that is the proper spelling) skirts the line between sci-fi and comedic sitcom.  At this point, we haven't quite determined if this really and truly fits our genre but since it will provide so much to snark about, we have decided to follow it, though we believe it will be cancelled after the first six episodes.

In the year 2002 aliens travel to earth to discover whether or not the earth would make a suitable place to live, should their home planet become uninhabitable. They buy an enter subdivision in New Jersey with cash and settle in. Strife begins when Larry Bird forgets to bring the charger for the poopah (the device which allows them to contact home) and ten years later, it is beginning to run out of power, and so two of the aliens sell their homes and return home.  This means that for the first time in ten years, they will have humans living amongst them.

Unfortunately, it seems that Marty has decided to move his entire family after his wife Debbie, told him to surprise her and show some initiative.  She is clearly not impressed and meant something smaller. The Weavers first notice that something is wrong, when they meet Larry Bird, Jackie Joyner Kirsy, Dick Butkus and Reggie Jackson.  All of the neighbours have the names of famous celebrities. They leave about a dozen pies on the ground for them and walk away, after Larry and Jackie invite them for dinner.

The next night only the humans are eating and the aliens are reading because they receive nourishment through their eyes. When they head into the kitchen to clean up, Jackie is surprised to learn that Debbie has a job.  Debbie tries to get to the bottom of thing and she tells her that if Marty talked to her the way that Larry talked to her things would not be pretty.  Jackie admits that she wishes Marty would treat her with more respect and adds, "it's a though he thinks he can make every decision for this family, simply because he ruined his body carrying our two children."  In the meantime, Larry and Marty are talking about what they do and Larry admits they spend all their time and are independently wealthy.  Larry says, "there is no greater tribute to this planet than to name ourselves after its finest specimens," to explain the weird assortment of names.  Marty makes a quip of not being able to get Debbie to go for that and Marty answers, "my wife does what I tell her." 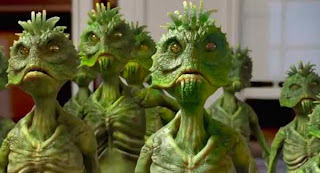 Upstairs the kids are playing when Butkus decides to reveal his true self, causing the kids to run out screaming. Larry says, "oh dear, I fear our little Dick may have exposed himself again."  Back at the Weavers, Debbie and Marty try to convince their kids that the neighbours are not aliens but quickly find themselves shaking when the Zabrvonians arrive and reveal their true nature. The Zabrvonians ask them to stay because they believe that there is so much they can learn from each other.

The next morning, things get even weirder when Marty looks out his window to find the Zabrvonians doing calisthenics in the middle of the street, one of them walking a lama and another using a buzz saw to cut down flowers. Debbie is rightfully freaking out and wonders about calling the police, but Marty tries to assure her that they are peace loving aliens, which means the  Zabrvonians are stable. Marty says, "the alien next door knows how to run his house so here goes. I am the man of this house and you are the woman, so what I say goes. Today we stay, unless you don't want to stay." Debbie quickly gets up and leaves the room."

Jackie Joyner approaches approaches Larry Bird to suggest that they recharge the poopah because if it dies they will not be able to contact their people.   Larry says that the cost to great and dismisses her.  Jackie says that she demands to be heard and Larry replies, "you have been heard wife, and now you have been dismissed."

Larry shows up at the Weavers to report that Jackie kicked him out of the house, but Marty tells him that this is not a good time. Debbie interrupts to say, "you two deserve each other. I live within ten yard of the two biggest schmucks on two different planets," before walking out.  Larry begins to leak green goo from ears which apparently is their version of crying.

Debbie heads over to Larry and Jackie's where the two bond over what an ass their husbands are. Marty and Larry bond over their marital problems. Debbie advises Jackie to recharge the poopah and Jackie agrees that this something she should have done a long time ago. Butkus is quick to agree and this impresses Debbie.  At the weavers, Larry reveals that only the youngest person can recharge the poopah and this means that Dick will be sent far into the future, where he will be raised by his own grandchildren, and they will never get to see him again.  Marty cannot help but giggle every time that Larry says Dick Butkus, which cause Larry to tell him to grow up.

Debbie is shocked when she learns what will happen to Butkus and Jackie says that she must be strong because this is for the good of their people.  KKKK tells Larry and Marty that Butkus is in the backyard because Jackie told him to recharge the poopah and so Larry and Marty go running. Jackie looks at pictures of her and Dick and she goes running into the garage, but Debbie gets there first. Jackie asks Debbie to hand over the poopah and Jackie smashes it on the ground.  Jackie says, "I almost sacrificed our son, I had to destroy it."  Larry replies, "they made me leader but I forget that I had a partner but my supremely beautiful wife, that I will never forget again." Jackie and Larry start to have some sort of weird alien sex and Marty escorts Debbie out.

Marty tells Debbie that he is never going to be what he hoped he was going to be an so he reached. Debbie tells him that he is much much more than she hoped he would be be and she had high hopes.  The two begin to talk about the house in a positive manner for the first time. Larry, Jackie and the rest of the Zabrvonians appear and say that they are so happy that the Weavers are staying.

At the end of the show, Marty and Larry are bonding in the space pod. Larry says, "even though we made amends with one another, she insisted on carrying the argument over later into the evening."  Larry replies, "they do that, but sometimes you have to have a good long fight to clear the air." When Larry says, "you won't be hearing from her anytime soon," Marty gets a concerned look on his face and asks what he did to Jackie.

Okay, I admit that I laughed a few times in spite of myself.  I did find it interesting that though the male Zabrvonians carry the babies, they all perform very strictly by gender.  I loved the fact that it was an interracial cast, even though race was clearly not an issue because the bodies they wore were not really theirs. The Zabrvonians were charmingly odd and it is clear that gender is something this show intends to play with.