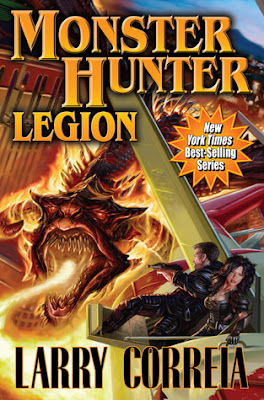 Z and his fellow hunters are attending the first every International Hunter Convention in Las Vegas. A unique, happy opportunity to network with fellow hunters, check out the shiniest new toys and hear about hunting techniques from all over the world. And have a brawl that ruins the dining room, but that’s a side point.

That’s before Special Task Force Unicorn, the government organisation that uses the supernatural rather than just destroys it, calls with a job for them. There’s a creature on the loose that needs killing – but the bounty seems unnaturally high for the simple kill they find.

Except they haven’t killed it – they’ve brought it back with them to the convention. A creature released from Decision Week, a time when the US was exploring ways to use the supernatural to end World War 2, and it’s a being every bit as bad as you can imagine. Hunters have lots of experiences to fuel those imaginations.

How do you fight an intangible force that can throw absolutely everything at you and can come back from the dead? And how much can they lose before they stop it? More – how does this link in to the sinister pattern all the Hunters have been seeing, a vast uptick in terrifying supernatural activity around the world – all suggesting something big is coming. Something apocalyptic, if you listen to Z’s father.

A large part of the attraction of these books is the glorious action-movie feel to them. Sometimes you just want to read a book about blowing up the gribbly things with lots of explosions. It’s not exactly the highest or more sophisticated desire, but it still makes them pretty fun reads.

But it would be a mistake to dismiss these books as just being a mix of gun drooling (which I don’t care for) and massively impressive, epic fight scenes. There is a long, sustained meta-plot that has been developed from the very first book. The story keeps growing, the world getting richer and more and more characters are added to the mix, each of which add their own pieces to the overall story. This isn’t just a “see bad thing, blow up bad thing”, every bad thing they blow up adds more to plot and adds new allies and new players.

Even the story of this book itself is as much a mystery as it is a survival horror. The monster isn’t something that can be simply blown away with a sufficiently large gun. Tracking it down, discovering exactly what it is, exactly what it can do and how something like that can be stopped while sparing as many lives as possible is not even slightly simple. It’s also a story full of well written emotional content. Z’s worry about his wife, about the people he cares for are very well written and carry a lot of emotional impact. It adds a level of tension to the story that is exceptional – especially since so many stories rely on creating menace for the protagonist who, in general, we know is going to survive. You can still create fear and tension that way, but it’s hard to do. By creating not just threat for Z, but also for his loved ones – real, fascinating characters the reader is already strongly invested in – then that tension is really well maintained since any of these characters could die.

Beyond worry for his friends and family, the decisions Z makes is another source of excellent emotional writing. Z has to make decisions, and some of these decisions leave people to die – which echoes back to book one where he was on the other side of someone else making that decision. I’m almost glad that some miracle doesn’t take away the cost of these decisions, that the emotional cost and impact isn’t magically mitigated.

There’s also the complex relationship Z has with both his father and his brother. Both fraught with tension and a lot of bad experiences. Trying to reconcile with his brother after what happened to him in the last book is an emotional mine field.

Despite all of these strong emotional elements we manage to avoid the usual interminable pages of angst you would expect. Far too often when you see the words “powerful emotional scene” what you get is moping, pages upon pages of self-pitying monologue and a whole lot of pouting. This was woven into the story in a natural and flowing manner and didn’t derail the flow or the pacing. It adds to make him more human, more of a person while keeping the story moving.

This book further expands the world, linking more of the past events and creatures together into an overarching whole. By seeing the various monster hunting organisations together we can see how they work and interact. We get a greater insight into Special Task Force Unicorn (and a reintroduction of Heather) and what that means, more on Franks’s history, more on the past of the world and how the supernatural has been integrated into history as well as the greater pattern giving a truly menacing feel to the, as yet, unknown enemy that is stalking the series. Again, a lot of good information neatly integrated into the story.

Despite all these heavy themes and the natural heaviness that comes with survival horror, it’s also immense fun. Tanya and Edward together are an excellent team. Holly never fails to crack me up, and Skippy sacrificing a chicken to the rotor spirits of his helicopter is awesome. The Management was interesting and fun – and even Z’s constant irreverent observations make him not just an epic character – but a fun one as well, which makes up for his ungoverned tongue and quick temper.

In diversity terms we have a large cast of POC. Many of the hunters, including Z’s immediate team are POC. Z himself is mixed race. There are few cultural markers, but, equally, few stereotypes. Alas, there are still no GBLT characters. I was worried that women were being sidelined which is a shame after the previous books. Most of the hunters are male and most of the hunters that take part in the action are male as well. Worse, when the casino is sealed off, Holly, one of the major, active female characters is sealed off. Tanya, the new elf hunter isn’t exactly an aggressive fighter and made a poor substitute. We did have Julie – but with her being pregnant, Harbinger instantly become protective of her. It suddenly became vital for her to live for her child than her to be involved as she wished, which wasn’t something I liked much.

But a lot of this was averted. Holly because a vital and integral part of the plot – and was just as brave, tough and dangerous as she always was. While Julie was urged to flee, she ended up coming back with the big big big gun, determined to be involved. Even Tanya, while not as physically adept, averted both gender and class stereotypes by walking rings around the intellectual hunters. She’s the Trailer Park Elf, but while the scientists are gathered around trying to figure out exactly what’s happening, Tanya strolls in and shows them just what they’re getting wrong. Maybe the men tried to sideline the women in this book, but the women weren’t having it and pushed themselves back to the front.

I started reading these books expecting explosions and fun coupled with an irritating amount of gun drooling which I didn’t care for. I got that – but I also got an epic and powerful meta plot, some major character growth, some powerful emotion, a lot of laughs, a deep and rich world with obscure monsters round every corner, and mysteries that really require thinking through – I was surprised and pleasantly so – and very happy this book is maintaining the pattern.