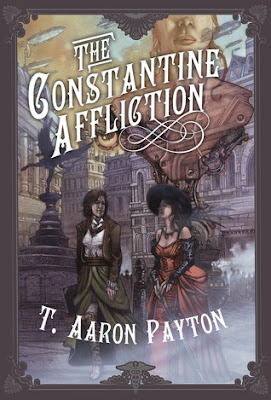 Lord Pembroke, Pimm to his friends, is a dissolute, alcoholic younger son of a Marquess. And to be a real embarrassment, he had a hobby as a detective, how scandalous. Despite his familial disapproval, he will keep involving himself in criminal cases where his surprisingly able mind has lead him to great success.

It’s because of that reputation that he has been approached by Mr. Value, a man of poor repute who wishes him to investigate the murder of his prostitutes – and he’s willing to use blackmail to make Pimm accede to his request.

Ellie is a journalist who is determined to be treated as such. Unwilling to go to Paris to report on the latest fashions and instead pursuing stories of greater import – and scandal. Including going undercover into one of the infamous clockwork brothels. But while there she is quickly caught up in a scheme that goes far higher than respectable gentlemen frequenting a house of ill repute.

And she notices that Lord Pembroke, famed detective, is also involving himself with some rather unsavoury characters – perfect for a journalist to investigate.

Together they try to unravel the murders, but the plot goes far higher – to the very top of British society. Along the way they find the animate dead, a machine that makes brain talk, clockwork automata and disturbing revelations about the Constantine Affliction – the new disease stalking London that turns men into women and women into men.

I do love a good steampunk world – which this book certainly has. It manages to convey a true sense of the time and the place – you can feel Victorian London in this book, which is impressive considering how different this London is from actual Victorian London. With walled and domed Whitechapel and the many myriad inventions that so characterise steampunk – clockwork automatons, alchemical lights and all the other anachronistic, fantastic inventions – it’s a very different world. It’s one of those steampunk books that has really hit the language and the attitudes and the behaviour just right to give it an authenticity and a realness.

I also love the characters. Pimm, the alcoholic, dissolute younger noble son who has the terrible bad manners to actually have a productive and useful hobby, the very idea. His casual enjoyment of life, his breezing through things with bags of style, all covering a brilliant mind. Freddy, with the Constantine Affliction, still leads her life as she wishes, fighting against restrictions and having a great time doing it – and Ellie, determined to become a journalist, a real journalist, no matter what, uninterested in fashion and frippery her editor likes to push her towards, she’s determined to find the dangerous, the exciting and the seamy. They bounce off each other really well as a team and a group and I really hope for more from them – and a series - now they have been introduced because they work so well together.

Even side characters are really fleshed out with strong personalities – Adam’s tragic, sinister earnestness. Big Ben’s quiet, respectable nobility even when forced into a criminal life. Oswald’s classic Mad Scientist – they all work really well.

The story itself is a nice mystery. I won’t say it’s baffling since it’s pretty obvious from early on who the big bad guy is – but not the extent of his schemes. Following Pimm and Ellie as they negotiate this great world to find all the pieces of the puzzle is definitely a good read – it’s decently paced with enough interesting additions to keep it interesting. Especially since, even though it seems obvious who is involved, it’s far less so in tracking down exactly how and why – and at the end the whole plot opens up into a direction I never imagined or expected.

If I have one complaint it’s that there’s a little too much exposition. There’s a lot of somewhat contrived dialogues while the characters explain the plot or the world to each other and even a full blown villainous monologue (albeit a very well done one). Because so much changes in the end of the book, there’s a sense that lots of exposition needs to be packed in to explain it all. It makes the book a bit heavy at the end, when it should be charging forwards with long periods spend pondering or discussing things.

One of the great themes in this book is one of science and ethics. Of how progress can bring many incredible things, new knowledge, new technology that make so many lives better – but links that with the importance of ethics in scientific exploration. The arrogance of “ends justifies the means” thinking and of setting scientific truth and exploration above the well being of people. This is especially pertinent in a steam punk setting where, of course, there are immense scientific advances, technology, wonderful gadgets but set against a time of industry and development that so often trampled on the rights of people.

One of the cornerstones of this book is the Constantine Affliction itself – it’s a disease that causes the infected to either die or transform, physically, into the opposite gender. So man contracting the Constantine affliction becomes a woman and vice versa. One of the main characters, Winnifred “Freddy” was afflicted and became a woman.

And this is used to great effect to explore and discuss the rigid gender roles of the era, which I will cover in a moment. But while it’s used as a tool to explore gender roles, it completely fails to have even the slightest analysis of being in a body that doesn’t match your actual gender. These people aren’t trans, but they face a trans-like situation and there’s no analysis of that. All of Freddy’s frustrations about her body becoming a woman’s is to do with sexism – the rigid gender roles forced on her, the sexism in society – but nothing on body dysmorphia, gender identity or anything like that – it was as if, should the gender roles of society disappear they would have no problems at all. In fact, some of the afflicted with female bodies “disguise” themselves as men not to present as their real genders, but just to reassume their place in society. Similarly, women who are changed into men are seen to rejoice at all the doors opening up to them – again, no problems at all for having a body that doesn’t match their gender. It’s all about gender roles – and its’ great that gender roles can be analysed this deeply, but it feels like these issues have been used to explore gender roles and completely ignored the trans issues that should very much have been a part of it as well.

This is further problematic by the fact that the Constantine Affliction is an affliction – it’s a disease. And no just a disease, but a sexually transmitted disease that has largely been spread by prostitutes.

On gender roles, the book does an excellent job of challenging the ridiculousness of rigid gender restrictions, especially the gender restrictions of the era. From the minor, with Pimm minding his language around Ellie, quite unnecessarily, to Ellie having to use a pseudonym to write, to Freddy’s frustrations with the clothes she must wear to the activities she is limited to, we have a constant display of the societal sexism of the era. And they’re constantly challenged and displayed as ridiculous – the male bankers, accountants, lawyers et al who are transformed into women but still disguise themselves as men are no less capable in their jobs; for that matter, women who are transformed into men and reinvent themselves are not in any way lesser in their jobs. Ellie is a skilled and much praised writer. And in the end the charge against the enemy is not lead by Pimm and Big Ben – but by Ellie and Freddy.

Despite all the challenges there are some issues which aren’t quite covered – but we do have a general mockery of the gender roles in total which provides its own challenge. So the constant refrain “gentlemen have urges” used time and again to justify the brothels is never directly challenged, but the whole ridiculousness of gender roles itself is.

But there is a problem with the way sex workers are treated. Again, we have another book where prostitutes are the victims of crimes and many of the characters dismiss them as expendable – though, I’m glad to see, not the protagonists. Pimm expressly humanises them, presenting them as women with families and loved ones who will miss them. We also have Adam, and Margaret that, again, humanises her considerably and makes her a real, full person rather than just an expendable prostitute. The problem is that part of the way Margaret is humanised – because part of it rests on her desperation. One of the ongoing conversations on prostitution is one of pity – and whether sex workers deserve it or not: inevitably based on how poor they are, how many other options they’ve exhausted, whether they use drugs etc etc. Margaret is pitiable because she is forced into sex work, not chosen it through “base desires”.

But this does lead into something the book does cover extremely well – class. Even with the protagonists being firmly upper or at least middle class, there is still considerable discussion of how lower class people are considered expendable. We have the sex workers, but also Big Ben’s story of his cousin – as readily killed and tossed aside the in the factories as any of the sex workers who were murdered. Or his own path to a life of crime caused by trying to avenge his sister who was raped by a wealthy lord with no repercussions. The casual way the destruction of White Chapel and the East End is treated by Oswald – we have a clear indication of how the lower classes are valueless in society.

As is common with Steampunks, we have only a veiled hint at GBL characters (generally regarded with distaste) and POC are considered some exotic, alien other and in some other far flung corner of the empire – we got some side references to the Steel Raja and his steam powered war elephants, but only in the sense of him being a terrible threat.

This book covers a lot of really deep issues and social commentary – though it does ignore some important ones which the text begs to have explored. But it does so in a way that fits naturally with the story. The plot continues with these powerful messages, un-derailed and undistracted. The characters are fun and engaging – I genuinely liked them and would love to read the next book for them alone. The world is a classic steampunk world – beautiful and rich and full of dichotomies that a proper steampunk should be – and it is presented in an authentic and realistic manner. The story is fun, it flows naturally and is definitely worth a read. Despite its problems, it’s one I’d recommend

We received an ARC of this book through Netgalley
Posted by Sparky at 3:00 PM