Review: Power in the Blood by Angelia Sparrow 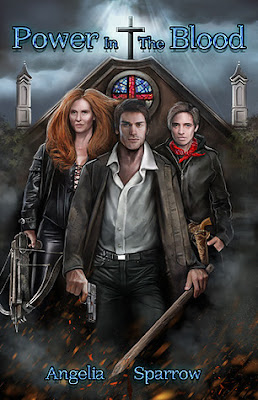 Oren is a Breather, so are his kids. If they die of natural causes then that will be it, they will die peacefully after leading a human life. This is what he hopes for – both for himself and his loved ones.

If they die violently, then they become the Undying. Immortal, doomed to live and regenerate for all time. It’s not a fate he wants for himself or wishes on his children.

But vampires are making that hope awfully difficult. A new church is in town and they’re recruiting  - and turning – members at an extreme rate, much to the worry not just of the Undying, but of the legitimate vampire community as well. They hope to bring the second coming by turning everyone into a vampire – and they already have enough numbers to quickly turn all of Memphis.

But to stop them means tolerating – and working with – other Undying, each with their own agenda. To say nothing of the Council that would love to turn his Breather family into Undying if they can – and that’s without the threat of combat

But this isn’t generally seen as a good thing. It’s fascinating how the extent of this is analysed – not just the fact that an immortal is going to see all the people they love around them, I’ve seen that covered before. But things like culture shock – how even people in their late middle age today can have trouble keeping up with the latest innovations, how much do you have to struggle to keep up with the curve of hundreds of years of advancement?

And it covers the trauma of dying. An Undying can regenerate from anything, but the vampires know that and don’t just kill them (and inter them in cement) but kill them in horrific, agonising ways. Regrowing from a head (and having to have cement scraped out of your sinuses) is pretty traumatising – but to be tortured slowly to death before hand? Repeatedly? The cost to their sanity of being traumatised over and over again is so extreme that most of the older field agents are extremely divorced from reality and houses in a torpor-like state. Yet these Sleepers are roused in need to become near-mindless shock troops – it seems very devaluing of people with severe mental illness – especially exposing them to the very triggers and conditions that caused the illness in the first place. I would have liked to see more emphasis on treatment and therapy or even retirement for them – especially Undying like Gilgamesh and Leilit who were apparently very reasonable and functional – but with levels of eccentricity peeking in.

It’s an interesting concept and side to explore and a pretty unique one – and shows some level of respect to what trauma can do to a person - that it can’t just be shrugged off. But, at the same time, I would have preferred some nod towards how the treatment of the Sleepers is poor.

The characters are interesting and fit the concept of this world. We see the hard lives they lead and the toll that takes on them – and how vampire hunting precludes any real income generation – which in turn causes hardship and difficulty. It’s interesting following Oren and his concerns as well as Brett and the uncomfortable expectations that are falling on him and Brigette, tired of so much of the family relying on her. They’re very strong characters with powerful concerns and motivations.

The story itself is pretty much an action romp. I think the character interactions – the Kid and the outside world, the Kid and other Undying, the Kid and Jacob, Ann and Oren, Ore and his family – all play a greater role in this story than the plot. The plot does allow the characters and the world and the setting stand up and be seen.

The problem is I’m left with a sense of “and…?” because even though it told a closed story it just seemed rather basic. There weren’t any twists, there weren’t any subplots. The possible conflicts arising - like the Council trying to make them all Undying, Erzsébet and her schemes, dealing with Sleepers who had lost their grasp on reality, and Jacob being an extreme Undying that the Council would like to bring down just didn’t really arise or were dealt with with minimal conflict and development. It left the story feeling a little like “RAWWR vampires, gather group, deal with vampires, job done.” Just a bit… simple and linear with opportunities missed. Especially since some of the wrongs done – by Jacob, by the Council, seem to be rather brushed over or accepted with a shrug – and I’d expect some of them to be worth eternal vengeance. All these were raised but none developed or even hinted that they would be developed in a later book. So I’m left wondering why they were raised at all.

The book has several POC but I wouldn’t say any of them are in a major role – but there are a lot of them. From the Chatalaine of the Council to Ann’s mentor to several other historical Undying. In particular of note was Jesus, presented as an Undying and, for once, as a POC. Not only that but it was interesting how he was developed and presented – as a peaceful and earnest man moved to violence at need not desire. And a man who wasn’t best pleased by how his name was being used. It was notable when the religious devotees racially abused him as a “hadji” and even attacked him; which is an act full of social commentary.

I’m much less comfortable by the leader of the vampires of Memphis. Dr. King – yes, the Dr. King. I’ve said before that I’m uncomfortable with recent historical figures being used in fiction like this, and that applies doubly for a man who was such a social leader and represents such a majorly important movement to Black people, which makes it extra troublesome for a White author to use him this way. I won’t say the portrayal was bad – he was presented as a man who could hold a room in awe, a man who held iron hard convictions, a man who was deeply respected and a man who could hold an entire room with a speech. But I was not comfortable with this, especially since comparisons are drawn between the vampires and human rights movements like the civil rights movement and the gay rights movement. I don’t see it as necessary, considering he didn’t play a major role.

This book had a very casual and accepting attitude towards sex that was interesting to see. It also normalised bisexuality to a degree that is also rare and certainly beats the heteronormativity that is so prevalent in the genre and fiction in general. But it still had elements that were less than ideal to say the least. Firstly, all of these characters are either vampires or have vampire DNA – which is already given as a reason for their hyper and constant horniness – but one of the priests also presents this as why he is having bisexual feelings (in between lots of religious judgement of same-sex attraction) – presenting bisexuality as something that has been caused in these characters by the vampire DNA.

The contrast between the relationships is also quite strong. The relationship between Oren and Ann is sexual but also mutually supportive, there is warmth there; we also have enough insight to know that Oren loved and misses Terry, his dead wife. With the man on man side of the equation we have a seductive “twink” who sleeps with, well, everyone. The whole family – openly with extra creepy passing back and forth between the dad and the eldest son. And making out with the 15 year old youngest son. There’s a free and liberal sexual environment and complete lack of any kind of personal and sexual boundaries. As a bonus, that guy turns out to be betraying them all – and faces the inevitable for it. Jacob and his little harem is outright torturous and abusive, based on brainwashing and misogyny (contrast that sharply with the Kid and Brigette).  Oren kisses women – but it’s rare for him to kiss a man, and though he’s fine with his kids bisexuality, he’d also be happy for his son to “try women first”. We also have the line about finding “Miss Right or Mr. Right Now.”

There are no woman on woman scenes, but lots of suggestions with Erzsébet. That’s Erzsébet Bathory. If your lesbian inclusion is the Blood Countess (and, while the actual historical figure has some controversy around her “conviction”, this fictional depiction did not). And Ann – but her relationships were historic and ended with her lovers burned as witches – now she’s with Oren.

It seems like there’s a lot of sexual attraction between men and even a lot of sex, but a lot less between women – and sex between opposite-sex couples is placed above same-sex couples. Just having lots of men having sex and graphic sex scenes doesn’t change these underlying heterosexist ideals.

And, aside from that, the sex seemed a distraction, especially in the beginning of the book, there were more sex scenes than the plot had room for – it took the place of more interesting plot development that could have happened instead.

I liked Ann as a tough, hard drinking, hard fighting, hard loving but still fun woman from Puritan times who kicks arse and is the match of any man there. She’s a whole lot of fun and goes a long way to balancing Oren keeping his daughters in support roles while his sons fight – though his daughters are both technical experts that keep the family working.

The book had some good elements and raised some good issues. But I felt the story was a bit flat and it certainly had its problematic elements. On the whole, I don't think what was good about the book carried what was poor.

A copy of this book was provided for review
Posted by Sparky at 3:00 PM