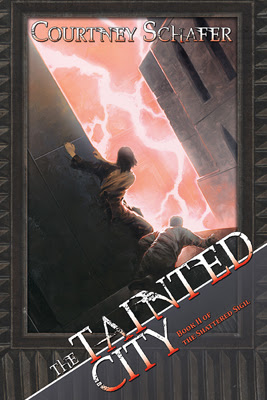 Dev and Kiran are unwilling guests of Alathia since crossing the border from the lawless, magic rules city of Niravel to free Kiran, a blood mage, from his cruel master, Ruslan. Dev is desperate to return – if he doesn’t, his friend’s daughter, Melly, will face a terrible fate without someone to look out for her, and time is running out.

They do get an opportunity to return when Alathia’s border wards start to fail. Something is happening in Niravel – and Ruslan is suspect, but the magic goes far beyond Alathia’s wards – seemingly killing wizards, threatening Niravel’s fragile water supply and possibly even threatening the city itself. Captain Marten of the guards leads an embassy to Niravel to help investigate, but that’s easier said than done in a city as corrupt and cruel as Niravel when you have to make severe sacrifices and work with unconscionable enemies.

Dev finds himself in the city, trying to find a way to rescue Melly and save Kiran from Ruslan – again. While at the same time finding himself both betrayed by Marten and having to work with him to save those he cares about. It’s a balancing act of trying to solve the mystery, save those he cares about while worrying about them falling into either Ruslan’s or Marten’s grasp – neither of them can be trusted and both are looking for levers with which to control Devlan.

I made the mistake with this book of picking up book 2 of a series. That’s less than ideal for any book – but particularly for a High fantasy novel. After all, if an Urban Fantasy vampire refers to “Chicago” you know what they’re talking about. If Dev refers to Alathia I don’t know if that’s a place, a person, a concept or a pet cat.

So I started reading this book thinking I’d made a massive mistake, I was hopelessly lost and there’d be no way I could give it a fair chance. But I held on, kept reading and it all fell into place – the world is well established, it doesn’t have any inconsistencies or weak points and is realistic enough that I could pick up even this fantastic world relatively quickly. It also helped a lot with how the world building was presented. It can be difficult for fantasy authors not to info dump. They’ve created this wonderful shiny world and they want to show us all of it – even if it’s not relevant. This author resisted the temptation. There are enough side references to let me know there’s a whole lot more out there and a whole lot more that can be explored over the course of the series, but there’s no desperate urge to tell me everything now and drown me in unnecessary minutiae. When it’s relevant it’s explained, when it matters, it’s explained. It made not just for an interesting world and good pacing – but also meant that I quickly got my bearings in the story. I still think it’d be a good idea to read the first book first (yes, I’m just conformist like that), but not having read it didn’t become a barrier to enjoying this book.

And I did enjoy it. It had a series of nuances in the story – something far too much fantasy lacks. The characters had multiple motivations and grey areas in their morality and world view with a lot of tolerating evil for the sake of achieving a greater good. The mystery and the investigation is good mainly for letting us explore the world, how the city works (and get me acquainted with things) but also is nicely complicated by the multiple threads – Dev’s worry for Kiran and Melly, his lack of trust for Marten and ultimately having to save the city while working with Ruslan – even while suspecting him as being the culprit behind the deaths.

I love the way this book examines “end justifies the means” thinking by repeatedly showing its victims – whether it’s the way Dev and Kiran were betrayed by Marten, how Ruslan hurt Kiran to bring him back to their family or even the utter goal of trying to stop and remove a truly corrupt and dangerous city – but at what cost? The manipulations – and willingness to sacrifice people – on the past of the “good guys” are not presented as rosier or happier or more right than the manipulations of the “bad guys.” Sure, the good guys have a more pure and more noble agenda – but that doesn’t change the evil and the cruelty towards their victims and Dev doesn’t let Marten forget that even though he has to work with the wizard, he doesn’t trust him. The only complaint I’d have is that he allows Marten’s assistants a few digs about “trust” which I would totally not have let go – but that’s just me. And it shows how invested I got in the story that I felt angry and outraged on the characters’ behalf. Yet, at the same time we have a character who is utterly unflinching in his rigid morality, yet annoying, judgmental and, clearly, utterly unable to achieve anything. He’s certainly a good man, even a righteous man and willing to sacrifice to save complete strangers – but he’s also ineffective, clearly not capable of navigating the world he’s in and pretty unpleasant. It’s a nice contrast between extreme “ends justifies the mean” thinking that will consider anything, no matter how questionable or wrong versus rigid refusal to compromise leading to dogmatic adherence without considering any other possibilities.

Which brings me to the characters – I love the characters in this book because they’re all very real. From marten and his manipulations and conflict over them, to Lena’s conflicted morality, to Cara’s free and easy ways covering her serious dedication to Kiran’s much abused world view. Even the bad guys – Ruslan and co and Dev’s ex are all very human with human motivations and understandable world views. You can see real people making the decisions of all these characters, their emotions feel real, their actions understandable, their view points, even when wrong, are ones you can see actual people having. I was engaged for the protagonists and the book got me rooting for them and angered by those who stood against them – which is high praise for any characterisation.

Inclusionwise this book has a lot of POC, the protagonist and many of the side characters are POC – and while they obviously don’t follow Earth cultures being a fantasy novel, we do have cultural difference between people of different origins, even in a cosmopolitan city with lots of mixing. Race isn’t just a matter of skin colour but comes with the ethnicity and practices of different culture.

This book has some good female characters – the determination and skill of Cara who also brings a brightness to book which is often so gritty. There’s the moral centre and conflict of Lena. There’s the enigmatic and cruel Lizaveta and I can’t get past the idea that she may be manipulating Ruslan and be the true power behind the throne and there’s even the painful, cunning yet redeemed Jylla. There are some other female characters but they are in minor roles – which is rather my problem with the female characters – they’re all rather minor. Lena is the least present of the main 4 Alathians, Cara appears relatively briefly, Lizaveta is the least important of Ruslan’s cabal and Jylla only makes a brief showing at the end. Add in that Lizaveta, Jylla and Cara are all largely defined by their relationship with men: Lizaveta as Ruslan’s lover/fellow apprentice, Cara as Dev’s love interest and Jylla as Dev’s ex-love interest – and that we hear of Alissa, the woman whose death Kiran of the value of life and the evil of Ruslan – as yet another woman whose presence in the text was related to a male love interest for whom she was “fridged.”

I would have loved to see any of these women take a more active role, or a role that wasn’t so related to the men around them. I liked them all as characters – as I liked all the characters in this book – but they deserved more presence in the book itself.

Once I got into this book I enjoyed it and even though I rarely read high fantasy now, I’m sorely tempted to track down the first book so I can fill in the gaps and the background of this story – I already know I will be checking book 3.

We received a copy of this book from Netgalley
Posted by Sparky at 3:00 PM