Last night, NBC aired the pilot of Mockingbird Lane.  This is essentially an updated version of The  Munsters.  Herman is no longer green but he is still the caring Frankenstein father who cannot get along with his father in-law. Portia de Rossi was great as Lilly monster and Eddie Izzard was awesome and charmingly evil as grandpa.  It was nice to see a vampire on television who was not filled with emo angst and desiring some teenage girl who doesn't have the sense of a concussed penguin.
To date, there are no plans to air anymore episodes due to the cost.  I think that this is a real shame because this really and truly could be a hit as far as I am concerned. Unlike many shows in this genre, it's more than clear that NBC spent some money.  The special effects were absolutely awesome.  For example check out Grandpa all vamped out. 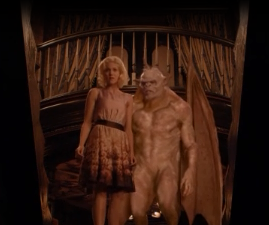 Now, that's what I am talking about. There were no significant changes to the Munsters we all know and love. Marilyn continued to be irritatingly human as always.
This episode was based around a prepubescent Eddie. The family is forced to move to Mockingbird Lane after Eddie ravaged his scout group on a camping trip.  This trip did come with a bit of fat shaming that I could have done without though.  The munsters decide to tell Eddie that he was thrown in the bushes naked rather than tell him that he has become a werewolf.  This is a decision that of course Grandpa is very much against as he completely embraces being a Munster.
Herman is having some problems of his own.  Herman loves his heart because he sees it as the key to loving his family and it is his last original part.  When this heart starts to fall apart, Herman is desperate to keep it but Grandpa warns him that it is time for it to go. When Eddie's new troop leader is invited for dinner, Grandpa sees him as a potential meal and Hermain sees him as a potential heart donor.  The human of course is absolutely oblivious to the danger that he is and actually says that it feels like being welcomed into the family.
I have seen some terrible reboots of classic shows over the years and I don't think that Mockingbird Lane fits into that category.  It was fun, paid great homage to the original and brought something new to the table.  That's about all anyone can ask.  Even if NBC were to tune down some of the special effects, like Eddie's pet dragon, I still think that this would be worth the watch.
I've embedded the video below for those who missed it and would still like to check it out!