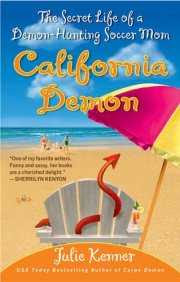 Kate is back, juggling the life of a soccer mom and now a full time demon hunter – dedicated to ridding the city of infernal monsters and keep it safe for her children. In between doing the shopping, taking her daughter to the mall, getting her 3 year old in child care and ensuring there’s a meal on the table. Add in that her husband is running for office which means she hardly ever sees him as he runs around for campaign donations – and she’s inevitably dragged into important social occasions she’s neither interested in, nor has time for. It’s hectic. It’s even more hectic when the only person who knows about her demon hunting secret is her best friend, Laura.

And the demons are certainly present – forcing her to kill one and leave its body in her daughter’s school, which is always awkward. The demons are plotting something, something that could invoke the worst of the worst demons out there – and something that may easily catch up her daughter in the process. Finding the answers and protecting her family is only complicated by messages from her ex-husband’s past, a secret she never knew, her own daughter’s curiosity – and a new hunter in town. One without the ties she’s used to – but one who knows far too much about her, and her dead husband Eric’s past.

This book is very fluffy – which makes it a fun, light read. Kate’s fumbling around her life is pretty amusing (albeit not always funny) and the contrast between fighting demons, stabbing them in the eye and having to dispose of the body on the one hand and then facing down snarly, unpleasant PTA members on the other is jarring in all the best ways. This book also added some more on to the world building with the imprisoned demons and the plot to release them which adds a level of what’s at stake and the consequences of failure. But in some ways I think the light hearted, fun nature of the book detracts from any sense of epic; it’s not heavy enough or gritty enough for the horror of the consequences to come through.

The only problem I have with the writing is probably unsolvable without damaging he book’s premise. The whole point of this series, the thing that makes it novel and unique, is that Kate is a harassed mother trying to juggle her parenting and family duties with her duties as a demon hunter. To maintain that theme, we have to see Kate through all her juggling of kids, child care, PTA dramas, volunteering etc etc and it’s not very interesting or engaging. But if you cut it, then you lose the entire theme and purpose of the book itself. But this also makes me look at the series itself and wonder at how it continues for another 5 books because the gimmick is feeling stale round the edges

The book isn’t very fast moving – I have a feeling that all of the plot was kind of shoe-horned into the end. We had some random fight scenes and lots of questions at the beginning (and lots of mummy duty) but few answers and actual progress. This is further exacerbated by some decisions that just seem to be there to fill up pages (randomly patrolling for random reasons in random areas in the vague hope that a demon will attack them – which merely seemed to cost them sleep and/or run further risk of Kate being caught by her husband).

And I feel there are things that are hinted at but could use development – perhaps it will come in later books, but they felt hanging here. Are we heading for a martial strain plot with her and her husband? Are we going to look at Laura’s divorce? Does Eddie actually have a point? I’m not saying I particularly want any of these storylines to go further (Kate in a love triangle in particular is not something I look forward to) but don’t raise them and let them whither. There’s also a fair bit of redundancy, especially in telling us about Kate’s feelings. Her frustration over her husband, her love of her family, her guilt over failing – a lot of it is repeated over and over again – maybe for emphasis but it can come across as a little obsessive or even like she’s trying to convince us of something she doesn’t really believe (especially when it comes to loving Stewart – she spends so much time grieving for Eric and then thinking of him and so little time with Stewart except expressing her frustration that her turning round and saying “I love him” over and over feels… hollow, but that did improve later in the book).

In terms of characters we have some good developments – Laura knowing the big secret has turned her from the much abused, poorly valued best friend to super-hero support staff that I’m much happier with. Similarly, more of her family learning the big secret at the end of this book does promise for a change of direction. I also do like Kate – not necessarily as a person but she is a very real character. She is harassed, yes many of her problems come from not being the most organised person in the world. Yes she does worry about petty things that aren’t that important and agonise over relatively minor events. She is busy and very centred on her families, she has emotional contradictions – frustrated by her husband’s constant absences, frustrated by the battled with her teenaged daughter, constantly needing more time, irritated and mildly ashamed by her lack of domestic goddess-ness. She’s a very real character.

Inclusionwise, this book manages to avoid overt issues like the first book, but it’s still completely erased of any minorities. That’s 2 for 2 and not ok.

It’s a fluffy read, it’s a fair bit of fun. It drags in places but is generally worth the time to read it. It does suffer from clashing themes which can pull down any elements of epic in the story. But it does have a good concept – even it is a gimmick – a very real main character, a fun story and a general fun read. It could use some severe inclusion and some of the side plots are extraneous – but equally development of those side plots could give this series some much needed depth. So, it remains moderately decent fluff, shallow fun and the potential for more.