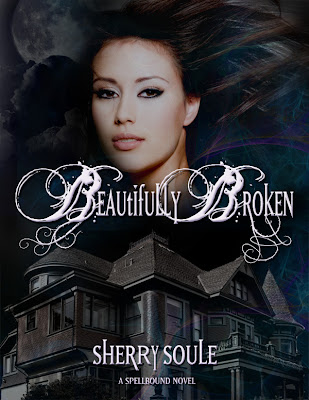 Shiloh Ravenwolf is different. She can see things that no-one else can see, shadows that shun the sunlight and feed on her fear. Demons that stalk the night and whisper her of debts unpaid. And she has powers and abilities she cannot fully explain, but increasingly sees as part of a family legacy that has been kept carefully hidden from her – even when she needs those tools the most
And she does need them – with the town being even more spooky than usual, labouring under a curse and with an increasing number of young people disappearing – including people she cares about. She has to dig into the history of the town’s most haunted house and her own family history – as well as learning to master her powers and her potential.
And then there’s Trent, the gorgeous and intriguing new guy in town who seems very interested in her.
We have a town cursed and demons lurking about leading to the disappearance of children. We have magic and mystical beings and demons and ghosts, which is a nice shift from the more corporeal monsters we normally see. We have a young woman coming into her legacy of magic, with two heritages to draw upon. We have her learning and growing as a person, in magic, in personality and in relationships. We have a family torn and turning against itself between morals and magical practices. We have a chosen one who has the power and the legacy without being so typically annoying with it. We have a decently racially diverse cast and mystical founding families which isn’t a sloppy code for “more white folks!” We have a teenager with minimal high school drama and even a love interest who isn’t abusive (though he is repeatedly described as cocky or giving mixed signals despite not doing either). And while the protagonist starts as a Bella-style klutz, she quickly forgets to be.
We have a lot of elements that could have made this book very very good.
Like many books, however, this concept is just utter derailed by the writing that I found really hard to get into. It’s overwrought, it’s grossly melodramatic and I strongly suspect the word “anthracite” has appeared on the author’s word-a-day calendar lately. In fact, it’d help if the characters just used to word “black” to describe something that is black. I felt like burning a thesaurus by the end of the first few chapters. And there’s a lot of really excess description – do we really need to know what Shiloh’s best friend’s hair smells like? Really? The dialogue is often long winded and I think it’s meant to contain humorous banter but it just falls really flat. The conversations feels convoluted, long winded, repetitive and generally aren’t particularly interesting and are covered with far too much of Shiloh’s personal exposition and often repeated feelings.
The world building is intriguing in parts, but most of the witchcraft, magic and Wicca lore feels less researched and more like lots and lots of watching Charmed. There’s a huge amount of info dumping going on but not a whole lot of information passed on nor are any of these really fascinating concepts I mentioned really developed at all. Shiloh and Evans can have entire chapter consuming conversations which add little in the way of story development, character development or even world development. They’re just longwinded and rather dull to wade through.
Despite all the info dumping and Shiloh learning, I didn’t think the character developed. She changed – she went from nervous, shy, fearful and having little faith in her looks (and, yes it was classic “oh I am so thin, I wish I had curves like her friend – whose curves seem “excessive” next to hers of course) to confident, brave and accepting of her beauty. It’s a good sign of growth – but the change sort of just happens. She reads books and dates Trent and changes into this new person – she doesn’t grow into it, she transforms.
The general pacing of the book was just very very long. The dialogues were long, the infodumping was long, the story seemed to go on a long time with events but no actual depth to them – and a whole lot of exposition. Towards the end it picks up, but by that stage I’d lost all interest and was reduced to skimming the book – especially when we had a completely unnecessary side trip to a secure mental hospital – again, adding nothing to the story, the characters or the world. And Madison? Was there really a point to her? The guarding shadows? The Trendies at school (because we simply must have some Mean Girls)? There were a lot of extraneous elements that didn’t seem to add a great deal to the plot.
Inclusionwise we had some POC in the town and Shiloh herself is half-Native American. There are hints of culture about her and we briefly see her Native American father and grandparents but… it feels like it’s primarly used to give her woo-woo and then the woo-woo isn’t even used. Still, I think I prefer that to the inclusion for the sake of magical power more than culture, portrayal and presence. She also had some good POC friends, they didn’t make a major appearance, but they were distinctly there and there was a strong sense of the town being diverse.
There was complete GBLT erasure – but her aunt and grandmother made for strong female characters that nicely countered the villain of her mother.
There was a gem of a concept in here, but I can’t even comment on the story or the characterisation because the writing just left me bored. It was a chore by the half way point to continue reading this book, I’m afraid. I was bored, I was engaged and the demon could have eaten her at any point because I just didn’t care what happened to the protagonist.

A copy of this book was provided for review
Posted by Sparky at 1:00 PM