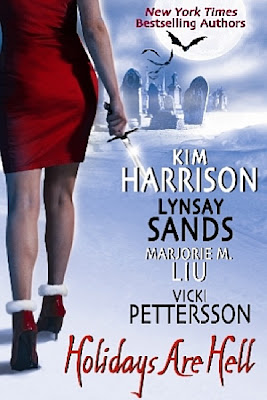 Like all anthologies review, we’re going to look at the stories in this separately and then consider the book as a whole.

This story follows Rachel Morgan from the Hollows series, as a teenager before she joined the IS. This is the moment, mentioned in the book, when the young Rachel accidentally summons the ghost Pierce  when trying to summon her father and with him manages to foil a crime for the IS. This is where Rachel’s path is set where, still recovering from her illness, she begins to see what she wants to do and why.

I had read this book in a book of short stories so already knew the plot. I think this is one of those anthology stories that perfectly hits the balance between having something for readers familiar with the series while, at the same time, providing enough information to get new readers interested in the world.

The world was presented ideally without overwhelming excess knowledge, just enough to keep people informed and understanding what’s happening and why it matters. It can be hard in any kind of fantasy short story to get across a sense of the world and all the relevant information without infodumping huge chunks of world building on people. I think here you can see what the Hollows is about, get a brief introduction to the main character and still have a story that is fun and engaging. Had I read this book first, I would have picked up the Hollows

For people who have read the story, well as I said in the review of In The Woods, there’s nothing here you need to know. You don’t need to read this to learn everything about the Hollows and it doesn’t tell you anything you don’t already know. But it does add  emphasis and depth, I think Rachel becomes a much more understandable character – especially her reckless behaviour and need for challenge and need for validation – when you see this snap shot of what her life used to be like. It doesn’t develop the character per se, but it adds an extra shading – it adds some “why” to the “what”.

Six is a Chinese secret agent, raised from childhood to be the best of the best and to hunt down and defeat terrorists and other threats to the nation. She is skilled, competent and dedicated but completely unprepared for a world of necromancers and Jiangshi vampires. She has to run with a strange foreigner who has powers she doesn’t understand or trust to try and eliminate a threat that was far larger than she imagined – and one that means she cannot trust any of her usual resources. While running with him she re-analyses her life and what she wants from it – and finds there is more to her existence than duty and service.

It is nice to see a story that didn’t follows the same myths and legends of the west we’re so used to – the Jiangshi are a very different creature and a story set in China – without trying to exotify the country. I liked the characters, who were Asian, and I liked the setting as pretty original and, above all, I liked the story. It was fast paced, action packed and didn’t spend pages after pages dwelling on internal monologue and world building. It was quickly, concisely presented and that was it, we were into the action, the world unfolding as it was needed. Even the romance was presented in a relatively brief, concise fashion – not rushed or hurried or abrupt, but without excessive rumination and monologues that is so common.

As a short story it was tight, self-contained, precise. I don’t think this is part of any world of the authors, but it did show off a very clear, well paced and fun writing style.

After being caught up in an accidental science experiment, Jill finds herself hunted by a scientist, a former colleague of her brother’s, who is determined to examine her and find out exactly what she is and what she can do.  She runs through the town during the Christmas parade, trying to find the man who seems to always be able to find her – aided by her long term crush, Nick who has an awful lot dumped on him awfully quickly. They run a cat and mouse through the city, while trying to keep their Christmas celebrations – and their first date – alive.

Unlike many short stories in anthologies, this story doesn’t seem to be part of a world or ongoing series, rather being a short story in its own right. And, I have to say, I wasn’t enamoured of this story and won’t seek out more.

The relationship isn’t awful, since it rests on 6 months experience rather than being a love at first sight - but the story and, especially, the paranormal elements of it just fall flat for me. She’s running here there and everywhere to escape someone trying to kidnap her - but she takes time to go to a Christmas parade and go to a Christmas party? And she shapeshifts constantly in what seems mainly to be a ploy for her to get naked again and again.

And him? She suddenly reveals 1) she likes him, 2) she’s being chased by a violent kidnapper and 3) she’s a shapeshifter in about 10 minutes and he completely takes it in his stride. It’s like she just told him she dislikes chocolate – a little surprising, perhaps, but in a second he adapt and joins in the stalker-hide-and-seek. Will someone please call the police – and no, the whole “he will expose us” doesn’t make sense because what he’s saying makes no sense. For that matter, he managed to get in a science lab? He tries to abduct people on the street and doesn’t see why a room full of nice people would object to him talking about slicing bits off someone! How can a man that divorced from reality even walk down the street without being stopped, let alone work in a major science laboratory?

Also, one line about everyone laughing because they think a guy is gay is not great and pretty immature. Struggling, desperately, to maintain it through the story is just ridiculous. Are these characters teenagers or the adult shop owners and scientists they’re supposed to be?

Frankly, it felt beyond contrived, the characters were ridiculous and it wasn’t much fun to read.

The Harvest by Vicki Pettersson

Zoe Archer has given up her place as the Light’s Sagittarius and has been reduced from powerful super-hero to mortal. It’s a drastic come down for her, but just because she is human now doesn’t mean she can rest. She became mortal to protect her daughter and now her granddaughter needs her help, to get the baby out of the hands of the Shadow Agents and their leader, the insidious Tulpa and into safe, hidden hands. That means reconnecting with the agents of the Light she has ignored for 6 months, including her ex-lover Warren, and returning to the Tulpa – to his home, to his side and to his bed, which she infiltrated 16 years before for the sake of the Light. She has to save her granddaughter, and prove that a human mind still has surprising power.

I have read the whole of the Zodiac series which made this short story a much better book for me. If you hadn’t read it, I think you’d probably be lost. There are just so many concepts and so many abstracts in this series that I don’t think it lends itself to short stories without lots of info-dumping or lots of concepts only half explained.

The same goes for choosing Zoe as a protagonist was an awkward choice- while she’s not a main character, who she is, what she’s doing and why is all really tied up in the series protagonist, I’m not sure how much impact anything in here would have on someone without the back knowledge. I can’t see this story drawing you into the series because there’s just too much to absorb.

As someone who has read the books it didn’t add anything in particular except further cement the my dislike of characters I already disliked. With an extra bonus of portraying Warren, a man we’re supposed to see, at least partially, as a force for good or Light, merrily slaughtering Mexican immigrants. It would have sat better if he were just hunting rogue agents, but the way it was presented is hard to see outside the context of persecuting immigrants.

In all, I wouldn’t say it was a bad story per se and, as someone who read the books, it added some interesting concepts to the strong themes of human imagination and malleable reality that the main series has established – but I wouldn’t call it a must read for people who have read the series, nor would it have pulled me to the Zodiac series if I hadn’t.

On the whole I think this book had one good story, one decent story, one fairly poor story and one pretty dreadful story.