The Neighbors, Season One, Episode Five 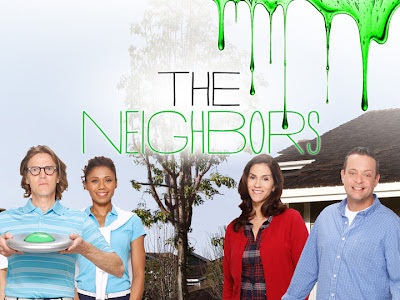 The Neighbors is being recapped and reviewed today because I mistakenly believed that it was on hiatus this week. Sorry about that folks, and next week, The Neighbors will appear as usual on it's regularly scheduled day.

The episode opens with The Weavers driving around scoping out houses to take their children to for Halloween. They see a house with no car in the driveway and drawn blinds and Marty believes that it will mean a bucket full of candy, with a note which says, "please take one." Marty and Debbie high five each other saying, "suckers." From the backseat Amber says, "excuse me parents, you're setting a bad example for your children. I hope you're aware of that."  Debbie responds, "do you have any idea how long your father and I have fantasized about not taking you shopping in an apartment building?" Marty actually has to ask several times what the family favorite holiday is before the children get around to saying Halloween.

When the Weavers return home, they find the Zabrvonians electrifying the fence of their gated community and nailing wood across the windows. Marty sends the kids in the house and asks Larry Bird and Jackie Joyner-Kersee what's going on. Larry Bird says, "Every year since we've arrived, on the last day of your October, tiny devils have gathered at our main gate ready to invade." Okay clearly we have yet another case of culture clash going on.  This schtick is becoming old fast. Debbie explains that they are not being invaded and that the kids are just celebrating Halloween. The Weavers bring the Zabrvonians into their home and show them the costumes the kids are making. Debbie suggests that the Zabrvonians stop preparing for war and start buying candy.  Jackie Joyner-Kersee says that it all seems harmless but Larry Bird does not concur.  Larry replies, "ever great leader in history is defined by the threat he protected his people from. Your Churchill had Hitler, my father led the invasion of Uranus, and I protect my people from October 31st. Every year, I guide them safely through the evening and they celebrate me for it. It's my war and I want to keep it."

On the bus, Dick Butkus tells Max that all of the other kids are putting together Halloween costumes and he feels so alone because he does not have one.  Max tells him that he can put together a good easy costume easily.   Dick tells Max that Larry Bird believes Halloween is dangerous.  Max says that Marty is super into Halloween and that they do a costume together every year. Emma interrupts the conversation to invite the Weaver kids to go with them and says that they go door to door without their parents. At the high school, Reggie Jackson approaches Amber about her costume and agrees to go as the universal mandate to match her costume as Obamacare.  Amber admits that she is gaming her parents, as she intends to use Halloween to jump start her popularity. Abby says, "despite my better judgement, I have decided to sex up my costume this year."  The popular kids walk by and the girl argues for the boy to wear a costume as well because she doesn't want to look like a slut. When they walk by, Amber tells Reggie Jackson, "Gossip girl does have a point.  I can't be too obvious about it. I have to be stealth sexy. It's got to be a thing. Okay Reggie, you can be my costume partner." Amber packs up her stuff and says that they are going as a slutty nurse and a hot doctor.

Back at The Weavers, Debbie is pinning Marty's tail on and Jackie admits that she explained to the rest of the community The Weavers interpretation of Halloween. She admits that this is their first human holiday, that the Weavers are their first human friends and that they would like to learn more about it. When Debbie asks about Larry Bird, Jackie says that she told him that his hair looked limp and he will be deep conditioning for hours. Marty tells Jackie that they would be happy to help but they have their own celebration to get ready for. Amber walks in picks up her costume and says that the skirt needs to be shorter and the neckline needs to be deeper.  Debbie asks if Amber is making a statement that without healthcare people won't be able to afford full length skirts and Amber replies, "yeah totally." Amber decides to make the alterations herself and heads upstairs. The Weavers start freaking out because they have realised that Amber has outgrown punny Halloween costumes and has gone slutty. Max and Abby enter the room and throw another wrench in The Weaver Halloween plans. This year, Max wants to be a zombie like all of the other kids and Abby no longer wants to hold her parents hand. Marty sits on the couch and asks Debbie whats happening and Jackie interjects and says that they now have the time to teach them about Halloween.

Inside the house, The Weavers show the Zabrvonians a magazine with costumes in it and say that they can dress up as anything that they would like.  Larry Bird interrupts and asks how the Weavers know that the people who invade their gates will not be concealing weapons. When Dick Butkus says that it seems like a stretch, Larry Bird asks him, "whose side are you on?"

Halloween night, Amber is standing in front of her parents dressed up, and they are not impressed. Amber says, "if it's any consolation, I'm not to happy with myself."  Amber shows up to pick up Reggie and Jackie Joyner-Kersee is dressed like a character from The Hunger Games.  Okay, even I have to admit that the costume was awesome. She asks about Reggie Jackson because she is late but finds that Reggie is dressed up as the sexy nurse because he assumed she would want to be the doctor.  I actually really liked that but it all goes horribly wrong when Amber says, "we can go as sexy nurse and Asian Transgender."  Really?  No, seriously, really?  Do I even have to say why this is wrong?

When they leave, Larry Bird comes downstairs in full disapproval mode.  Jackie tells him to lighten up and that not only is she participating in Halloween but Dick Butkus is as well.  When Dick rings the Weaver doorbell, it turns out that he has dressed up as Debbie because he admires her.  He even has a Marty Weaver puppet.

Kids are lined up at the gate of the Zabrvonians community and Larry Bird gives a speech to scare them. He suggests that the Zabrvonians should all be scared to have an opinion that doesn't align with his. Larry opens the gates and the kids scream, "let's go" and start running. This terrifies the Zabrvonians and they all take shelter in the home of Larry Bird. The kids start to knock on the door and Larry Bird reminds the Zabrvonians that he warned them all about Halloween and encourages them to fear strangers.

The Weavers head out trick or treating with Max and Abby.  Max has no problems running off with his friends, dressed as a zombie and though Abby said she was going to the doors by herself, she holds back.

Jackie Joyner-Kersee does some ego fluffing and reminds Larry Bird that Halloween is only one day a year and that he leads them everyday. Larry points out that he works so hard and even works weekends. Jackie says that the Zabrvonians don't need to be frightened and that all they want to learn but to learn they need a leader.

Abby finally builds up the courage to approach a house, though Marty and Debbie do everything to dissuade her.  Dick Butkus uses his Marty puppet to make a comment about using fear to manipulate their children.

Larry Bird finally admits to the Zabrvonians that there is nothing to fear because the so-called invaders, are just kids dressed up in a costume. When the doorbell rings, the Zabrvonians scream and so Larry tells them to be quiet and watch him.

Abby is successful getting candy and even off loads some of the candy on her parents in order to run a candy scam.  Max returns and asks to go with them for fear that one of the girls wants to be his girlfriend. Max says that he is not ready for all of that and that half of him still hates girls. The Weavers are relieved because they now feel that their kids still need them. Amber and Reggie Jackson approach and say they left the party early because there were 85 slutty nurses there and Reggie adds, "but only one exotic ladyboy." Amber tells Reggie that this was not a compliment and says that she has more self esteem than the average 16 year old. Great, so they dealt with the sexist way in which women are expected to preform Halloween but in the process threw in some transphobia, for shits and giggle.  For every step this show takes forward, it moves three back.

Larry and Jackie are sitting on the couch after the last trick or treater has left and he says that he just wants to sit back and enjoy the holiday with his two sons.  When Dick and Reggie come in, they are of course dressed as women and so Larry gets up and says, "I'm sorry, this holiday is just not for me."

Obviously The Neighbor's comment on transgressing the gender binary in the episode was extremely cissexist.  You don't wear people's identity as a costume and if the aliens didn't know this was wrong, the writers of the show most certainly should have. I like that Amber realised she didn't have to wear a revealing costume but I don't like the idea of calling women sluts who chose to wear a revealing costume.  Slut is a genderized term meant to attack a woman's sexual choices and it is sexist from beginning to end.