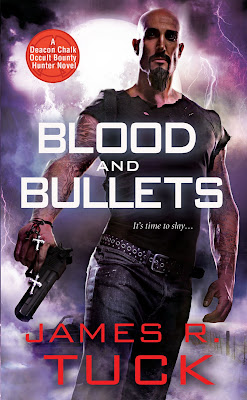 Deacon Frost lost his family to the monsters, something he lives with every day. No longer have a reason or desire to live, he goes out and hunts them, without regard for his own safety backed up by victims and survivors

But now he is the target – an elaborate trap has been set up to catch him and another would be hunter is being used as the bait. The problem is he doesn’t know who is targetting him or why – but if he can’t find out why he is the one being targeted – or even if he is the target – he and everyone around him is at risk

This is a power fantasy, a pure male power fantasy and an action film. Deacon Chalk (yeah, his name as well) fights like a demon – or an angel rather since he has the super special angelic blood, with a whole host of shiny guns, drives a super fast shiny car, is harder than nails, kicks more arse than an entire military unit and looks awesome doing so with his huge muscles, leather and bad boy sexy tattoos. All the women around him are gorgeous and love him. He’s kind and heroic to the downtrodden while always gruff and tough, of course. And he has deeply tragic past and cries manly tears while beautiful women sooth him – but it drives forward even more ruthless because he no longer cares if he lives or dies.

It’s no good, this needs a super action movie voice over.

In a world of vampires, demons and monsters, one man stands between all that is good and the darkness. Marred by tragedy he will give anything, fight anything, sacrifice everything in an epic battle for the fate of humanity! Women want him, men want to be him and evil runs in fear from him. He is Deacon Chalk!

This is this book. It’s corny, it’s cheesy, the main character is ridiculously, perfectly awesome who is regarded with universal awe and reverence. He cannot buy take away food without being hailed as a saviour. He’s enlightened, tough, he has literal ANGEL BLOOD, an awesome fighter with the coolest toys. He could have a thousand women (all beautiful and all want him) but he is still so tragically hurting so they just admire him from afar and kiss his cheek (seriously, 99% of women in this book kiss his cheek, it’s like a compulsion) he runs his own strip club manned (well, womaned) but ladies he’s saved who all adore him, he has his own priest as back up (a priest who was a former sniper so kicks some arse, but he is not Deacon Chalk, of course). He wades in among literal hordes of vampires slaying them in their dozens – lesser hunters may kill a vampire, but not Deacon Chalk, he kills 50 vampires, 100, he kills them with a small knife and his hands tied behind his back and likely makes them flee with his terrible manly glare (we need a chorus insert here of breathy awestruck women gasping “Deacon Chalk”).
Ok, a nice power fantasy action movie style book isn’t entirely a bad thing. Sometimes some fluff and blowing up the big bad monsters with a protagonist who just shits awesome can be a fun, fluffy, mind deadening read. It can, I admit it, I even like a good action novel with nothing but cheesy over the top fights and god-like heroes who are ridiculously, gloriously perfect. It’s a guilty pleasure and I shamefully admit it.
Buuut… even action fluff books dripping testosterone and stinking of cordite need to be well written.
And this really really isn’t. It is hopelessly, unbelievably over-written in a truly mind boggling fashion. Take Deacon Chalk for example; given the givens you would expect us not to know too much about him beyond his arsekicking. Far from it, we know a lot about him, his likes, his dislikes, his opinions, beliefs, hobbies, tastes. I know all about what sushi he likes (and, of course, he has a sushi named after him). I know about his cars, in extreme and painful detail that would make Jeremy Clarkson flinch. I know about all of his guns, all of his weapons that aren’t guns. I know about his clothes and the whys behind his clothing choices. I know what cologne he wears. I know about the other cologne he also sometimes wears. I know about his musical taste. Oh gods, do I know about his musical tastes. I actually suspect the author may be required to plug this music it’s mentioned so much.

Beyond Frost I know vast amounts about all the monsters in their myriad forms, history, setting, other hunters (though the nod to other characters in the genre was cool). In case it’s not really clear – the info-dumping is really really REALLY strong in this book.

And it’s not just info-dumping, it’s also really long winded info-dumping with a lot of description. When the book begins we have his memories of his dead family triggered – this is followed by 4 solid pages of description about it and describing his gun. I didn’t even know his NAME at this point. We get the same kind of description all the time – so often things are described in the longest winded way possible – even telling the time he describes the positions of the hands on the watch face. He describes the weather, he takes 3 paragraphs to describe an alley.
And it’s repetitive. Far too much of the info dumping is then included in the next info dump and the next one as well. The combination of these 3 things means that the story bogs down to a ridiculous degree – it becomes claggy and clunky which would be bad for any book – but for an action adventure like this is several times worse. Such books rely in drama, excitement, a hectic frenetic pace – not this meandering ramble. There’s so much dumping that the information that could be fascinating – like the art of staking a vampire – ends up being lost and adds to the frustration.
I would say it goes without saying that, minority-wise, this book doesn’t do well, but that’s unfair to other fluffy, grizzly action books that have at least made a pretty decent attempt at inclusion. The women in this book all want Deacon Clark, all of them. Even the enemy. In fact, the big bad enemy gives up considerable tactical advantage because he agrees to let her grope him. No, really. In fact, her desire for him seems to be the only thing that stopped her from repeatedly killing him when she had the chance. And they’re pretty much all beautiful, seriously we have another form of Dresden Goggles here, because all the women are beautiful, they all want him, they all hug him or kiss his cheek (I think he’s painted his cheek with crack or something because it’s almost compulsive how many need to kiss his cheek). They’re also primarily damsels – they either need rescuing or have been rescued (or are evil vampires). Even the awesome werespider is saved by Deacon Chalk. And it’s amazing how many of these women are teeny tiny women – over and over we have delicate little women against his BIG MUSCULAR TALL MANLY HUGENESS.
Almost needless to say, we have no GBLT characters. In terms of POC we have the beautiful Japanese sushi-serving tengu (who is beautiful and loves Deacon Chalk because he saved them) appearing briefly. Some evil vampire prostitutes (Black and Latina) who are killed. The big bad evil sexual villain is strongly implied to be a darker skinned. And we have Charlotte – a werespider and a Black woman. And I think this is a classic example of how different tropes affect people with different intersections of marginalisation – because while it’s nice to see a woman in this book who isn’t helpless – and Charlotte isn’t, she’s the one woman who steps up for the big fight and is as dangerous as almost anyone there (except Deacon Chalk of course). But in a book full of dainty, teeny-tiny white women who need protecting and rescuing, having the one woman who is dangerous be a tall (almost as tall as Deacon Chalk) animalistic Black woman is deeply problematic.
There were some bright points in the story – the lore behind the vampires origin was interesting, Longinus was a nice twist with added world building. And the world seems to be truly vast. We also had some interesting shapeshifters beyond the usual fare of werewolves and big cats – a weregorilla and a werespider (which I’ve long wanted to see because there’s a long tradition of spider-shifters out there). I also liked the inclusion of and development of Larson as the amateur hunter.
This book could have worked. Ok, it was never ever going to be a piece of high art replete with nuance and meaning, but it could have been fun – immense fun. It has every potential to be, even now, because the foundation for a fun, gory, action packed read are there, even if the characters are a bit over the top even for this genre. But the writing would be terribly overdone in any book – and in this particular kind of book it’s a killer.