The Devil You Know (Nick Engelbrecht #1) by K.H. Koehler 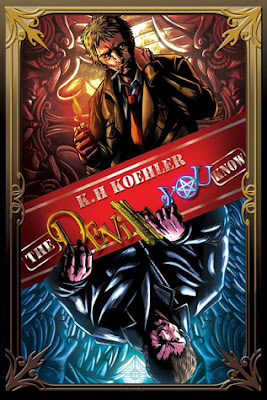 Nick is a daemon, and not just any daemon – he’s the son and heir of Lucifer himself. Yet he tries to avoid all that, focusing instead on being a witch and part owner of an occult shop with his friend and business partner Morganna.

Until Vivian enters his life, a fellow daemon, hunting by Seraphs (warrior angels with no sense of humour who would very much like to pound daemons into the dirt). Sparks quickly fly between the two daemons, even if Morganna doesn’t approve.

Nick’s also an ex-detective and is called in by local police when they need help from someone in the know and with his woo-woo – such as when a small child disappears in mysterious circumstances. Nick’s sure there’s more to the disappearance than it seems – but is also heavily distracted by the issues consuming Vivian’s life. Especially when the two appear to be linked and the enemy discovers him, Lucifer’s son, as an excellent prize.

This book has massive props for originality. Nick is a daemon, the son of a demon and a mortal woman. Actually, he’s the son of Lucifer and a mortal woman and Lucifer’s heir; not just a paperwork exercise, he’s expected to step up and take over just as his father did from his grandfather.

He and his dad don’t get on, as can be imagined – and that not getting on is rather well done. There’s a combination of revulsion and rejection of what his father is and stands for, linked with his abandoned-child desire for acceptance and respect coupled with a fear and shame of not reaching his father’s standards. And all of that is done without pages and pages of angst and moping.

Nick as a character has a lot of intriguing elements, as does Vivian, his love interest. Together they have a lot in common and not just their heritage – they’re not saints by any stretch and they don’t pretend to be. While Nick has a conscience that he does apply and lines he doesn’t cross, he’s also not a nice person and doesn’t have many illusions about that. Sometimes this goes too far into behaviour that crosses from “not a nice person” to “inexcusable arsehole” but usually doesn’t – it’s a balance that needs to be addressed. In general he’s quite deep and involved with a strong level of characterisation to make him very compelling very real, someone you want to get behind and support while, unfortunately, having moments when you want to punch him a few times.

Vivian and Nick’s relationship generally works for me – it starts out purely physical and more than a little based on the woo-woo.  There’s no desperate love at first sight – there’s a lot of lust at first sight and a lot of obsession at first sight, but not love. There are moments when he’s overly defensive of her, especially when Morganna isn’t a fan – but it reads as much as him objecting to Vivian being dismissed because of her daemon blood as much as him loving her. We do get very very high levels of trust and affection between tem awfully quickly, but a lot of that is explained by the situation they’re in and lack of other options – so, generally good especially if you’re willing to go with the positive spins, some unfortunate speeded-up-relationship issues if you’re not going to buy the story’s plot justifications. Personally, it worked for me.

The story itself is one of those excellent plots for a first book. Involved, intriguing and twisty enough to be a great story in its own right, while at the same time dropping enough information to set up this excellent world with its angels and demons, witches, various monsters and Nick’s own heritage and what that means. Both fit together quite well and the plot isn’t used as a hollow excuse for the world building and nor is the world building ignored in favour of the story. It’s pretty well balanced – and I did like the story a lot, it twisted, it was unpredictable, it was pretty nicely paced and had a number of compelling characters. It did have several different storylines that came together perhaps a little clumsily – especially since we started with one, left it and didn’t pick it up as the main thread until very near the end of the book. On the whole it worked, it needed some trimming and smoothing out, but it really did work well and it was one of those books where, when it ended, I felt disappointed that the story was over.

The writing style is a little more hit and miss. It’s written in that hard boiled, film noir style, reminiscent of early Laurell K Hamilton (who was really good at it). It has a lot of dramatic monologues, a lot of what would be, in any other book, infodumping. It largely works. Largely. The problem is that Nick’s sarcastic, slightly callous, darkly cynical viewpoint fits the style – but his humorous, fun loving, rather light trickster side? Doesn’t fit it at all. Sometimes I think he’s trying to lampoon film noir, then he plays it straight – one or the other, not both. The tone jars and occasionally what is dark and evocative film noir commentary becomes a guy who really needs to not talk to so much. Even if he is funny.

So, generally pretty good, right? Well, no because when we look at marginalised people we hit a great big break wall and get some Problems.

Firstly, Nick likes the word c*nt. He likes it a lot. Any woman annoys him? That word comes out of his mouth. A lot, really really a lot. He’s also very violent towards women – more so towards women then we’ve seen him act with men. A woman doesn’t answer his questions or annoys him and he advances on them menacingly, threatens to hit them or grabs them by the throat – including Morgana, his best friend and business partner.

The women themselves are interesting but with shaky elements – Morgana especially and she makes it clear that she’ll rip off Nick’s hand and feed it to him if he tries that again. I wish we’d had more Morgana because she would have helped boosting the overall portrayal of women extremely well – she had her own life, didn’t tolerate being abused, has her own power and is sexual without shame. There’s vast potential in her – but other than her having sex with Nick and warning him off Vivian, she’s hardly there. Beyond we have a predatory and manipulative reporter (who, it’s strongly suggested, uses sex to get stories – oh and has slept with Nick. Like just about every other woman in a 20 mile radius) and Vivian, the love interest and rescued victim. Vivian is an interesting character on her own – she certainly lives life her way, having rebelled all her life. She cares for her brother, has accepted her past and seems to very much pursues what she wants – including Nick. She seems to have a fair bit of depth and background while certainly not perfect or a saint. But in the whole book she’s either being saved by Nick, having sex with Nick, begging Nick for help or, in the background, being trained by Nick.

But she’s also a daemon, like Nick, and part of her power is sexual – So the question has to be whether all that confident sexuality is linked to daemonic forces and influence and I’m also concerned with what will happen later in the series with her decision to save herself. On the nature of sex positivity, every woman seems to want to have sex with Nick – even complete strangers offering a quickie in a super market, so it looks a lot less like sexual agency and a lot more like Nick’s daemonic charms. I’m also pretty sure she’s evil – Morgana has warned Nick, the angel warned Nick – she just needs to carry a little sign “totally evil and will betray you later!”

More fraught is the fact that Vivian was abused as a child – and liked it (she even thinks her abuser went to other girls because she wasn’t afraid). She does say he forced himself on her and it wasn’t consensual, but she presents it as a matter of indifference to her – including his other victims. Later we have a villain in the book also be sexually abused as a child who returns to her abuser to have his child (for plot reasons). That’s two examples of abuse of girls rather fraughtly handled with a strong suggestion of co-operation from them. Later, we see Vivian had issues from her abuse and fear of being blames and shamed as so many victims are, and Nick assigns her casual dismissal of the abuse to Stockholm syndrome rewriting history. Similarly, the villain kills her abuser once she’s finished using him – but it’s rocky.

The main character, Nick, is bisexual – now a GBLT protagonist is something that always makes me perk up and pay attention, and then all too often cringing. And I’m flinching here. Nick is bisexual – but in this book her only has sex with women and only mentions in any detail the sex he has had with women. He also says “I bag girls – and guys who look like girls”  uh-huh. Nick’s bisexuality serves 3 purposes in this book – 1, Vivian wants to watch Nick and another man have sex (yay, fetishism!), 2 one of the locals can call him a f@g and make homophobic comments (he also does this to a lesbian couple living in town who are a one line mention. And for some reason one of them is arrested for public indecency). And 3, his ex-police partner was brutally and horrifically murdered by people who assumed (wrongly) that Nick was sleeping with him. Yes, lethal GBLT sexuality, it’s dangerous stuff.

Oh, and all of the angels are repeatedly and constantly described as looking gay. Apparently that doesn’t mean wearing rainbows with linked mars-symbols tattooed anywhere.

In terms of POC, we have Ben, half Native American half Black and is his police link. He’s not a bad character per se, but we don’t really see much of him to make a judgement. And a Latina domestic servant who is superstitious and woo-woo aware. So, to say the least there’s large scale for improvement. Oh and a Black prison guard. But we do have that annoying appropriation habit of calling

We have 2 disabled people in this book – and while I do like Vivian’s blind brother, Josh and hope he is developed further, both he and the disabled baby exist to be people to save, rescue and protect. That’s kind of the sum total of their roles in the book. I have hopes for more from Josh, the musician and as someone who was a mentor for Vivian.

So in all? I love the story and the world setting as wonderful things I enjoyed and would read again. I also think the series has a lot of potential, vast potential, to be develop excellently as well; I’m looking forward to future books in the series and seeing where this actually goes. But, there’s some fails there that made me cringe and made me uncomfortable, as well as some stylistic roughness that needs soothing out.