Cult, Season 1, Episode 4: Get With the Program 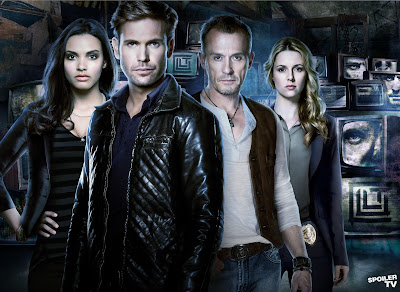 Starting on the show: We begin with a professor making a podcast criticising Billy Grimm and his cult. When someone comes to his door he starts in panic – but it’s only Kelly leading a woman, Rebecca, in handcuffs. She’s a cult member and Kelly says her husband was involved in kidnapping her sister. An no, Rebecca’s not under arrest – but Kelly brought her to the professor because he was the one who “deprogrammed” her.

Then the lights go out and spooky laugher is heard – followed by a flashbang grenade. A group of people come in, tase Kelly and rescue Rebecca – and kidnap the professor.

To the real world with someone contact Jeff, telling him that their husband had also disappeared because of the show. They don’t know if they can trust Jeff, but are willing to try.

And to the set of Cult where Skye brings Marti (the actress who plays Kelly) some research and learns from the make up artist, Lexi, that everyone things she’s sneaking out and sexting Jeff (her denials are not believed). Marti gets rid of Lexi and has her own questions about Jeff. Skye tries to defuse the idea that she and Jeff are love interests except her phone keeps ringing with texts from Jeff.

Jeff and Skye wait to meet the person who contacted them – and Skye has plenty of misgiving and warnings since there violent True Believers are out there. They’re approached by a man who comments on their notebooks about Cult. He and Jeff have some not-quite horns locked posturing after which he concludes that Jeff isn’t one of the True Believers. With his assurance, the woman Jeff’s come to meet feels safe to talk to them. She and her husband, Rami, were fans from the beginning but he became more and more obsessed – until he was kidnapped. The police didn’t want to know when it seemed Rami left voluntarily (especially when the show was mentioned) and the guy with her, Terrence Ross, specialises in finding people lost to cults. She also has her husband’s notes – and a copy of the disc that Jeff used that erased all of his data. She used it on a networked office computer (bet her boss loves her – ever wonder who the people are who click on the “hi remember me from school?” emails? Uh-huh there she is) and, without personal information, it doesn’t destroy the machine or erase itself. Jeff is eager to rush off and check this disc for any info but first he and Terrence need to trade menacing alpha male stares.

As they move off to their cars, Detective Sakelik arrives to warn them off Terrence Ross who is “implicated” in all kinds of naughtiness. Leaving Skye wondering who to trust between the “deprogrammer with the rap sheet or the cop they know is involved”.

At Jeff’s place there’s lots of back and forth while EJ checks the disc and manages to track down the address of where it was burned – a hang out for hackers.

To the show where Billy is teaching the kids how to respectfully slaughter a pig with his signature knife before the professors arrives, bound up in a sack. Billy welcomes him by wiping his bloody knife on the man’s shirt

This is being watched by Detective Sakalik on her phone when her partner arrives with coffee telling her about the wiretap they have on Terrence’s phone. Her phone rings and she spills coffee on herself to get her partner to go look for paper towels so she can call in private – they say they’ve moved Nate to a new location

Back to the show where we have a wonderful idyllic scene, dinner, wine and Billy talking to the professor about kidnapping him and stealing his manuscript. It’s all very pleasant until the camera scrolls out and we see the good professor’s hands have been nailed to the table.

Back to the real world with Jeff, Skye and Terrence arriving at the hacker gathering with loads of people on computers – including a man with a Cult symbol tattoo. When they start to ask questions a whole gang of people flee for the exits, knocking Jeff and Terrence down when they try to stop them. One guy making a run for a car is stopped by Terrence – shooting him with a rock salt round Skye is not thrilled by this. Even less so when Terrence decides he’s going to take the man somewhere for questioning. When Jeff protests Terrence says the man was making the discs – so what is Jeff willing to do? Skye says it’s wrong – but will go with Jeff since he’s going along with it.

To the hotel room where Terrence uses drugs on the prisoner (oh Skye, you keep muttering the disapproving words but keep going along with it.) Skye and Jeff go outside to have some justification rambling and Jeff giving Skye an out until Terrence comes out telling them all he got out of the guy was that Rami was “under a tree.” Which he takes to mean buried. They go in and see him and he’s babbling under the effect of the drug. Skye shows him a clip from the show where Billy is explaining the box symbol of the Cult and points to the tree, Billy’s tree, and asks if that’s what he’s talking about. He says not “on” the show but “at” the show – and no-one at the ranch knows.

Back to the show Billy talks about his son who died and was buried on Cult land and why this inspired him to make the cult – he’s annoyed that the Professor wrote a book about him without mentioning his son. He then shows the professor photos of his family with lots of threat to intimidate him into silence.

In reality the group has gone to the ranch where that scene was shot, to the tree. There they find the pipe which the cast has been dodging the entire time on set, that leads to an old sceptic tank buried near the tree. They search and find the opening with a virtually new ladder inside.

Outside the police station, Sakalik questions Sean, the man Terrence kidnapped, about who picked him up and what he told them.

Underground, Jeff, Skye and Terrence find several pictures on the wall, some of them with crosses through them – and a picture of Nate without a cross. Jeff hears something and, of course, goes running off in the dark. They find Rami who tells them to get out. He’s using UV glow sticks to solve a puzzle. Realising this, they turn off the lights and use it, the walls and ceiling are covered in writing and symbols visible in the UV.

They hear cars and rush out of the tank as people approach, they have to drag and gag Rami who struggles to escape and they have to convince Jeff not to rush the dozen or so people demanding answers – because Jeff is special like that.

Back to the show and Kelley arrives at the compound and finds the professor with his bandaged hands. The professor denies everything and will not speak.

At work Skye checks on the entrance to the tank – and finds it has been filled in with concrete.

The guest actors say goodbye with Terrence and Jeff having a whole “rawr, alpha male learned to respect alpha male, will not kill” moment and Terrence making a remark at how Cult gets under his skin – a cult over the TV with a TV in every home.

At home Jeff and Skye discuss the tank being filled in and question what the messages on the wall were – Rami said he needed them for the “next level” which suggests initiation. Step 1 find messages in the show then the True Believers test you. They also conclude Nate made it through the initiation – and is still alive. Somewhere.

Ok, so they know that Sakalike, the Culty police office is Not Amused with them and is Watching them. So Terrence shoots someone and kidnaps them? Do not give your enemies ammunition on a silver platter.

And Skye and Jeff? This whole “this is wrong… but I’ll go along with it anyway” is the most pathetic attempt to establish some kind of moral highground ever. However, at least there ARE disapproving words being muttered rather than the usual television staple of justifying all kinds of evil crap because it’s the PROTAGONISTS DOING IT so it must be good!