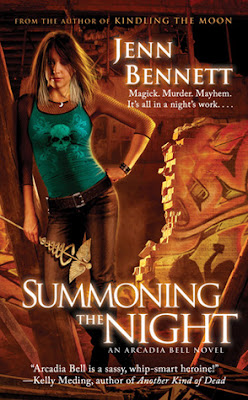 Arcadia Bell has a new life with her parents gone – and the beginnings of a new family with Lon and Jupe, despite her ongoing nervousness about the age gap.

But kids are going missing – Earthborn demon kids like Jupe. And it seems descendants of the Hellfire club owners are the ones who are being targeted – again, like Jupe. The kidnappings mirror a previous series of kidnappers 30 years ago. As the most powerful witch the demons of the Hellfire club know, she’s quickly recruited to help find the children. Something she’s happy to do, despite her misgivings over the club, but quickly it is clear the Earthborn will do anything to force her obedience and encourage her efforts

As Hallowe’en approaches, more kids vanish and the deadline to find the children draws near – and the pressure on Arcadia grows.

Before I begin, it’s going to sound like I am 10 kinds of grouchy about this book, which isn’t the case. Because I liked the book, I enjoyed it and I dashed it off in a day with no problem at all. The problem is a lot of the positives are rather mundane and only worth mentioning because I want to counter the impression this is a negative review. And it’s not – I liked this book, I enjoyed this book. I liked the relationships. I liked the characters. The story was fun, interesting, well written and well paced. The world is broad and interesting. There’s a lot of good here.

And several of the issues I had with the last book are changed – particularly Lon and Cady’s romance which is no longer jam packed with pointless drama for the sake of drama. In fact, the romance was blessedly smooth, happy with occasional moments of angst and doubt due to the age gap, but a refreshing lack of drama for drama’s sake. In fact, her, Lon and Jupe forming their own family are some of the best and most fun elements of the book.

Cady was also a much less passive character than she was in the last book. Now, that’s not saying much since in the last book she did very little esxcept follow. This book is better – she actively chooses to get involved when asked (though, irritatingly, she is then threatened to make her do what she had already chosen to do, undermining her agency). There’s still a lot of following Lon and the ending has an element of random woo-woo saving things for them but she’s more in control in this book than the last. If not in the driving seat, at least she’s called shotgun and has the map – and isn’t in the trailer being pulled by the car. That metaphor made more sense in my head but I’m sure you can follow it. She does have ideas in this book and they largely follow them – but they’re often complained about, some of them don’t work and some of them do work but… well, the chances of them backfiring were high. It’s not spunky agency – high isn’t a certainty – but when your plan involves “let’s give this potion that enslaves people to the sinister drug addict with criminal connections” then there is certainly a high probably of backfire there.

I did not dislike this book. But I am 10 kinds of frustrated with this book for not meeting the potential both this book and the last book has shown. There are a lot of niggles and objections I have which, when piled up, look huge and do come together to be a problem – but don’t stop the book being enjoyable.

I don’t like how Arcadia approaches her powers. I think “my parents wanted it so it must be bad” is such a very shallow reason for her to decide not to use her Moonchild powers. It’s so simplistic and it’s not like she hasn’t had positive affirmation of it either. She’s had months with these powers now and she’s not done anything to investigate them, develop them, research them, practice with them or anything. Demons are calling her “Mother” and she’s just letting it go. She’s even using more normal magic when she could do exactly the same thing for less pain and effort by kindling moon energy.

It feels contrived excuse to make sure the heroine who you have, perhaps, given more power than intended doesn’t then use those powers too much – a way to drag out the development of her power growth slowly over several books by adding a simplistic fear of them which, frankly, is very overdone in Urban Fantasy anyway.

I also love the world this book is set in but wish more of it would be developed – maybe it’s a bit much to tackle the vastness of the demons and Aetheric worlds, but the magical organisations would be nice. Especially with Cady being threatened by the half-demons and her having an in with the head of her local chapter – she couldn’t turn to them for help? An angry presence? A sternly written note? Maybe she could, maybe she couldn’t – because I have no idea how these organisations are supposed to work or what they do. It’s an opportunity missed, especially since, with her parents dead and the conflict about them resolved with it, there’s really a lot less of a reason for her to be so paranoid about her real identity (apart from anything else, she was only ever hunted to stop her telling people where her parents were, there was no indication or accusation that she was involved in their crimes).

This book had a huge screeching halt for me, one of those moments where the train of my thought isn’t so much derailed by a branch on the tracks, as a great big reinforced concrete barrier being slammed in their path. When discussing Jupe’s Knack, Lon finally tells us the full story of his ex-wife and how terribad she is (to such a degree that even her mother and sister keep in touch with Lon more than her and advised him to leave her). And yes, she is a not nice person, using her power of “allure” to violate Lon’s consent and pull him into a sexual relationship. While she’s all kinds of skeevy, the book is very clear that she is skeevy, which I approve of – I’m not against showing badness, merely not challenging it. Which is where we get to Lon.

In this skeevy relationship, she becomes pregnant with a child Lon assumes is his because of her emotional response (discerned by his empathy). He then uses his mind control to stop her getting an abortion – outright goes to the clinic after her and stops her. This is treated as quite reasonable on his part and not in any way a gross violation of her rights over her own body and medical choices. Regardless of her reasons for an abortion, Lon had no right to take that choice from her; her reasons just add fuel because, as an international model, she was right that being pregnant and having a baby could damage her career. And she was right that her current lifestyle and temperament weren’t suited to being a mother. You go on for 2 books about what a bad mother is after you’re the one who decided to force the choice on whether to be one on her?

Then there’s the marriage proposal. During her pregnancy, she said “no” twice – it was only when he asked a third time (seriously, 3 times? How many times does she have to say no to you?) after some pregnancy health issues when she says yes. That sounds a lot like pushing until she’s vulnerable.

Through this recounting we’re shown and meant to condemn her behaviour – which the book does – but none of Lon’s actions are challenged or presented as questionable.

This book also has a Lesbian couple – the housekeepers who look after Lon and Jupiter. They don’t play anything close to a major role – ultimately they’re servants with little presence; I like that they’re there but a Lesbian couple acting as child care and servants for the busy straight folks isn’t great inclusion. It’s also problematic that the running joke is to refer to these married Lesbians as Mr and Mrs. Holliday (because you have to have a man and a woman in a relationship!). And if you’re going to make that wretched joke in reference to their actual marriage, why then constantly use the word “partner” and not “spouse” or “wife.? The other potential GBLT inclusion is the bisexual incubus – the sex demon prostitute who overshares about his sex life and is enslaved to provide sexual services. Uh-huh. Moving swiftly on.

We have several POC in minor roles like Kar Yee (and we really need to see more of her than the Dragon Lady who handles the bar while Arcadia has adventures, even if we do know her backstory), a Latina drug addict who has a few seconds background colour screen time – and then, of course, Jupe. Jupe is a great character, a really fun character, a completely non-stereotyped character. I like him a lot (in writing anyway. I think meeting a kid that hyperactive would have me axe murdering) and I want to fully embrace him if we didn’t have the fact that Lon has sole custody of his biracial son because of his Black mother’s (whose name I can’t remember but might as well be Jezebel) indifference and ineptitude.  We had some references to him living as a biracial boy in the last book but not here.

On the whole, there are some really good character interactions, a real sense of friendship and love between Jupe, Lon and arcadia which really make the book. There’s also a really fascinating world here with its magic and planes of existence that are fascinating and I really enjoy them. The story is decently written, well paced, has a well handled mystery and is great fun. But the minorities need some work, Arcadia could still use more agency in her own story, though it’s much improved and I think we need to back away from the whole “I’m scared of my magic!” trope and explore the wonderful world a little further.