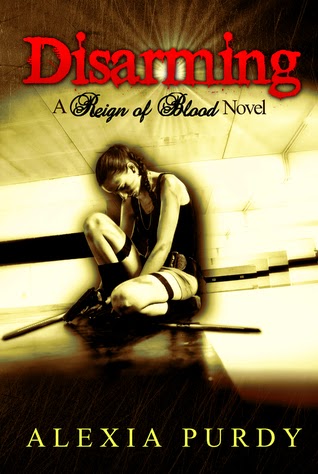 April has her hands full in the dystopian ruin the world was left in by the plague and the rising vampires – especially with her family traumatised and falling in tatters after being kidnapped in the last book. She certainly doesn’t have time for romance

But when she hears of a potential city of survivors managing to hide and thrive away from the vampires, she has to check it out. Alone if she has to.

I finished this book feeling dissatisfied – and I don’t think it was down to the world building (which is a fairly decent dystopian zombie apocalypse with vampires holding the zombie spots with a few unique little additions) or the characters (though I can’t say any of them thrilled me). It was primarily down to structure. I feel like there were a number of story-ettes that were started, kind of wibbled around a bit, and then shuffled away sort of embarrassed. Kind of like a chorus of singers who suddenly realise they can’t remember the words. I think a lot of that comes from the author having an idea of how they wanted the book to end, but not entirely sure how to get from the end of the last book to that point. Which, in turn, may have been because the last book felt like a stand alone (I was actually surprised to find this book existed) which has now been stretched into a series.

Take, for example, the romance at the end of the last book – April and Rye have fought together, done the standard “I cannot be with you but I love you so much” and sealed the deal with the magical-bond-of-insta-love-because-who-has-time-to-develop-relationships. Done, closed storyline (ok, they could actually develop a relationship but that really goes against the All-To-Common-Template that says getting your love interests together is HAPPILY EVER AFTER). This book starts with the two separated (though still drowning in endlessly descriptive sexual tension and moping and lots of “so hawt I wish we could be together”). The reason presented – that April feels the need to focus more on her family after they have been through the traumatic experiences in the last book – is certainly very reasonable but isn’t carried by the story because April doesn’t do that. She has some torn inner monologues about her mother but quickly abandons them in favour of exploring her newest curiosity

So it feels convoluted – like this couple needs to split up for the plot (or not be a done deal), so they’re split up. Here’s an excuse – but it’s a half-assed one that isn’t followed up.

The same applies to April’s curiosity – she wants to examine the city full of humans; which takes precedence over her (repeatedly moped about) split up with Rye AND the family which is the reason for that split up. And why does she decide she needs to rush off and do this alone? Because she thinks the vampire hybrids may try to wipe them out without consulting her – but when we switch to Rye’s point of view, the hybrids seem to be adopting a policy of leaving the humans alone. He could tell her that… but without these leaps of logic and dubious foundation, April wouldn’t have any motivation to go wandering off in dangerous places all alone.

Which is the feeling I get from the entire book (and the pattern continues in  other ways I can’t reveal without spoiling – but that vampire romance bond leaves me headdesking and slightly nauseous by the end of the book). The author had an end goal in mind and wasn’t too fussy about how the characters got there. Those square pegs were going to be forced through those round holes; these characters were going to be in X position by the end of the book and if the roadway to that position was shaky and lacking in foundation – so be it.

On the plus side, it suggests the author has some really exciting and powerful elements in the next book they’re just dying to get to. On the negative side, this book was just fraying at the seams too much for me to enjoy and even where it held together it was just too rushed, too undeveloped and too shaky to realise any potential.

On top of this, the conversation is still really shaky. Everyone speaks like a snarky teenager – an overdramatic, nasty-attitude snarky teenager at that – which gets very old very fast. The word choice can also be dubious, like the last book I think there’s some thesaurus abuse going on here. And can we please stop referring to drinks as “fluids” because that’s kind of unpleasant. There’s some bad repetition as well – I noted a few “curt nods” and a whole lot of smirking

Diversitywise, I’m sure everyone will be completely shocked to find yet another dystopian with no LGBT people (damn those undead hordes find GBLT people super-duper tasty). I think there’s even less POC in this book than the last token appearance – Elijah is referred to as having a “slight tan” which could be an indication of POC (albeit a very slight one) or could be because he lives in Nevada.

I’ve read worse – but that’s really the most positive thing I can say about this book. The world is vaguely interesting but not especially compelling, the characters fall kind of flat but it’s the story and writing where this really begins to fray and fall apart.