Souls of the Damned (Kat Richardson Series #5) by E.S. Moore 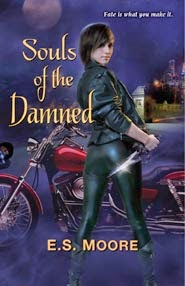 Still reeling from the destruction of the Luna Cult, and beleaguered on all sides with demands for her attention, Kat didn’t expect Sienna to appear on her doorstep

The imprisoned child of the angel Levi in his life-sucking prison town of Delai. Kat has been meaning to take down Delai for a long time – and even promised Sienna she would rescue her. Sienna provides not only someone to protect, but finally a key to get Kat back into Delai

But she cannot go back as a vampire – the only way to get back into Levi’s world is as a human.

I think that the author is recognising that there are too many ongoing threads in Kat’s life. There are two master vampires both with an interest in Kat, one of which is using her as a personal assassin. There’s Adrian and his odd pack of wolves. There’s the Luna Cult. And there’s the ongoing issue of the angel Levi in Delai who Kat still has to deal with. It’s a lot and it’s starting to pull the books apart – so threads are being snipped. Last book we saw the Luna Cult be reduced a lot and this book built on it turning it more into a personal relationship between Kat and      than making it another major plot thread; which I quite liked (not least of which because the tension between them has long since needed resolving).

This book Kat deals with Delai, setting another plot thread firmly to bed, as well as making it clear the other major plots are going to be stepping to the fore in the next book. I like it – there’s a sense of everything being handled rather than perpetuating the constant feeling of being overwhelmed

The story in Delai isn’t as action packed as the past books – and that’s ok. It lets us see another side of Kat (through her transformation) and see a different way of resolving problems beyond Kat being so super dangerous that it doesn’t matter. Again, this is something that was touched on in the last book and has been expanded upon so much here; yes Kat is dangerous – very very dangerous indeed – but being dangerous isn’t a surefire way to solve every problem. The pacing was decent, perhaps a little world building absorbed in places, but it moved pretty well. And yes, there was a much quicker way to resolve things but I like the development that came with the long way round.

Having Kat stop being a vampire was also an excellent moment to address her character and some of the problems I’ve had with her before. In the first few books of this series I complained a lot that Kat wasn’t a character – she was a walking avatar of vampiric rage. She was incapable of having a conversation, she snapped, she snarled and every action basically boiled down to “stab it until it stops moving”. She was impossible to connect to because she wasn’t a character – she was rabies in human form. It was only in the fourth book that she finally started getting a handle on her raging emotion. This book allowed us to see Kat without the vampire-berserker template AND showed us a normal, very sweet, gentle human suddenly become a vampire and becoming a frothing hunger-and-rage machine which added some excellent context to her past characterisation. No, her rage isn’t her character nor is it an asset – it’s a curse and part of the vampire condition

Which also helps makes Kat’s hatred of being a vampire much more realistic. We see a lot of vampires in this genre hate what they are and, quite often, it’s really ridiculous to see these beings moan about being immortal, beautiful and immensely powerful – oh WOE WHAT A TERRIBAD FATE! By seeing a human become a vampire, we see what they lose and the real burden of vampirism. At the same time Kat, in a human body, doesn’t forget those assets of vampirism and bemoans her sudden weakness, blunted senses and fragility; humanity isn’t all about joy, she desperately misses the strength she used to have and seems, on some level, to prefer to be a vampire.

Kat without her rage is a more interesting character without being transformed – just more revealed. She is someone who feels painfully responsible for everyone, not just her friends and loved ones but even some quite distant connections. She feels compelled to act on Delai – and not just for the vengeance before, but out of a genuine need to help Sienna and to protect future victims of Levi. She’s still very headstrong extremely determined and a risk taker – but her compassion shows more and her recklessness is just that – recklessness, courage, a need to be proactive rather than a rage driven need to KILL ALL THE THINGS!

The whole aspect has allowed a lot of character growth, I liked it.

So, a lot of positive – this has definitely been a series that validates my determination to continue with series even if I’m not enjoying them (unless complete and utter trainwreckage finally drives me away) because it can be surprising how a series can completely turn itself around. Kat has grown a lot, the world, which was always fascinating and always pulled me in, is now being explored by characters and storylines that don’t give me headaches

And the negative – we have no LGBT characters, again. POC-wise we have Dr. Lei and Keira. Collectively they may have 2 lines – they’re non-entities in this storyline. In women other than Kat we have those two (non-entities), an enemy who isn’t an enemy this book, Sienna and Sienna’s mother, Eilene. Both of whom are damsels – in fact, the whole book revolves around rescuing and protecting them.

The positive spin is that Kat is definitely toning down her jealous hatred of Keira. And in future books I think both the female villain and Keira are likely to play a greater role – that’s my hope anyway