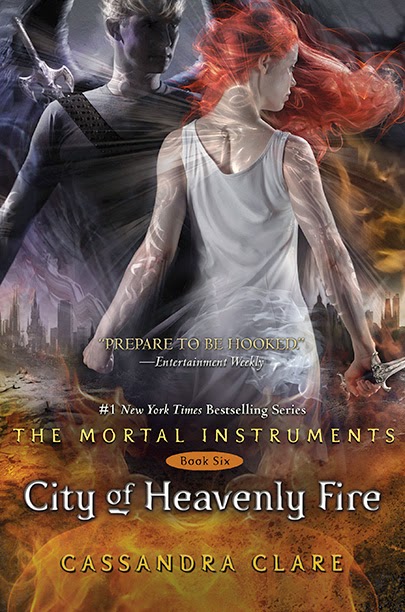 Simon, son of Valentine, is using his Infernal Cup to make war on the Shadowhunters. With this cup he can turn the Shadowhunters into the Endarkened, evil, superlative warriors bound to his will. After a raid on several institutes, he has gathered quite a force, especially with the hidden allies working on his side. The Shadowhunters are unprepared and desperately trying to counter him while continuing their mission.

And the pacts he’s made with Lillith make him almost invulnerable – except to Heavenly fire. The only source of which is currently in Jace and he doesn’t know how to control it.

Throughout the Mortal Instruments Series and, relatedly, The Infernal Devices series we’ve had a major complaint – they are terribly, ridiculously overwritten. This continues massively this book, with lots of unnecessary, excessive description over and over again. Really, we do not need to know what everyone is wearing at every given moment, repeatedly. I don’t need to know about everyone’s hair, the terrain, that someone has put their fingers through the belt loops of their jeans in conversation, what an irrelevant building looks like, whether Maryse likes said building –trim trim trim!

In between the piles of unnecessary description we also have vast lumps of navel gazing from just about every character. Lots of huge internal monologues which didn’t really add anything, especially since they’re repeated over and over. Then reinforced with a dialogue on the same subject saying the same thing which, again, may be repeated

There’s also an unnecessary amount of recapping events – something would happen, someone would react (emotion, naval gaze, monologue) then tell the WHOLE THING to someone else. Not “Clary told Jace what happened”. Nope, we’d have the whole conversation, word by word.

In addition we also have Maia’s story which is… nice, but irrelevant. Frankly, it felt like a short story slotted into the main plot because it didn’t really add anything to the over all book except more padding. In a less padded book it may have worked; but this book was already taking way too damn long to get to the story.

The same goes for the Blackthorns. They’re a nice addition to the story and would make an interesting short story of their own and are clearly being set up for another series in the same world – but because the story is already badly padded having all these inserts from Emma, the 8 squillion Blackthorn children (including detailed, repeated description of their hair colour. Honestly, I knew every single one of these kid’s hair before they ever appeared in the book – we just had an epic hair info dump) just felt like more padding before we actually got to the plot. And we had Simon and Maureen – and gods know what the point of that was.

This book is nearly 500 pages long and could have been told in 250 easily. I would actually advising skimming this book if you read it because you will miss nothing – everything is just so long winded that reading one word in three will give you a clear idea of what’s going on.

I’m also not really invested in the dialogue – that drags. We have a lot of long winded speechifying passed off as conversation and a lot of really painful, desperate attempts at wit. I did not crack a smile once (actually, I like, I did kind of giggle every time someone was referred to as the “Endarkened” but I assume that was unintentional); it wasn’t funny and it added to the word count that could already use some trimming (with a chainsaw).

Now to my next repeated irritation with this series – character foolishness. I do not understand the decisions anyone in this book makes

I do not understand why the Shadowhunters, a martial society for centuries, would respond to an attack on one of their facilities with a “first come first into battle” policy, regardless of how well trained, prepared or appropriate they are. Especially since we’ve see Shadowhunters have preferences for certain weapons (Alec likes his bow). Why would a martial society put together military units based on who yells “I CALLED IT!” first? It’s ludicrous.

I do not understand why anyone with even a modicum of intelligence would decide that the best people to send against Endarkened – Shadow Hunters who have been turned evil – would be their nearest and dearest. Is there a special kind of sadism that expects the bereaved loved ones to fight their resurrected lost family?

I do not understand why the Shadowhunters continue to discount any and all witness testimony about the Endarkened and their abilities.

I do not understand why it was necessary to use an agonisingly painful truth detector to ask 2 12 year olds what happened when they had no reason to lie.

I do not understand why, YET AGAIN, Clary, Jace et al decided to run off and save the world all on their own, taking with them the one weapon that could actually save the world with them. It was beyond arrogant and should have got them all killed.

One of the end battle plans of our merry crew includes grabbing an unknown object that does an unknown thing that hasn’t been used in possibly centuries and hoping a) it works, b) they know how to work it and c) it’s helpful. This is an actual plan they make. It works. I kind of hate that it works.

And no matter how they spin it, the Seelie Queen who cannot lie completely lied in this book.

If we manage to dig through all this the underlying plot was… actually pretty simple. The magical special people track down the bad guy and ensure their magical special ability killed him (including a biiiiig secret they kept secret right until the end because REASONS). But the underlying world is still excellent and fascinating and unique with elements I could love. The story isn’t awful and the concept and world is one of the best out there – but I hate the characters and the writing could be used to extract confessions from even the hardiest prisoner. It leaves me frustrated because I can see a lot of potential in this series and with this world – but not with characters who have set whole new records for bad decisions, writing that is positively dripping in purple and plot lines that all too often rely on deus ex, massive amounts of luck or are just thread bare.

Inclusionwise we have a bit to talk about. On the GBLT front, I think Alec and Magnus were better than what we’ve seen before (though, admittedly, because they spent so much time apart and pining for each other rather than replicating the constant problems with their relationship). Being gay was a central part of Alec’s character as it always has been (yet, at the same time, seemed to be have been brought up in a large amount of scenes – like Simon drinking blood – when it felt like a reference was pushed: it was an edge of the Lesbian Shark Trope) and Alec even called out Jace for not respecting his worry and relationship as he would anyone else’s love as well as objecting to the idea he would stay behind and wait for someone else to help Magnus. Alec was also a much more decisive and capable character in this book, rather than the weaker and rather inept and child like figure (despite being the oldest of the main characters) he was preciously. Magnus was also less of a servant though, again, that’s as much for story reasons as portrayal

In other LGBT characters we had Hannah and Aline but they’re much more background to the whole story. I suspect more of an introduction to the future series where they’re likely to be more integral.

We also had some more mention of the Shadowhunter homophobic society – this still feels a lot more show than tell to an almost ret-con degree. They mention problems people have and opinions people hold but we’ve never seen it and it almost seems to come out of nowhere; but it was remembered and there rather than turned off as it had been previously

It’s a massive step up over the past hot mess, but I do think that part of that is almost incidental to the story (Magnus not being a servant, for example, because he spent most of the book unavailable).

In terms of POC we have Maia who is a good character with an excellent story and even an excellent background that characterises a lot of how race affected her upbringing and her childhood and her relationship with Jordan – but she’s also a very incidental character as I mentioned above. Raphael seemed to have a lot more attention paid to him, fleshing him out a bit more and paying him some respect – but it was for a classic and depressing reason I can’t reveal without spoilers. So, not ideal.

Magnus got a more overt nod to his being Indonesian which was appreciated but past due. I did think that Zachariah needed a much bigger (or actual) nod to his race; especially since this has been something which Cassandra Clare has addressed very well in the past.

Clary isn’t a female character who hates all other women which is always good to see. She does make awful awful awful decisions. But so does everyone else in the book. It feels less like Spunky Agency and more like everyone in this book indulges in some very very powerful narcotics. There are a number of women in positions of authority (again, bad decisions, again, everyone makes them) and Isabelle is a pretty decent character – I already mentioned Maia.

In the end, this book improved on a few issues and I didn’t quite want to hit everyone with hammers to the same degree I have in the past. The world is strong, the concept good and the potential immense

The execution is a hot mess of bloated purple splurge. Which is a shame.