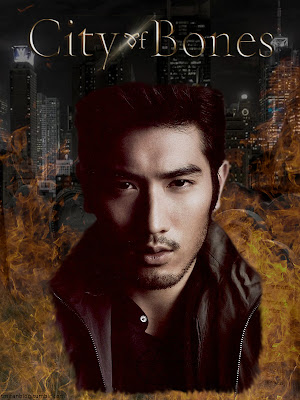 Asians are highly underrepresented in the media and speculative fiction is no different. This in part is why I was pleased to see the Asian male characters Magnus Bane and Jem Carstairs in Cassandra Clare’s Mortal Instruments series and Infernal Devices Series. The importance of this should not be minimised, though fans of the series have expressed shock that Magnus is Asian and Clare has had to be steadfast about declaring his race. I must give her kudos for her insistence because it certainly would have been easier and perhaps even more expedient to allow the whitewashing to continue unabated.

We have always said that representation isn’t enough and that for a portrayal to really work, the characters must be real and have an active part in the story. One of the things that I really liked was Jem speaking Mandarin throughout Clockwork Princess. This left the reader no ability to deny that Jem is indeed a character of colour and gave him a sense of culture, which worked to separate him from the White characters that surrounded him. Can we really say that this is enough to declare Clare’s representation of Asian men in her story as good inclusion? We already know that Asian women have to be dressed in sarees during battle to merit even a brief mention.

Let’s consider for a moment that both Jem and Magnus are biracial. When it comes to characters of colour in speculative fiction, it has become rare to find one who isn’t biracial (think Anita Blake, Mercy Thompson, Ivy from Kim Harrison's Hollows Series ) The fact that this happens at such an alarming rate simply cannot be an accident. No, rather I suggest to you that even as it serves as inclusion for many White writers, it represents a historical tendency to uplift those who are seen as closer to Whiteness. This is not to say that biracial people do not constitute people of colour but that speculative fiction has come to use biracial people as representative and in the process purposefully disconnects them from their cultures of colour. At least as far as Jem, this is something Clare has avoided by having a clear connection with Jem’s Chinese culture. The same, however, cannot be said about Magnus. Yes, Clare included obvious references to Magnus’ identity as a biracial man but it only extended to his appearance, and quite honestly, it is highly problematic to make an Asian man’s alien feature his “cat eyes.”

It is rather telling that both Jem and Magnus fit the submissive stereotype that is often associated with Asian males. We keep hearing that Magnus is a super powerful warlock, who doesn’t just give away his services and yet in both series in which he has been featured, he inevitably ends up in a servile position juxtaposed to the White characters.

“Simon rolled his eyes. “It’s a good thing we know the person who’s dating Magnus Bane,” he said. “Otherwise, I get the feeling we’d all just lie around all the time wondering what the hell to do next. Or trying to raise the money to hire him by selling lemonade or something.”
Alec looked merely irritated by this comment. “The only way you could raise enough money to hire Magnus by selling lemonade is if you put meth in it.”

So, Magnus is invaluable to them but by virtue of being a warlock, he will always be seen as an outsider. This of course fails to explore the reality that racial tension would most certainly enter the relationship. The Shadowhunters literally prey upon Magnus’ feelings for Alex and not only is this predatory, it reveals a strong sense of entitlement. It’s never about what is in the best interest of Magnus Bane.

In Clockwork Princess, Magnus declares that he has never been thanked by a Shadowhunter before, which, in actuality, is a small recompense for aid he rendered them for free and having to tolerate Charlotte ordering him around like he was her servant. In fact, the servants are treated better. Even the cook, who insisted on singing the most inappropriate, morose songs didn’t get spoken to in the same tone. We are given next to no reason for Magnus’ investment in Will Herondale. This is further problematised by the fact that Magnus twice marginalised because he is a bisexual Asian man who is positioned as a servant  to the largely straight and uniformly White characters.

In the Mortal Instruments Series, Magnus is one of two characters of colour. He begins his interactions with the shadowhunters when they crash one of his parties. Considering that he is supposedly one of the most powerful Downworlders, you would think that they might be even be somewhat hesitant of infringing upon his space, but alas, that is not the case.  He is paired up with the manchild Alec, and spends his time serving the shadowhunters and pulling their arrogant behinds out of the fire without pay, though he constantly says he needs to be paid.

“You never called me back," he said. "I called you so many times and you never called me back."
Magnus looked at Alec as if he'd lost his mind. "Your city is under attack," he said. "The wards have been broken, and the streets are full of demons. And you want to know why I haven't called you?"
Alec set his jaw in a stubborn line. "I want to know why you haven't called me back."
Magnus threw his hands up in the air in a gesture of utter exasperation. Alec noted with interest that when he did it, a few sparks escaped from his fingertips, like fireflies escaping from a jar. "You're an idiot."
"Is that why you haven't called me? Because I'm an idiot?"
"No." Magnus strode toward him. "I didn't call you because I'm tired of you only wanting me around when you need something. I'm tired of watching you be in love with someone else - someone, incidentally, who will never love you back. Not the way I do."
"You love me?"
"You stupid Nephilim," Magnus said patiently. "Why else am I here? Why else would I have spent the past few weeks patching up all your moronic friends every time they got hurt? And getting you out of every ridiculous situation you found yourself in? Not to mention helping you win a battle against Valentine. And all completely free of charge!”

Not only does he fail to receive remuneration, Magnus risks his life in battle for a group that has historically viewed him as “other.” Magnus is literally the magical person of colour and he gets zero respect from the shadowhunters and is instead expected to continual perform on demand. He is absolutely passive and submissive. In every way fulfills the stereotype of the so-called “good” East Asian, the meek, servile, accommodating, model minority.

Like Magnus, Jem fits the role of the model minority because he is meek and self-effacing. He is unfailingly polite in the face of all provocation,  spends his time acting as Will’s conscience and shows endless patience for Will’s antisocial behavior. This is, again, a stereotypical wise minority role. In fact I am surprised that his nickname is Jem rather than Confucius. The only time Jem is actually assertive is when it deals with his medical care. He is also second to Will in terms of love, though Tessa claims to love them equally. Jem is clearly her fallback position, as she spends much time commenting on Will’s blue eyes and dark as well as reminiscing about a kiss they shared. If Tessa truly loved Jem so deeply, would she have been so willing to practically have sex on his grave?

Despite both being Asian, Jem and Magnus have decidedly western names; in 3 books there is only one passing reference to Jem having a Chinese name, Jian, in the first book that is never mentioned again. Especially with Magnus it works to create an unnecessary separation from their culture. Magnus Bane and James Carstairs hardly works to identify them as Asian people. Yes it’s a small quibble however when we consider that in speculative fiction many characters of colour have names which have no bearing on their race or ethnicity it is yet another failing on the part of Clare to have fully realised characters. In fact, for as long as we have known Magnus he has been immersed in the western world and western culture to the point that it has completely supplanted his culture of origin. He is singularly alone even when he lives in modern NYC which most certainly at the very least has a significant mundane Asian population.

So not only are the characters of Jem and Magnus problematic in their representation, at least in the case of Jem, exist as the sole representation of a character of colour. Both men have been feminised in that Jem, though justified by illness, is always framed as delicate and Magnus through his over the top camp presentation fits into the binary homophobic stereotype. Neither of the two men exist with the same physical strength of many of the White male characters. For many of the positive decisions Clare made in creating these characters there are just as many problematic elements. It would be nice to be able to cheer the inclusion of Asian males simply because it is a rarity in speculative fiction, let alone the mainstream media, but representation as we know is not enough and even with the positive, we have to criticise the negative.
Posted by Sparky at 9:23 AM