The Four Realms by Adrian Faulkner 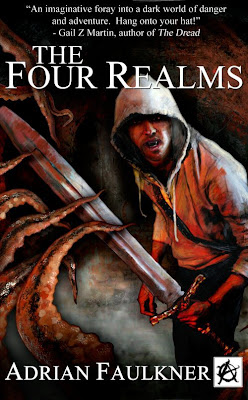 Ernest, an old wizard, dies in mysterious circumstances. And no-one seems to care, certainly none of the wizards – except Maureen. An 82 year old woman who has long been a gatekeeper for the wizards, she’s determined that her long term companion’s death won’t be ignored and brushed aside and, stifling worries about her future as her waystation becomes less and less used, she sets off into Vanefasia to find answers. Who killed Ernest, what was he involved in and why doesn’t the Abbot care.

Darwin is a half-vampire and is struggling to live a life without killing with his friend Cassidy. It’s not going well to say the least – and doesn’t get easier when they find Ernest’s notebook. A discovery that leads forces to almost annihilate vampire kind. Darwin sees this as a final chance to gain acceptance among the vampires who have so shunned him, a chance to be their saviour, to rally the broken survivors and restore their culture and people. But it’s never that easy – and Mr. West still wants the book

And there’s Mr. West arriving on Earth because his people need a new homeland and, as part of that, he needs Ernest’s notebook. But in trying to learn more, Mr. West is exposed to the chaotic ways of human thought with heresies like “choice” and “probabilities” and soon finds himself using… unorthodox methods.

There is a lot here. In fact, even for a world building fan like me, I think I have to say there’s too much there. And that is a leap for me – I love huge worlds, I love a vast diversity of monsters and creatures. I love all the world’s mythologies together. I love to have different realms and dimensions each with their own rules and denizens and realities. I love this huge mix of vast numbers of creatures.

There are limits though. And once you get to a score of obscure, single mention monsters, leprechauns, gnomes, elves, dwarfs, angels, werewolves, hell realms, magic realms, wizards, vampires and then throw in aliens as well – and you do all of that in the first book? It’s almost too much, certainly to digest at once.

But I think a lot of this is down to personal taste of how the story was written. This book had 2 protagonists Maureen and Darwin. They’re not major powers. They’re not movers and shakers. They’re not really concerned with the wider world or politics or the fate of nations. They don’t care what’s at stake, the bigger picture is not only hidden from them but it’s also something they’re not particularly interested in. They’re both involved in very very personal stories with very personal goals. To me this can get frustrating because the world is so huge – and there are major important things happening in that world that the protagonists just don’t care about. Part of me is frustrated to be so on the periphery of such major happenings, to be only getting part of the story and to be only seeing this vast amazing world through the lenses of relatively insular people. It’s like taking a tour through a vast, beautiful landscape, and spending the whole time reading a book and only occasionally glancing up – the book is good, excellent in fact – but look at the landscape!

The personal stories are very good, though, extremely realistic and impactful. Darwin’s desperate need for acceptance among the vampires is really well portrayed, him being torn between Cassidy’s morality and what he feels a vampire should  be. There’s a lot of complexity – like him blaming Cassidy for his own failures to not be a “perfect” vampire, perhaps even his own conscience that rebels at what he feels a vampire should be. There’s his reverence for vampire culture and history which the other vampires don’t even share, an attempt to put the lost vampires on a pedestal to make them this glowing thing he wants to be part of. And his idealised version of what vampire society is like which even the other vampires are clear doesn’t really exist and they’re not remotely interested in joining. Despite numerous set-backs he constantly tries to do that one more thing that will make them accept him, let him into the fold even though it’s obvious that he will never be considered one of them.

Maureen has a similar complex story. Her determination to find out what happened to Ernest, the man she loved, when the wizards seem to be doing nothing (and even if they were doing something they wouldn’t tell her because her relationship is secret) is really well done, her motivation learn and believable. Alongside that we have her worries about being pointless, about not having a future any more because she’s old and in many ways how it doesn’t matter if she takes a risk because she has nothing further to live for. Despite this almost fatalistic feeling that her future wouldn’t be worth living she also worries about the future, what will happen to her; she may feel her future may be pointless but she also frets about how she will survive and get by as a woman in her 80s with no home. Then there’s her finding herself as effective in the magical realm, being able to do something, being active and powerful which is so unlike the life she normally lives, conflicted with the idea that, in the face of such massive happenings, what can an old woman actually do? It goes on to cover a lot of the issues faced with the elderly – trying to get by on their own, maintaining independence when sometimes needing help. Being patronised and having people force their way into her life in the name of help, not being taken seriously and not being considered capable or sensible.

They’re both very real characters with some very believable, solid issues and I like them a lot. It’s just with such vastness happening around them, the very real, very important, tangible personal issues of Darwin and Maureen seem insular. It’s a matter of taste more than anything.

Mr. West is also a fascinating character with how he develops – starting from studying humanity, to imitating them for greater understanding, to steadily challenging the orthodoxy of his people to eventually transforming entirely how he thinks making him alien to his people – and almost addicted to the new thought patterns he adopted. I loved this excellent depiction of culture shock while at the same time giving an insight into the truly, well, alien culture of the aliens as well as their needs and motives without clumsy info dumping

It’s characteristic of the world building in this story – there’s clearly a lot there and there’s obviously a lot of dept. The world building we see explains a lot about the past of the various facions – the vampires, the church history of the wizards, the elf vs dwarf war, the aliens without actually resorting to much in the way of info dumping. Information is presented in an appropriate and balanced manner, not just handed out in convoluted monologues and more is alluded to than is actually shown while still conveying the full message. It’s really well written and presented allowing the pacing to keep going forward at a decent rate. The writing is also extremely evocative and has some excellent imagery. Darwin’s struggle with his blood lust and conflict about his dual nature is powerfully presented without it being overly whiny or annoying (yes he is whining but we understand why he is and the natural feel of it). Maureen’s difficulties and conflicts are really well written, again showing her problems and issues without sinking into angst.

Where the book falls down is on inclusion, even with the rare and interesting character of Maureen an elderly woman. Darwin has no sexual attraction at all to men or women – but still uses sex with men to kill men for blood – we have far too many memes of gay sex as predatory for this not to be seen as problematic. The other gay character in the book is a camp elven prostitute who is also a spy – who is intimidated into giving up his employer by Maureen glaring at him. He is a full checklist of stereotypes and is repeatedly referred to by anti-gay slurs. In fact, the book as a lot of anti-gay slurs that rubbed against my nerves reading it.

The POC are similarly troublesome to say the least. We have Nanny Voodoo (yes. Nanny Voodoo. The name alone tells you no good will follow) who acted as Darwin’s nanny when he was a child (even the vampires got themselves a Black nanny). Darwin talks up her power – but we don’t see any of it. There’s also Tom – Tom the centuries old Black servant who is treated as – and acts like – a servant to the rest of the vampires.

Those vampires are Nazis, by the way. Organised and created by Hitler who then fled when Hitler turned on them leaving the leaders with Nazi “sensibilities”. Still, their death and the survivors having nothing to do with the philosophy helps – but there isn’t much challenge or revulsion directed at them (in fact, these are the people Darwin was seeking approval from).

We do have some interesting female characters with Maureen – and potentially interesting with Cassidy but so far she has acted as little more than a servant and helper for Darwin. Throughout the book she takes moments of grief from him as he lashes out at her, blaming her for his human sensibilities. I thought we had a sexist magic system, for reasons unknown only men could use magic. This is usually something that annoys me, by creating a fictional “biological necessity” for sexism (or other ism) the characters claim not to be prejudiced – they’re just reacting to the world that makes certain people inherently inferior! But that world is created by the author and they’re responsible for deciding it needs to back a prejudice. However, this is being questioned in this book – I’m not sure how much it’s being challenged; whether we have a one off of a woman using magic or whether we may be on the path of women exposing the misogyny of a male establishment that has lied to disguise their prejudice. There’s a lot of potential with both characters but it’s something that needs developing further.

It’s always a shame when a book I really enjoy has these little bombs of fail in the middle of it – because it’s so unnecessary and it would be such an excellent read without them.

This book was huge – truly, immensely huge. It has a huge world, it has a huge story, is has a huge cast of characters, it has huge issues. We didn’t embrace the hugeness with this first instalment – and yes, I want more and part of my disappointment is not getting more – but despite that it also doesn’t forget the people in the hugeness. In this vast vast vast world with a storyline clearly touching on epic forces, we’re not losing sight of the actual people that drive it who, consequently, are very strong, very grounded, very real and very human characters. It also gives us chance to digest the hugeness of the world without being overwhelmed. An excellent start to a series and a very good book as well.