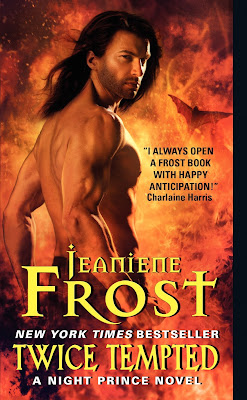 So she leaves before getting any more hurt.

And then someone tries to kill her.

Presumed dead, she needs to find out who tried to kill her, who is hunting her and stop them to protect herself and her family. But she also needs to know why. Is it her enemy? Is it Vlad’s? Or is it… Vlad himself, motivated by his overwhelming pride and unwilling to swallow the insult of her leaving? Which leaves her with terrible choices of who to trust.

I was impressed almost from the beginning by the writing of this book. After all, this isn’t just the second book of a series, this is a book that rests on the Night Huntress series of world building. The temptation to infodump is very very high. But it’s not only masterfully resisted – but the world is wonderfully presented. Little side references like Leila being careful not to fry the shower, her immunity to fire and how that relates to Vlad’s power, her thinking back to the last time she was kidnapped – it all serves extremely well to fill in the past story without us ever once having an info dump or a convoluted moment or a great, big, clunky “as you know… let me explain the plot to you”. The past is explained – but it’s a reminder for a reader who hasn’t read for a while, not an attempt to re-tell the whole book.

And the story itself flows well. It’s wonderfully focused on just one storyline, side issues crop up now and then to each side, there are issues and distractions, but they’re brief and more re-direct the main story than they mini storylines in their own right. The protagonists act in a sensible and realistic fashion, there’s a lot of real emotion, a lot of realness and lot of believability. And not once did I want to lay about the characters with a large haddock for their sheer foolishness.  Everything’s just so well balanced – enough mystery to intrigue, but not so much that it’s lost and hopeless. Enough questions to stop it being linear without becoming distracted. Enough action to be exciting without it being a slog of battles and enough capability from Leila for her to seem competent and strong without her seeming ridiculously perfect and overpowered. All the conflicts were real, both against the enemy and Leila and Vlad’s emotional conflicts, nothing seemed convoluted, nothing seem contrived. It all worked

I’m also impressed that, while cameos from the other books appear, Jeaniene Frost has resisted the urge to play with her old characters. They make brief visits, they don’t hang around, they don’t dominate the plot, they don’t try to become protagonists or major characters; she’s teilling Leila and Vlad’s story, not Cat and Bone’s story nor Mencheres’s story.

I said before that Vlad is something of a MagnificentBastard and he continues in much the same line. He walks very close to the edge of being a complete arsehole and often engages in the kind of alpha male behaviour that I’ve come to know and loathe.

Vlad is incredibly arrogant and controlling – we’re talking choosing her wardrobe when it suits him, keeping secrets which directly concern her, expecting her to fit in with his agenda and plans and, of course, assumes that his vengeance against the one who hurt them is far far more important than hers (despite it being her friends who are dead and all). He does a lot of the classic “protective” behaviour - he tries to forbid her from doing things he thinks will put her in danger, insists she takes a bodyguard etc. She never actually outright locks her up despite him repeatedly threatening too., the flip side is, when he threatens to, she backs down and either goes behind his back or negotiates. Yes she is in danger and is actively under attack, but she’s also a grown woman capable of assessing her own risks.  And we have the classic “romantic” moment where he tells her he once said he’d let her go but now it has changed because twu lub. Honestly, I don’t really get the whole “I will never ever let you go, will stalk, imprison and hold you forever and ever even if you want to leave” as a romantic gesture. A lot of this also has a nasty shade of woo-woo explanation because he’s a powerful vampire and a prince and has super jealousy, super protective woo-woo powers that make it ok, honest. There’s also a moment I find particularly annoying where he tells her he doesn’t love the real him if she doesn’t accept his commitment phobia – yes there’s loving someone warts and all, but loving someone even with their flaws doesn’t mean not expecting them to work on their flaws or excuse their bad habits especially if they hurt their partner. Similarly, his need to be seen as respected and unchallenged is used to force her to acquiesce and apologise to him through gritted teeth.

But, despite that, this romance is still vastly better than many in the genre. Vlad reads minds, Lia takes steps to stop him. Vlad tries to put her in a protective bubble, she refuses (albeit through negotiation rather than rejecting his control). His behaviour, expecting her to keep safe when he never would have in the same situation, is openly labelled as chauvinist. She does demand a hand in her own revenge. Most stunning of all, she leaves him. Yes, she leaves him because she sits down, analyses their relationship, talks to Vlad and realises she’s not going to get what she wants from him. He won’t admit to loving her, won’t even admit to being open to the possibility and she’s never going to get the relationship she wants and needs. So, rather than moping around declaiming “woe is me” as so many have before her – she leaves. Yes she loves him and yes she has the super-duper lust for him but she has the sense to know when it’s not going anywhere and doesn’t consider the relationship back on until he realises his love. Yes dramas often drag out a relationship – but this wasn’t a misunderstanding or a huff or a “I have to make you hate me so you will be safe” or ”I hurt you so I’m going to disappear and reduce you to a zombie-like state” any of the other convoluted crap we constantly get – she looked at the relationship, clear eyed, and realised she wasn’t going to get what she needed to be happy – so left.

We have other fun poking moments, like Cat pulling back Vlad’s words about how overprotective he is being of Leila. And though Leila was kidnapped AGAIN, she not only rescued herself quite handily but happily lampooned the whole process; when told not to scream she rolls her eyes “what is this, amateur day?” Yup, she’s an experienced kidnap victim. And she calls Vlad on the carpet about his “my way or the highway” habits. I also like that daddy’s blessing is not only not sought but his outright hostility to their relationship is not considered a major block by Vlad or Leila. And we had Leila in a kiss with a man who stopped it because he realised she was crying and vulnerable and it would be taking advantage of her, which was nice to see.

I don’t object to the fact that Vlad is portrayed as brutal, vicious, ruthless and evil when it comes to his enemies. He is, after all, Vlad the Impaler, he is a figure who fought his enemies with overwhelming terror and brutality to try and overturn their greater forces and numbers. We’ve also seen, as I mentioned in the first book, that vampire society is brutal and harsh. I do not expect or even want Vlad to be a fluffy bunny. I’m not going to criticise his use of torture or killing people because he’s a vampire and it’s never treated as something endearing, fun, good or forgettable so much as it is an inherent and awful part of vampire life.

Inclusionwise – well, a relatively large number of characters and, if anything, even less inclusion than was minimally included in the first book, given what happens to the POC in the book (1 Black man who I won’t spoil but it’s not good and Mencheres who only shows up when Vlad needs something).   And, again, no GBLT characters. The protagonist is apparently one quarter Cherokee. Did you know that, because I didn’t? And to only hear about that in the last quarter of the second book is dubious. One good point is she openly lampoons the idea that she has woo-woo because of Native American heritage but fully expects other people to believe such bullshit.

There is some wonderful commentary about class – including things like Dawn’s resorting to petty thievery is a requirement for her to eat and that the warrants against her are unjust, Leila’s own career path considering what professions were cut off from here and feeling like she had little choice.

In all this is a good book. It’s a good book that gets a lot right – and it’s a good book that I happily read in one day without stopping. I won’t say it’s one of my all time favourites, there’s a lot of shiny but not a lot of sparkling, it’s fun but not riveting, it’ll never bore you but it’ll never put you on the edge of your seat either. But few books do – and being fun, a great read with some interesting characters- it’s worth reading, it’s worth buying.