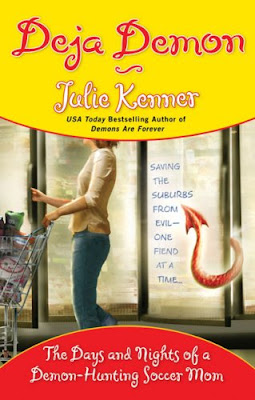 Kate has some more demon trouble – and this one may be the big one. Demons are accosting her from all sides, determined to stop her using the Sword of Heaven. If only she knew what that was, where it was and what she was actually supposed to use it for.

Then there’s the problem of David – or Eric, her long dead husband who is now alive again in the body of David. Who has actually come back to life twice thanks to her intervention – an intervention which she fears may have blackened her soul meddling with dark arts. Beyond worries of the state of her soul, there’s the problem of Allie, their daughter and David’s wish to be part of her life – and her desire to see him. To say nothing of Kate’s own troublesome attraction for him.

And, as ever, there’s the taxing problem of trying to fight the demons without drawing attention from her husband, Stuart and still supporting his political campaign. A deception that becomes more and more difficult as the lies and evasions build up and Stuart becomes more aware of a problem in their relationship.

Then there’s the Easter party which she somehow got roped into organising.

I’m torn on this series. I feel like they’re constantly on the edge of the abyss. The thing is, the core of this series is the unusual protagonist. She’s a demon hunter and she’s a soccer mom! She has to balance her mundane life of shopping, PTAs and child care in between hunting down the evil denizens of hell and stopping their dastardly schemes. This is unique, it’s very rare to see this kind of character – a woman out of her 20s, a woman with young children and a nuclear family, in Urban Fantasy as the protagonist. And the juxtaposition of her mundane problems against the demons is great fun in a jarring way

But, having a unique protagonist isn’t sufficient to base an entire series on without a strong plot and without a strong meta plot. Which I don’t think the Demon Hunting Soccer-Mom series actually has. New demons arrive every week, they do their evil woo-woo, they get vanquished. Every week there’s a new plot, and it’s a good plot – it’s usually well written, it’s interesting with several twists. It had a great sense of epic, a nice amount of character building and a great look into the background of Kate being raised in the Curia. It had no plot holes, it ran on sensibly and was pretty fun to read.

And was pretty much resolved by the end of the book, not leaving any real meta to hang on to. The new book will start pretty much afresh as far as antagonists are concerned.

Hence the brink. Without an overarching storyline for these books, I end each one with a feeling of “they need something to link the story together, something to keep it going or this series will crash and burn.” Why hasn’t it fallen over the brink already? Because it’s been kept going by Kate’s personal issues and conflicts as more and more of her family discover her past and her activities and then she deals with the fallout of that – as well as the huge issue of Eric coming back from the dead as David. Her family issues have kept a new twist on the monster of the week, the meta has been not how the monsters change, but how her family has evolved.

But there’s a limited shelf life to that – conflicts with enemies can be repeated and prolonged near indefinitely. Conflicts with family and loved ones that are endlessly dramatically repeated can get old and tired (if nothing else because, in the end, you’re left wondering why the relationship is maintained). Now that pretty much everyone has learned the big bad secret (and, really “someone else has learned my secret!” was at risk of becoming overused anyway) we really Are at the brink this time. Of course, there are still family dramas to resolve – oh boy are they – but I don’t know if they will carry my interest on their own.

Still the family conflicts are fascinating and really well done. In many ways I loved the reassertion of Stuart in this book – with David/Eric back and known to his daughter as well, it seemed like Kate was being drawn very much away from the often absent Stuart. I love the new complexity of the dynamic, of Kate recognising the love she has for both of them but also how she has moved on with her life and built a new family. Everything out in the open not only created a lot of interesting dynamics (including Stuart leaving with the baby, which I know many people would frown on him for – but how many parents would do the same thing? How many demons have attacked Kate at her home?) with Stuart constantly questioning what role of a parent he has towards Allie, with Kate wanting him to be more. And then there’s David pushing to Allie, understandably, but in doing so undermining (and challenging) Kate and Kate establishing boundaries and compromises on that front. Then there’s David and her attraction and old love there and establishing a professional boundary in the face of a lot of temptation – and David’s pushing. Then there’s Allie and her pushing more and more to become a hunter and how that is changing her as a person, including leaving behind so many of the things that used to be so important to her – the things that were important to a “normal” teenaged girl who didn’t have her rose tinted glasses removed. This is something we have seen in other series from the girls’ pov as the protagonist – but it’s interesting to see the different slant from the mother’s viewpoint.

There’s a lot of excellent family dynamics, relationships and developments there that add up to make not just the characters very real and very human but also to make the relationships between them seem extremely natural and normal. I enjoyed reading them, I think they really added a lot of context and flavour to the book, the setting and those elements that do make Demon Hunting Soccer Mom a truly unique book in the series.

The story itself was pretty good – we had some past world building exploration and a really nice development of a the “epicness” of the foe. It did feel like it would be a big bad, in fact the big bad was so raised up I was astonished by the ending for being a resolve – the well maintained sense of drama was sufficient foreshadowing for an even bigger bad. Sure it was a little corny that the demons all growled the plot at Kate and if they’d just kept their mouths shut she wouldn’t have got involved, but over the top cheesy threats are pretty par the course. I think the book has also hit the appropriate balance between Kate’s mundane life and the action – not allowing her day by day activities fade into nothingness, but not making them great big humping roadblocks to the plot either.

When it comes to minorities, however, we have the straightest, whitest southern California you can imagine. We’re 4 books in now and the absence is glaring.

Ultimately, while there is action in this book, this is a story – and a series – that rests more on character interaction than it does on actual things happening. It’s less a focus on the various demons Kate fights and more how she deals with her family, her friend Laura, the community around her with its expectations, the people from her past and her husband’s political ambitions. This means it’s probably going to be a book that is rated very differently depending on your particular taste. For me, I come down on the side of liking it, but not loving it. While the issues are important and fleshed out and interesting, too much of the family issues are represented by long internal monologues and fretting and there could do to be more structure around it to keep the story going strong.