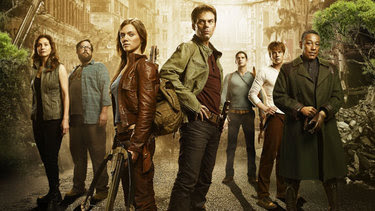 It’s been a long hiatus, but Revolution is back with us after a game changer of a last episode.

With the pendant, Monroe has managed to put a helicopter gunship in the air and it’s hovering and pointing it’s great big guns at our heroes. They run and it chases them, firing and missing (but always being dramatically close, of course). The team run into a roadside diner which the gunship promptly blows up with rockets.

Drama! Oh no all our heroes are dead.

Spare me cliffhangers that rely on me actually believing the death of the protagonists.  The team is alive (you’re shocked to hear this, I know!) having made it to the walk-in fridge (possibly by teleportation given how little time they had). Miles tells them they need to leave and get as far away from Philadelphia as they can before they come looking for the bodies.

In Philadelphia, Monroe looks dramatically out the window when Neville tells him no bodies were found, they consider the possibility of them being blown to itty bitty pieces but decide that, Miles being Miles, they’re probably still alive. While he’s not best pleased with Neville, he has power! He plans to wipe out the rebels, attack Georgia, the Plains Nation and then California. And he wants to kill Miles. No more reunions.

Charlie and Nora are driving a wagon out of Philadelphia, pretending to be transporting corpses form the morgue. But there are checkpoints with the city on lock down and even Charlie flashing her militia brand won’t get them by without being searched. He opens one of the coffins – inside which is a ripe corpse.

Once clear everyone’s let out for happy, huggy reunions and Nora kissing Miles in a way that is far more than friendly. But when walking Aaron and Charlie both think Rachel owes them an explanation for the pendants, her still being alive and, basically, everything. Until the helicopter flies over which is rather distracting. It flies over them heading to Westchester – where a rebel camp is located. It kills everyone inside.

The gang arrive at the base and find everyone wiped out. Charlie can’t believe it and Miles comments that this is what used to look like, before the blackout. Uh-huh, and the legions of people firing guns at each other we’ve seen already didn’t look like this? Nora decides she has to go to central rebel command in Minneapolis to warn them and Charlie and Danny decide to go as well because… just because. Aaron puts in that he wants to go home. They found Danny, did what they came for.

Rachel tells Aaron, everyone, that Monroe will find them, they can’t just go home he will be looking for them. And as for leaving the Monroe republic, she’s given him the amplifier, he has helicopters, he can take over everything. Her counter plan is getting the rebels missile launchers. Yes it takes power – so let’s get some.

She mentions going to see a friend and colleague (who may or may not have electricity) and Miles has an alpha “I will come and protect you! Rawr” which she treats with perfect gentle mockery.  Rachel and Nathan go, leaving Danny, Charlie, Nora and Aaron behind. We also get a flashback of before the Blackout and a very young Danny going in for surgery that’s a last ditch attempt to heal him after all else has failed (something that has been alluded to before).

Neville and Nate look at the destroyed Rebel base and Nate is saddened by the slaughter, mentioning the families who were caught in it. Neville blames it on the dead, saying they were hiding behind women and children. Nate backs down – and Neville goes to question a teenaged survivor while Nate looks on in horror.

Nora, Aaron, Charlie and Danny arrive at the rebel camp, Nora greeting Nicholas who she knows and Commander Ramsay, big boss man. The rebellion is being wiped out. Commander Ramsay thinks they’re done – until Nora raises the hope of Miles Matheson (I think there needs to be a fanfare there).

Miles and Rahcel on the road have to have a big emotional conversation – she’s trying to be business like and he is all “I thought you were dead” spilling his unrequited love everywhere and blaming himself for leaving – which he would never have done if he thought she was alive – the militia and pretty much everything. She’s moved but tells him to step back and gets back on the cart, not answering any of his questions.

Nate and Neville spy on the rebel camp through binoculars, Nate seeing children and – Charlie. Neville’s very happy and wants to call in the air strike. Nate refuses, says there’s too many people. Neville focuses on Charlie and says, in misogynistic terms, that she has a hold on Nate. He hits Nate and calls him a shameful disappointment – and Nate bulrushes him. they fight and Neville wins – and tells Nate never to come home.

Rachel and Miles arrive at her colleague’s house, John. He tells her that everyone, including Grace, has gone silent. She warns him that Monroe has an amplifier – from her – and she needs his help to fix it. He leads them into his basement, which has a pendant hanging from the ceiling, electricity to work a light – and a whole lot of deadly, modern weaponry.

Charlie runs into the beat up Nate who reveals to her his real name, Jason, his relationship to Neville, the fact Neville’s calling an airstrike and everything. He says he has nowhere to go and he’s done with the militia. Charlie takes the warning but isn’t quick to trust him and won’t take him back (ah, she can learn).

But at John’s with all his shiny weapons, things don’t go well as he reveals that Randal (ominous mysterious figure from the DoD) got to Grace – and to him. He uses one of his shiny weapons to knock them out.

Speaking of Randal, we catch up with him and his room full of electronic shinies – which he is getting Grace to fix. He tells Grace he has to leave for a while, leaving her with Austin, an obvious guard who she calls an animal. Randal tells her to fix the elevators – he wants to get to level 12…

At the camp Commander Ramsay talks about making their stand since they’ll never evacuate the wounded in time. Nicholas is uncertain but Nora is confident Miles will bring the rockets and, if not, they’ll use the guns they have. There follows an “America RAWR” speech. He asks for volunteers for the first line of defence and, of course, Charlie, Danny and Nora volunteer.

Back to miles and Rachel – tied to a chair and John has already called Randal. She begs him to let them go but he’s afraid of Randal who he calls unbalanced – and adds that he’s already “in the tower”.  But Miles manages to break his bonds and knock John out – they grab the weapons and leave.

At Monroe headquarters, Neville reports that he saw Charlie and the base and Monroe orders the air strike. He also tells Monroe that his Jason/Nate is dead.

At the rebel camp, Charlie has another flashback of Daniel as an asthmatic child and looking out for him, before looking at him checking weapons. She goes to Danny and demands he sit it out and hide inside, playing the “I walked a thousand miles to find you” card. But Danny says it’s not her job to look out for him, he has to go it.

Which is when the helicopters arrive. Everyone to the barricades and the ominous stand off begins. Firefights ensue, with wounded and fallen on both sides. The rebels start losing and running out of ammo – when Miles and Rachel arrive with the Big Guns. Charlie points out which helicopter has the amplifier on it and Miles, the Big Damn Hero, shoulders a launcher and moves out.

But the helicopter he’s not watching fires a rocket near him, knocking him flying. While Charlie and Nora clear the ringing in his ears, Danny leaps forwards and grabs the launcher and fires it – destroying the helicopter (how easy is it to use a rocket launcher for an amateur anyway) in  big dramatic explosion. The other helicopter, without the amplifier, begins crashing, spraying bullets – which hit Danny.

The helicopter crashes and Danny collapses, a line of wounds across his body – Rachel, Miles and Charlie run forwards as the sad music plays, desperately applying first aid.

We skip to Rachel and Charlie sat together. Rachel says she should never have let them come here and fight. She cries, and blames herself for letting Danny out of her site. Through it, Charlie remains deadpan and says there’s nothing Rachel could have done. All they can do is finish what Danny started – going after Monroe and helping the rebels.

Monroe looks rather… worn, but gets a visitor who energises him. Randal – who drove there, showing he has power, joined by John. They’re there to help.

Rachel mourns at Danny’s body then, crying, starts cutting into him. She opens a wound and pulls out a small cylinder – with a flashing blue light on it.

I like some of the interesting challenges we have here – like the whole “hiding behind women and children” that we often see in real life peddled as an excuse for slaughters – never considering that maybe the people are just living with their families – and do you expect them to spend their lives separate in case they’re ambushed? And that’s aside from the sheer disparate power levels.

I’m still not entirely sold on everyone being so horrified by the carnage a helicopter can inflict – since we’ve already seen all but full scale battles (and even some full scale ones) with snipers and people with guns and bodies piled up quite handily. I think Miles alone has killed more people in the episodes we’ve seen than that helicopter has.

The rebels may, however, like to investigate the whole idea of secret bases for a guerrilla movement. The fact the Monroe republic knows where they are to be wiped out suggests they’re not that good at it. Especially when we consider that, before the hiatus, merely having a US flag got people shot.

There’s a lot of curious plots here though – mainly in the hands of Rachel and Randal, I don’t know what the next step is since the whole first half of the season – getting power and finding Danny has been resolved in a way.