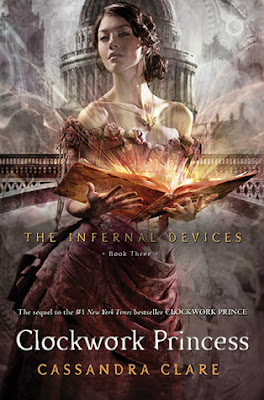 Tess is still agonising over her choice to marry Jem – while deeply in love with him, she cannot forget Will, nor can Will who is torn between his love for Tessa and his great loyalty for his friend, brother and companion.

And Mortmain isn’t going to leave them alone to deal with their angst – his plan to horde all of London’s supply of yin fen the only drug that can keep Jem alive has finally hit them, especially since Jem has been taking extra, shortening his life so he can be more fully around and active for Tessa. His life span is measured in weeks, no longer in years.

And then there’s Mortmain’s attempts to claim Tessa and his final revelation of his grand master plan against the Shadow Hunters once and for all. A plan that is only harder to thwart with the head of the Clave gunning for Charlotte, stooping to any means he can to find sufficient excuse to remove her as head of the London Institute and deny her any help in facing this threat.

The main problem I have with this book is the same problem I have with the whole series – it’s slow. The actual plot of this book doesn’t kick in until we’re 30% in; before that we’re mired in love triangle angst that basically runs round and round in circles as Will, Jem and Tessa circle each other with their angst and love and worry. We have Jem’s shortage of yin fen but no-one really does anything about it accept continue to circle round and round and worry and angst and worry some more.

The story does pick up at 30% but it’s still less of a plot and more of a desperate flail, which always frustrates me, especially since it’s a theme in this series and leaves me having problem rooting for characters that, ultimately, flail their way to a solution. They knew yin fen was being bought up, but only now considered it an issue. Will goes riding off to Wales without any real plan, Charlotte and co follow with no real plan, Tessa hangs around being helpless and desperate with no real plan (which is past annoying now –she’s supposed to be training how to fight so can she actually do that occasionally – and not insist on attending emergencies in her wedding dress!), everyone kind of flails around, hoping their mere presence will somehow fix everything. I know, to a degree we’re looking at people in situations where they have few options, but this turn up and hope approach to a story doesn’t engage me – especially when the situation is resolved almost by Tessa pulling out a new super-power.

There are a number of side plots or tangential plots in this book – and one I really like; Charlotte and the Consul. It’s nicely done, it’s directly connected to the main plot line it adds considerable characterisation, world building and wider explanation of both Shadowhunter society as well as what is actually happening in the plot and support from the wider Shadowhunter forces as well as having an excellent portrayal of both sexism and having it challenged.

There’s the good one. Then we have the Lightwoods because… because... I have no damn clue. Why are these characters even here? Why am I supposed to care? Why did we have a completely unnecessary diversion to kill their wormy father when it added nothing to the book? Why did I have to spend so much time in the head of Gabriel Lightwood a character I managed to care even less about than I do will and Tessa – and I was on the side of the WORM when it had a chance to eat Will and Tessa. Why is this character even here? And Gideon? Oh Gideon, how little I care about your mountains of scones and flailing attempt to court Sophie. Then there’s Cicely. Dear gods, I can’t believe there’s a single person in the entire world who cares about Cicely. Why is she there?! She’s even less pointful than the unnecessarily returning Jessamine who shows up because we simply do not have enough pointlessness in this book! And not only there, but why am I wasting time not only reading about Cecily, but being stuck in her head so we can see fragments of a pointless relationship between 2 pointless side characters? To give us a pointless PSA about choice and autonomy vs having a future chosen for you? And what does that have to do with the price of tea in China? A nice message but pretty irrelevant to the central themes of the book and certainly not needing a passel of pointless characters bloating the cast for the purpose.

And why does every single one of these characters have to be paired up with their eternal HEA before they are 21? All the pairings were lining up so sickeningly perfectly that I kind of wanted to see Sophie be killed by the Mortal Cup just so everything wouldn’t be so ridiculously neat.

Which is another things – this many characters, a grand, epic confrontation and an end of a series and you couldn’t kill off at least ONE of the extras? The Lightwoods were begging to be ganked! Or the damn singing cook, all she does is sing – she had disposable extra written all over her! Instead we had a group of untrained kids and mortals manage to hold off a horde of automatons, the same creatures that slaughter the Clave’s higher council.

I have to praise Cassandra Clare for the incredible amount of research she has done for this book. Every street, every inn they stay in, every house they visit. They’re all very true to what they really were at the time, there’s a massive amount of historical accuracy and detail in every step of travel, in every location in this book. Unfortunately, it’s too much. I have huge amounts of respect for an author who does the research, but equally huge disinclination to read a Victorian sat-nav read out directions. It’s a classic example of less is more – there really is no need for us to know every straight name, every route, every road taken and it adds to the over-written nature of, I say again, a rather overwritten book.

Which brings us to the literary quotes. Yes, you are a clever clogs and have read the Big Impressive Literature, well done, I applaud the author’s familiarity of Classical Works That English Teachers Force us To Read. But this could all be noted in a little self-congratulatory foreword and not be allowed to spill all over the book, cluttering various pages with odd, unnecessary quotations and literary references that add very little to the story except to remind me how very very very very very much I loathe Tale of Two Cities.

I’ve always had an issue with how Magnus has been treated, both in this series and in the Mortal Instruments series. He is a pet, a servant, someone who is continually called upon to provide magical help, even risking his life for the Shadowhunters, but never really having a compelling reason to do so. The Shadowhunters as a whole carry a vast amount of contempt for warlocks like Magnus – something we’ve seen repeatedly in both series, and no-one in this book – or any book in the Infernal Devices, has approached Magnus unless they’ve wanted something. In this book Magnus even acts as a helper to henry, is ordered around by Charlotte and acts as a front line fighter without anyone acknowledging that he owes them nothing.

Why does Magnus do this? He has no common cause with the Shadowhunters. Unrequited crush on Will? Pity? Whatever unfathomable motive Magnus has to continually crawl after Shadowhunters, it’s extremely problematic to have the GBLT representation in this book be held by a bisexual man who lives to serve the straight characters and his lover, Woolsey, who doesn’t bother with that love stuff and is only into sex.

We do have some interesting POC – not only Magnus but also Jem. Jem has always been clearly understood as being half-Chinese and I have to take a moment to praise Cassandra Clare for vehemently rejecting any whitewashing of Magnus or Jem in fandom. In this book we have a far greater emphasis of Jem’s heritage; he speaks in mandarin, he has items from his life in Shanghai and he explains the importance of them, he talks about the stories his mother told him and the instruments she played. There’s a concerted effort to make Jem’s Chinese heritage more than just a label, just as Will and Cicely speaking in Welsh adds a depth to their nationality beyond a mere descriptor.

This is something we really value in books and media in general, because it’s common for history, culture and other indicators of being a minority to be erased when including POC – or any minority – and it becomes often a once mentioned descriptor. Obviously, not every person who is a minority has a different culture, history etc, by any stretch, but it is nice to see as part of inclusion when it is so relatively rare (or when it appears only as blatant stereotype).

Jem is also an interesting disabled character – he takes his medicine and has obvious problems but he is still a capable fighter and doesn’t want people to fuss over him or treat him differently. One thing that is interesting is how everyone respects his decisions, even life and death decisions, over his health and no-one feels like they can countermand his will even though they dearly want to. He is given agency in his own treatment and his own choices.

In all, I love the shadowhunter world and think it has vast potential which really isn’t realised. I also think that, as a Steampunk, it really lacks the sense of time and place that I so cherish in a good steampunk. Short of the odd turn of phrase and the insistence of calling everyone by their second names, I often forget that this is supposed to be set in the past. The aesthetic, the setting, the whole brass, class, steam and etiquette that so characterises steampunk is missing.

On top of that, I really don’t like the main characters – Will is overdramatic, rather self-centred and angst laden, Tessa is overdramatic, angst laden and rather dull and the whole cast together would be hard pressed to muster enough brain cells to even find one of those interminably quoted books in the library, let alone read it. I don’t mind Jem and I quite like Sophie; Henry and Charlotte could, potentially, be interesting. But Will and Tessa? Ugh, no, angsty, self-absorbed, whiny, melodramatic, not too bright, pretentious, literary quoting banes of my existence! I don’t know what annoys me more, Will’s attempts at wit and maudlin over his curse or Tessa’s ridiculous “spare them and show you have the moral highground” as some kind of ludicrous and completely reality-denying method of trying to talk the bad guy round, coupled with the terribad burden of having 2 men love and adore her for no apparent reason.

Add in a very over-written, distracted writing style that really needs cutting down and this book is a real miss for me.