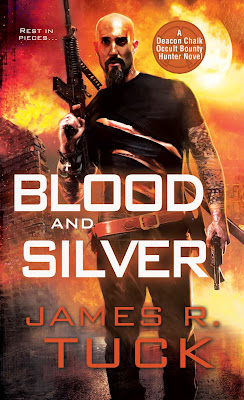 Deacon Chalk can’t enjoy a good day – something bad always happens that he can’t ignore. This time it was a man beating a dog. But when he intervened he found that the man was no man – and the dog no simple dog either. He quickly becomes the rescuer of a lycanthrope and facing off against an entire pack of predatory shapeshifters

But more, he has stepped into a civil war – between predatory shapeshifters who wish to dominate, kill and control prey species as they always have – and those who are seeking for a more egalitarian co-existence. This, combined with Charlotte’s involvement and the fact the predators are just bad guys Deacon Chalk doesn’t want in his city is reason enough for him to get involved.

But things are not that simple – and whatever the mission of the peaceful weres is, they’re clearly more than they seem and perhaps more than Deacon Chalk can tolerate. Especially since he’s putting his friends, his people at risk for someone else’s war.

This book is one of those that vindicates my habit of not giving up on a series just because the first book (or the first several books) didn’t work for me.

It’s not that this book is radically different from the first book – it isn’t. Much of the style remains the same – so it’s still very much a male power fantasy, it’s still a book of getting the girl, saving he innocent and running around in a big car with a big gun and blowing stuff up and beating stuff up and cutting stuff up while the character equally gets mauled himself in a big, dramatic, gorefest action-movie style romp.

It’s not sophisticated, it’s not subtle and it’s not going to engage too many brain cells – but that doesn’t mean it can’t be immense fun! There’s a weredinosaur for crying out loud! A weredinosaur! Your arguments are invalid!

What has happened is that a lot of the irritants that were in book 1 have been toned down a lot. They’re still there, but in a much much much less annoying fashion. So is it still long winded? Yes, but it’s not nearly as repetitive – we get the long spiel about his guns, once. Not four or five times. And the spiel’s not as long. He waxes lyrically about how amazing his car is – but he doesn’t do it every few pages. We hear what music he’s listening to, but we don’t get treated to the Deacon Chalk guide to all things musical. This helps, this helps so much that I don’t have feel like I have to skim past endless pointless irrelevancies to try and drag the actual story out from the fluff

We also don’t have Deacon Chalk being fawned over by a vast crowd of adoring fans (especially women) who play groupie to let us know just how amazing Chalk is. We know he’s done some good stuff, we know he’s helped people, but it’s toned down on the flock of fanpoodles. This could be because, with Tiff, we now have an established love interest and the flock of adoring women wouldn’t work as well.

I also haven’t been bolding his name and going with the movie voice over because, while it still has that over-the-top-gritty-blood-and-guts feel it’s no longer so ridiculous and mockable with it. It really is quite a turn around. It’s not flawless, it really isn’t – all of these are still issues, and Deacon Chalk is one of the most blatant Gary Stus in the genre, but they are manageable not book breaking now. They’ve been smoothed out and much more refined. The pacing is literally a thousand times better.

This allows the good parts of the story to shine through more – the action and very well written fight scenes are fun, gory, gruesome brain fluff. The staggering warrior, taking punches and injuries but staggering through to fight on against all the odds, is a classic big Damn Bad Arse Hero. He’s also grim and gritty and dark – his attitude and ultimate resolution of Marco is beyond morally questionable and pretty damn evil – but you can see it in the circumstances – and far be it from me to cry any tears for Marco. His characterisation of his worry for his people, his connection to them, his growing feelings for Tiff, his connection with Charlotte and his memories of his dead family, how he deals with that, his grief and his fight not to succumb to it are all quite well done character elements, all of which I liked. What I liked less was Deacon Frost’s developing Angel powers as it’s quite a power leap and I’m wondering if this is setting the tone for the series. Are we going to see him develop new super powers like this?

The world is rich and extremely diverse with all legends abounding. This book focuses on the shapeshifters and every kind of shapeshifter and were imaginable, different variations on lycanthropy, we have weregorillas, weresharks, stagshifters, wererabbits. Yes, werebunnies. WEREBUNNIES! Menacing military werebunnies!

I like the culture they built with the shapeshifters –the prey vs predator, the abuses of the predators and the new order proposed by Marco – but at the same time not letting it become a simple good vs evil story, there’s some nuance there.

When it comes to portrayal of women there’s a mixed bag. So many of the women are placed as people to protect: Sophia is a damsel all through, even though she can handle herself, Tiff is sheltered a lot by Deacon Chalk and Kat becomes a hostage. Catherine is the noted exception – but having a bunch of white woman who need protecting and a black woman who doesn’t isn’t exactly positive. We also have a female villain motivated by sexual jealousy and I really wish that Frost had stopped calling Tiff “Little Girl” when their relationship turned sexual.

On the plus side, Tiff can handle herself and when it’s revealed that one of the “good guys” has been using his woo-woo to force a woman to sleep with him, that is outright called rape, unequivocally called rape and people line up to tear strips off the man for it.

The treatment of POC is far far worse. I spend the whole book clinging to Charlotte who, though not entirely unproblematic as mentioned above, is capable, strong, loyal, brave and caring and clearly deeply valued by Deacon Frost.

I cling to her because every other POC is evil, weak, often dirty, a rapist, an abuser, a child abuser, a meth addict who sells her child for abuse – really. The selection of evil, nasty and downright awful POC in this book is incredible – many of the evil predatory, raping, child eating predator lycanthropes are POC (contrast with only Charlotte on the good guy side). And the “good” POC are either an abusive racist and a coward or a jealous, conniving fiend who set the whole evil plot in motion. We even have a cameo in the beginning of the book of a black “crackwhore” who sells her daughter for crack; serving absolutely zero purpose to the plot. It’s fraught, it’s awful and it needs to end – the inclusion of Charlotte does not justify this many POC villains and fiends.

Also, the POC in this book need to stop reading like the dessert menu. Caramel, chocolate, mocha, cocoa, bitter chocolate, dark chocolate, deep chocolate – honestly was the author hungry when writing this book?

Surprisingly, we do have a gay character. Now, he’s only revealed as such in the epilogue – it’s literally a foot note at the end of the book – but through the book he has been capable, loyal, strong, assertive and devoid of stereotypes. He has always been there and given the situation it wasn’t too unrealistic to have him being gay not come up before it did. I was impressed – and will be more so if he appears in the next book and it isn’t just a tacked on line in the closing pages of the book.

I also like Larson, he’s disabled and in a wheel chair after the last book and is adapting with difficulties. There is a lot of the frustration of someone who is newly disabled there, someone getting used to the chair than magically adapting. But he is finding his own strength, he is learning magic even though Frost disapproves and his chair has holsters for knives and guns – he is taken to combat situations, he is expected to fight, he does fight. He is their medical support as well. He’s never talked down to, never considered weaker and isn’t spared Deacon Chalk’s intimidation just because he’s in a chair.

This is a book I can happily sit down with, turn off my upper brain functions and just enjoy the wild ride. It is leaps and strides ahead of the last book and James R Tuck has really found his stride and his style and managed to sand off some of the rough edges that made book 1 such a laughable drag. Yes, it’s still an uncomplicated, violence-ridden male power fantasy – but it reads as an uncomplicated violence-ridden male power fantasy written by an adult rather than a teenager now. I’m left with a book that certainly has its issues – it does – and it will never be the most nuanced or complex of reads, but is now something I don’t actually mind reading. I look to reading book 3 with a curious anticipation, if not massive excitement rather than the very guarded reservation I had beginning book 2.

I’m almost disappointed. I was all prepared to let loose with 2 loaded barrels of snark and it’s not snarkilicious.