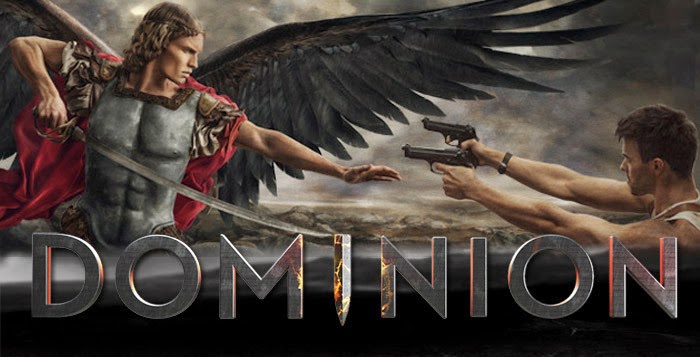 Flashback opener! To a young Alex and his now dead father, Jeep (are we really going with that as a name? Jeep? Was his brother Humvee and his sister Land Rover?) being all bondy when creepy skitter angels attack (8-Balls I guess. And they do a really good job with that creepy skitter crawl). Jeep looks all badass while the camera focuses on his improbably beautiful blue/green eyes (yes, I’m shallow, sue me). Alex runs inside to get a gun while Jeep continues to badass slaughter everything (we also learn 8 Balls can imitate voices). It ends with a super angsty “I’ll never leave you”.

Which of course he did so it’s to adult Alex, Jeep’s funeral and a metrick fuckton of angst. And they can’t even have a funeral ceremony without mentioning the chosen one. This sends Alex into even more angst, trying to rub off his tattoos and generally being sad.

The council of senators/consuls/it seems to change meets to discuss getting the power back on since half their defences are down without the main reactor. Whele’s little stunt with the 8-Ball has also kind of backfired, no-one’s impressed. Whele tries to spin it, not very successfully unfortunately, General Riesen is too damn noble and speaks up in Whele’s defence.

When they’re alone there seems to be some pragmatism to his decision – he’s not impressed by Whele but Whele pretty much keeps the whole city running. To more business – they fear religious fervour caused by the Chosen One so want to take steps to stop the news getting out. These steps include rounding up everyone who was there to see it and feeding them to Whele’s pet lion.

Alex decides to see Clare in the middle of the night, while drunk which is definitely questioned by Noma (a fellow soldier and his friend) who promptly puts him in an arm lock before Clare oks it. He wants to run off, Clare thinks everything is wonderful because he’s the Chosen One and can save them all. Yeah, Alex isn’t actually that much of a fan of saving Vega – a city that abandoned him to become a low class V1 when his dad left. And, no, he didn’t become a soldier out of any lofty ambition to protect the city as Clare thinks, he became a soldier so he could eat.

He calls her a spoiled princess, she throws back ugly drunk. I think the former is more powerful. She kicks him out.

Over to the bad guys – Gabriel is having a huge party with all his angels doing their own funeral thing which involves preserving the dead in goo. He’s distracted by something so leaves the 8-Balls to enjoy their bodies – and have an orgy. That distraction if Michael deploying the Archangel signal. Gabriel and Michael talk, basically expositioning the motives: Gabriel thinks god ran off because Earth was a failure and he didn’t want to destroy it himself while Michael thinks Gabriel is jealous that god loved mankind more than angels. Gabriel rants on about how terribad humanity is and maybe daddy will come back when they’re gone. Yes, this show needs more daddy issues. Gabriel also drops the knowledge that he knows about the Chosen One

The Helena embassy is all in prison and Arika is getting blamed for it all because she had sex with Whele. Vega has humiliated the women by taking their Hykas – long robes they wear.

Arika is taken to be questioned by Whele, wearing only her underwear, where they discuss how she, in his eyes, seduced and murdered a Delphi politician (they have oil in Delphi) and how he impressed he was by it. Arika again protests their innocence and adds that Evelyn, Queen of Helena, worships the divine female so would never side with Gabriel who is male but Helena also won’t go to war against Gabriel unless he attacks them. Evelyn’s also not going to hand over her planes in exchange for Arika – but she will bomb Vega if they do (Helena has the only airforce left).

Back in the cells, the Helena contingent scrapes their nails on the floor to remove their poison nail polish. The women think Arika will use it to kill Whele.

Starving Waif Bixby is now semi-adopted by Clare, but she’s shooed away so Clare can ask her dad why she was the last person to know about being married off to William Whele. He says she wouldn’t have agreed… um, that’s kind of the core of her objection? They also argue about the unjust V system and his belief it’s all supposed to be temporary and they’re going to become a republic. One day. Honest.

He also intends Clare to replace him (despite her not wanting to) and warns here about Whele – so presumably the marriage is to placate him. She storms off when he reveals he knows she loves Alex, and has little faith in the Chosen One – and he seems to have heart trouble.

Consul Rebecca visits and confirms it, adding that he can trust Clare with the truth. Riesen actually wants this marriage because he think he may die any day – which apparently makes sense to him. He also leaves the city every few weeks for reasons unknown which he won’t share.

Alex sulks around being pouty, though Noma assures him she’ll keep secret about his relationship with Clare. He’s also being assigned to House Whele. He tries to dodge Michael – but Michael insists on talking, dragging Alex to his little tower. Michael is ominous while Alex points out that Michael spent his whole life lying to Alex and being a bit of an arsehole – also his tattoos totally warned him against “those closest to him” so, buh-bye Mikey.

He has a point but he’s sooooo whiiiny.

Alex goes to house Whele and Whele infodumps some backstory about being a televangelist before the war (the war kind of ruined that profession) and how he’s very aware of how powerful – and dangerous – faith can be. Alex is fine for dodging all this faith stuff – which would be easier if William Whele didn’t genuflect.

Alex and William go walkabout and William is, unlike his father, probably a really nice guy (and the populace like him because he hands out extra rations when they call for his blessing. It’d be nice if they could get medical supplies without having to creep to the Principe, though)

Alex runs into a woman in the Whele corridors and exposes his wrist tattoo. Bad luck for him, she’s an infiltrating angel, one of those new, human-looking ones.

Riesen meets with Michael who is all vague about the prophecy and is worried he can’t reach Alex (because he’s really really tried sooo hard, with that flogging and everything). He asks Riesen for parental advice – Risen at least has the good sense to realise he’s a useless parent incapable of giving advice.

Alex and Clare make up, he agrees to stay in Vega and she acknowledges that she kind of is a spoiled princess. Make up sex follows after which she examines his tattoos while he pouts about burning them off. After which (and a brief reunion with Starving Waif), the angel catches up with him.

They fight, she uses her razor wings to take out the extra but contents herself with punching Alex and throwing him into a wall. Clare and Bixby hear danger, so naturally comes to check it out in their gowns and get injured (not seriously, plot armour). More fighting (why did this angel pause to open lift doors so they can fall down a lift shaft rather than, y’know, stabbing him?). he manages to set her on fire with a gas line and kick her out a window, she flies off since all kinds of alarms are sounding.

To Arika and Whele – Arika used the poison to slaughter her own handmaids. She then presents Whele with a choice – he can absolve Arika, let her go and they’ll say the handmaids were naughty, bad traitors.  Or she will say he killed them (or he can kill her) and start an all out war in which Vega will be destroyed.

Alex takes his angst to the next, predictable, level. Clare and Bixby are hurt! It’s all his fault! He must leave Vega for their sake (and not because it’s something he’s always wanted to do, not at all)! Oh woe Clare, no you can’t go with him because ANGST and DANGER and he cannot live with himself if she died, woe woe, we’ve seen this same plot line 8 gazillion times before.

He leaves the city and his tattoos start moving and itching. Ah, probably went to a dodgy tattoo parlour. The angel he burned returns to Gabriel to confirm the whole Chosen One thing.

And we find out why Riesen leaves the city at night – he visits a lover he’s got stashed in a derelict casino. She’s an 8-Ball.

Alex – less moping. I’m not saying his moping is unreasonable because he has plenty of good reason to mope. That’s the problem. He has far too many reasons to mope. The writers have decided to replace characterisation and development by just dumping angst and daddy issues. Abandonned by his dad, his dad is dead, Michael is a cold and even cruel guardian, the terrible class issues of Vega, the star-cross lovers, reluctant Chosen One, putting his loved ones in danger – it’s too much! In two episodes there’s been enough angst dumped on this protagonist that even Supernatural writers would call foul.

And Riesen… doesn’t make any sense to me. I’m not even talking about the bizarre affair with an 8-Ball. He clearly realises that Whele is a problem, he warns his daughter about him so it’s not a case of denial. And he acknowledges that Whele has far too much power as well. But he takes no moves to actually reduce that power – quite the opposite, he defends Whele and arranges his daughter’s marriage to Whele’s son. He wants a republic and he fears Whele while, at the same time, funnelling more and more power into Whele’s hands. It doesn’t make sense.

Inclusionwise things aren’t getting better either. Clare is more of an asset than an active force. Noma is still very background. Arika is the only active female character (and WOC and LGBT person), but manipulative sexuality is a big part of her character which is both a gender and sexuality trope. I want to see more where this goes and how Helena is revealed and what their culture is

We also have a sex scene with naked woman and keep-it-above-the-waist man.

We have some POC evil angels and the actor who plays Michael is part Japanese. Angelic poc would be interesting if it wasn’t a) othering and b) the angels are evil (or, at least, cruel).