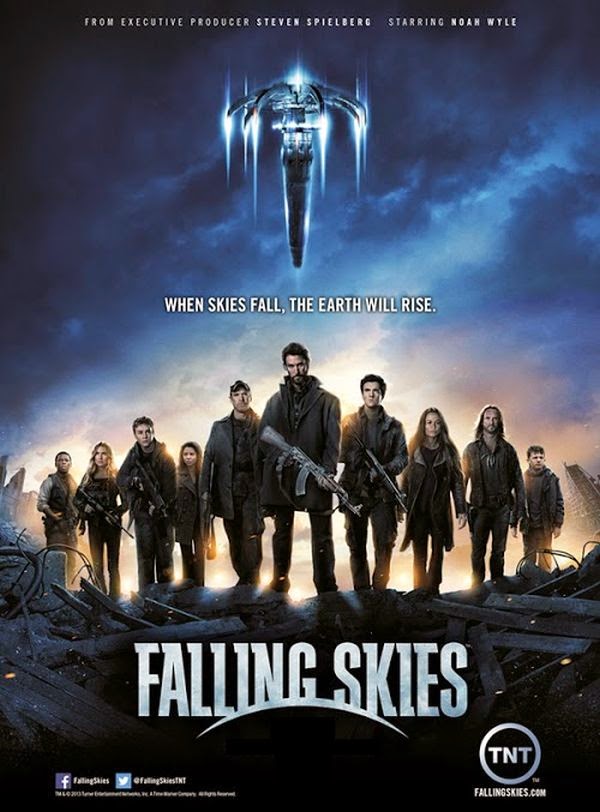 Alien babies and endless bad decisions – where will Falling Skies take us this season?

The whole gang are travelling and have been for 20 days and there’s apparently a rift between Hal and Maggie after Maggie executed Karen (Maggie being odd though, not Hal). Everyone’s all happy and light hearted as they return “home” – to Charleston.

Which is all shattered when creepy Lexie declares “you don’t all have to die here” and Espheni ships fly in. they drop pylons that form walls of light to stop their retreat – and mega-mechs move in. They fight, the Volm weapons giving them some advantages, but several are killed, others wounded and many separated by the fighting and the fence pylons.

Several people are captured, including Tom and Weaver (apparently some time passes – Tom spends it writing political speeches on the walls of his cell, of course). Weaver thinks the Volm abandoned them. Weaver also talks about not letting “those things” get you

Those things may be a new type of alien under Espheni control – ugly flying things like big green wasps. They’re in a new giant ship

Those who aren’t captured struggle among the ruins surrounded by the light fence, with the buzzy aliens occasionally dropping in to grab someone. Hal and Tector work together among the ruins, dodging the Skitter patrols and trying to break the light fence with electricity. It doesn’t work.

Outside the fence, Anne has taken command of a group of soldiers and is pushing them hard, something Anthony tries to get her to loosen up on. They also drop some exposition because of this show’s habit of leaping months forwards at a time. The Volm have, apparently, left (probably sick of the humans constantly seeing them as the enemy despite doing so much to help humanity) and Anne is driven to find her daughter.

They are doing some damage hitting supply lines and Deni brings her news of a new target. Which they hit – and Anne is awesome and badass.  But the truck isn’t full of ammo – it’s full of children, packed in and cowering. None of them are harnessed; after getting them to safety, Anne decides to go wherever they were going in the hope of finding Lexie.

Ben wakes up from a coma, he’s with Maggie and Lourdes (who managed to keep him alive). They’re in Chinatown and, for some reason, it’s an Oasis. People are behaving as if there is no war and, for some reason, the Espheni leave it alone despite wiping out or capturing humanity everywhere else, this is safe. He’s taken to Lexie – who is now an adult (and blonde). Everyone’s all wearing these little 3-circle necklaces that feels vaguely cult-like; it means “unity” for “all three of us.” Everyone is all blissed out and safe in their hippy commune, though Ben is having problems, fading out – which Lexie puts down to him being unwell (I put it down to resisting brain woo-woo).

Ben asks Maggie where their guns are but Lexie says if they pick up guns, so do the Espheni. Yes, Maggie seems to have bought into Lexie’s little cult as well. She shows them a mech that had found the place – which was magically struck by lightning and shut down. It’s now some kind of shrine (these people managed to find a candle warehouse or something because they have candles EVERYWHERE). Lexie summons lightning now?

Back in the ruins, the Espheni apparently drop food (the humans scramble and fight over it). And Tom isn’t confined to his cell, though he hides his face when out to hide the fact. Pope is still awful and apparently tires to hoard food while blaming Tom randomly because he’s Pope and SHOULD BE DEAD ALREADY. He’s stopped by the disguised Tom with a flame thrower.

In his cell, among his speeches is actually a map of the fenced ruin and notes of the patrols. When Weaver seems to be losing his stability (he’s really on the edge) Tom promises to get them out – he calls the fenced ruin a ghetto. He also notes how different the Espheni are – they wanted to destroy humanity now they’re keeping them in ghettoes and even keeping major enemies like Tom and Weaver alive – and without eye-worm mind control.

Cut from that to a load of kids watching Espheni propaganda about a New Coalition under Espheni control (which is always wonderful) and isn’t it all peaceful and wonderful (except those icky rebels who should be stopped for bringing conflict to the beautiful Espheni vision. Of course the youth should report them). The whole thing may as well have had “Hitler Youth” plastered all over everything, even the uniforms are similar. Even the Team Leader looks like someone asks central casting to find them the most Aryan guy possible. It’s not even slightly subtle. Matt is one of the “students” in this indoctrination school. When one girl tries to speak against the lies everyone blows whistles at her and convince her she will believe everything soon once all the brain washing kicks in.. The Team Leader is upset that Matt isn’t keeping her in line.

Just in case we’ve missed all the VERY NOT SUBTLE references, Matt tells the arguing girl, Mira, all about the Nazis and their re-education camps (it’s like someone wrote this episode and someone else came in and said “wait, do you think modern audiences will get this? They’re awfully ignorant – better throw in some exposition”). But he does run his own little resistance group.

Which brings us neatly back to the ghetto where Tector notes that there are no children in the ghetto at all. Pope is still evil and hording. They want his generator to help them try and break down the fence. Hal and Pope fight, which doesn’t really go well for Hal. They do come to the attention of Digaan Botha who has escaped from many of the ghettoes before

Disguised Rebel Leader Tom manages to get to the fence again where he meets Cochise, the Volm. He explains that the Volm had to move all of their forces from Earth because the Espheni found where the Volm hid their families. Protecting Volm families takes precedence over liberating Earth. There are few Volm left on Earth and the Espheni are constructing something vague and ominous. He also says there are many ghettoes world wide.

Tom has become such a legend that the people of the Ghetto have taken to putting up pictures of his disguise – calling him Ghost. Which annoys the Espheni – they want him handed over or extermination will follow.

I’m not following this. Tom has lampshaded how the very mission of the Espheni has changed completely – but so far I see no reason why the Espheni would go from wanting to kill all of humanity to wanting to keep them in ghettoes and imprison such major enemies like Tom. Especially since they’re not using harnesses and eye worms to control their prisoners and they’re not making any apparent use of them. And why brain wash the kids rather than harness them? So now we don’t have mind controlled people – we have collaborators

I would like to say it could be a fascinating new twist in the story, but it also could be different writers playing a kind of retcon (getting rid of the Volm and the mind control abilities of the Espheni and take the show in a new direction). It all feels a little hand-wavey. Like the writers wanted to do something and didn’t really care if it fit what had happened before. Especially since we have new show runners.

The premise could be interesting, but if you have an interesting premise, start a new show. Don’t take an old one, force it into the mould and then hack off any bits that don’t fit. And now Lexie has serious woo-woo? Not sci-fi, this screams fantasy.

Also, I get that any totalitarian, genocidal society heavy on propaganda is going to have strong parallels to Nazi Germany. But this doesn’t just have parallels, they even use the word “ghetto” and their New Coalition kids could be the Hitler Youth. This is treading heavily on the line between parallels or evoking Nazi Germany and appropriating that horror.