Teen Wolf, Season 4, Episode 1: The Dark of the Moon 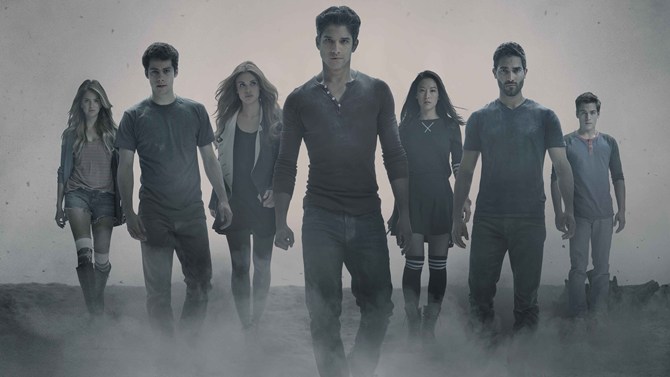 Is it just me, or is this show back on the air awfully quickly? Season 3 only ended at the end of March. Not that I’m complaining, of course.

Stiles and Lydia are in Mexico (I think it’s Mexico – it looks very very stereotypically Mexico) apparently pursuing  a plan Lydia considers suicidal. They go to a party – a very crowded party – that requires a card with a skull on it to get in. They’re given free drinks but Lydia drops a bullet casing with the same skull carving into hers

It gets them into a meeting with Araya, the hunter who lurked around the edges of last season not doing an awful lot. Lydia and stiles think the hunters have kidnapped Derek and they’ve brought $50,000 for his released. She mocks the for coming alone – and out in the party we see Malia and Kira and Scott (Stiles dramatically says they brought and Alpha, personally I think Kira is more intimidating but they all get to do their shiny eye glow). Kira also fails at blending in and fails far far more at dancing. Malia helps by pulling her close which also adds some suggestiveness to their dancing.

It also goes on for way too damn long. C’mon Teen Wolf start of a new season, we need plot, not dancing.

So back to Araya who expositions on the Dark of the Moon being a time for grief and reflection (does this mean something or was it shoe horned in for the sake of a nifty title?), when Scott takes down one of the guard and Stiles removes $10,000 from their offer. Two goons attack Malia and Kira and they’re taken down very quickly. Scott takes out another (leaving an indent in the wall)

The hunters, the Calaveras, respond by gassing the whole place with wolfsbain, rendering Malia and Scott helpless. Araya mocks their inexperience but in the confrontation, Scott realises Araya also doesn’t know where Derek is. She tases him

Flashback! Scott tells Lydia and Stiles about Derek’s disappearance and that he found the Calaveras’ bullet casings in his loft. Using her banshee abilities, Lydia confirms he’s not dead – but she’s not sure if he’s alive. Which is helpful. Zombie wolf? Vampire Derek?

Back to the present to Scott waking up in a bathroom, locked in with Malia, Stiles and Kira and discovering that Araya has taken Lydia. Malia is bemused why they would find Lydia (she’s quite happy to say, as a coyote, she would have no problem leaving the weak or injured for dead – or cannibalism for that matter. Stiles points out this is actually progress with Malia.)

Araya’s all curious about banshee powers, mainly so she can be super duper creepy and then ask questions about Scott. Which means more tasing Scott and chaining him up and lots of electroshock in a rather convoluted fashion to make Scott tell them where Derek is. Yes, he doesn’t know so Araya keeps asking leading questions about shepshifters, people who could have been turned they didn’t know about – maybe not by a bite. The electroshocks trigger memory (Alpha memory?) and Scott remembers Kate Argent asking if she could be turned by a scratch – and yes, she was clawed.

I have to say this is one of the most inefficient information retrieval systems ever. I mean, if you’d talked him through it and dispensed with the whole electroshock thing you probably would have reached the same answer.

Of course, being Alpha, Scott also breaks his chains before revealing Kate Argent. Quick flash to her where she has imprisoned Derek wrapped in vines.

Araya lets them go – she’d already sent 4 men to where she thought Kate had been seen. Yes, Araya ALREADY FREAKING KNEW ABOUT KATE! We had that whole scene just so Scott could remember for himself? She wants them to go see if they can do better than her missing Calaveras hunters. She adds that she will hunt Scott when he turns someone

She sends a guide with them, Braeden. On the drive, Scott and Stiles do a quick recap and exposition of who Kate Argent is. The Calaveras checked to make sure that Kate wasn’t changing since she died by the Alpha claws and checked the body. Seeing her growing claws they swapped the bodies and took her somewhere so Kate could commit suicide like a good hunter (not bothering to tell Chris Argent, apparently. Because REASONS) since the Calaveras are REALLY inflexible when it comes to the hunters code. Kate decided she wants to live and is happy for lots of Calaveras to die to make that happen. She’s also got glowy green eyes.

Blue is grief, yellow is normal werewolf, red is alpha. What’s green? As they know from the Kanima, just because you’re bitten by a werewolf doesn’t mean you become one. Car trouble means Scott and Braeden have to go off alone (After a reminder that Kira is Scott’s love interest)

The car trouble turns out to be a giant bone claw jammed into the engine.

Braeden and Scott arrive at a town that was levelled in an earthquake, except the church which survived because, according to local legend, it was built on top of an Aztec temple dedicated to the Nahual. Werejaguars. Braeden has been paid (she is a mercenary) to bring Kate back to the Calaveras and, no, she won’t lose any sleep over what they do to Kate.

As night comes on, Stiles tries to fix a jeep and using Kira’s improvised torch, Malia sees something move. She goes on the attack. Kira follows, Stiles tries to but Lydia, who always has excellent sense, tells him to fix the jeep. Malia retreats when she gets clawed – by something big and fast that smells of death

They return to the car and drive off, Stiles angry at Malia for running off, he thought she was leaving. She says she’ll never leave without him (as if that’s obvious). She’d leave Kira and Lydia of course.

Braeden and Scott go under the church, following Derek’s scent (and talking about Scott and Kira. Really? In what possible universe is Braeden even slightly interested in Scott’s love life?) – and lots of ominous things move just out of the corner of their eye. Something advances on them but it’s hard to see in the dark, Braeden shoots it several times. Scott scares it off with an epic Alpha roar. It also breaks down a wall to reveal an Aztec symbol of Tezcatlipoca, the Aztech Jaguar god (well, he’s a bit more than a Jaguar got). Hearing Derek behind it, Scott smashes the symbol. We only see Derek’s hand – whatever else is there causes Scott to gasp in surprise.

They carry him out to the Jeep – they have Derek. If Derek was 10 years younger.

This episode felt padded and unnecessary. The dance, going to the Calaveras at all, the weirdly awkward way you have to get into their dance club. The unnecessary and convoluted lets-trigger-your-memories-by-Saw-style-games and then everyone forgiving and making up? Was there a point to this? Padding padding padding – and really shouldn’t be happening in the first episode of the season.

Was this whole set up a really daft way to bring Braeden back? They couldn’t have had her just show up investigating Kate as they were? It’s not like Braeden just showing up isn’t already a thing.

Malia amuses me though. She has immense comic potential.