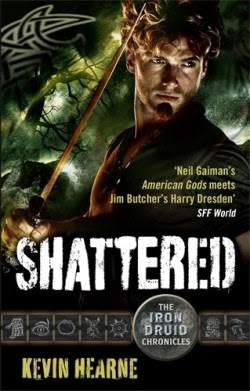 Atticus has brought his old Archdruid to the 21st century. Owen faces a near impossible task – adapting to the last 2,000 years of history, not least of which the various shenanigans his apprentice has got up to (and, perhaps, questioning his own teaching style with him, looking at what Atticus as become).

Granuaile is clear of Owen – but Laksha calls for help. Granuaile’s father is in India on an archaeological dig and has been possessed by a very dangerous, worrisome creature. With Atticus busy, new druid Granuaile is ready and able to set off and handle this herself.

While Atticus, in between helping Owen, is still facing Ragnarok and Loki’s ongoing plotting. He has the support of a number of deities from different pantheons, but he needs to know what help they can give, what is motivating them and, basically, what is going on and what his next move should be. He’d also quite like to know which of the Tuatha de Danann is trying to kill him – that would be helpful, but he ends up uncovering something far larger than expected

Set the Fanpoodles to drool!

Honestly, I’ve started writing the review 3 or 4 times because I didn’t even know where to start. There was so much I loved so I’m just going to throw gushing praise at a page.

I loved the three characters with the different voices. Atticus, Granuaile and Owen all have their own separate but connected storylines and they all sound very different. Atticus’s style is something I always love – his age peaking through his general fun and light hearted exterior. Granuaile has a much more formal, even poetic way of thinking and speaking and I think it still resonates with how she approaches druidism, her deep and abiding reverence for the Earth that led her to choose druidry over witch magic. And then there’s Owen – crotchety, ornery but with bits of wisdom poking through his general rough and readiness. He’s dealing with a major case of culture shock but he’s dealing with it in a way that is both very druidic (with its focus on learning) and shows just how tough he is. I also like the byplay between Owen and Atticus – he still sees Atticus as his young apprentice but every now and then realises that Atticus is literally 2 thousand years older than him

It’s interesting to see a book from multiple points of view because it not only lets you see the different characters through different lenses but if the author can pull off the different voices and make them authentic it really carries so much to the characterisation.

I also loved that they were doing their own thing. It’s not just the Atticus show – Granuaile is a grown woman, a full druid and fully capable of doing things by herself. She doesn’t need to check in with Atticus all the time, she doesn’t need his permission or his guidance. He’s definitely the better druid – 2,000 years experience and all that – but she still has skills and talents he doesn’t and she doesn’t need a babysitter. I love that, now her training is finished, she is definitely more than a sidekick; she’s a character in her own right. And she will do her own thing. No, she’s not always successful, yes she faces tragedy and set back – but she also gets to be the hero and save Atticus and a considerable amount of the day as well – so her set backs are not even remotely  linked to her being lesser.

We also have an excellent look back at what she left behind. After all, Granuaile faked her own death and left her old life behind. She had family, she had loved ones, people she valued – I’m glad we caught up with that, addressed it and had some closure on it. It was beautifully, deeply sad – but also wonderfully mature. The same goes with her failings, she has grief, she even has anger – but she also has common sense; she recognises what she can and cannot do, she realises who she must blame she’s poignant without being melodramatic. I like that a character can have a big, dramatic, awful moment in their lives without the author leaping on it as an excuse for them to do something really freaking stupid to cause problems for the future.

The three plot lines also made an excellent whole. Granuaile is duelling on a very personal, one-on-one level to try and face on particular battle, reduce to the destruction and trying to foil the enemy. Atticus is pursuing the meta – he’s talking to the coalition of gods that are supporting him, revealing more and more of the truth (aside: I love how crafty and cunning the gods are. Even gods we thought we understood  - the gods are way better at plotting than we are!) and just what is at stake (I also love the idea of evil gods not joining Loki’s campaign because they have egos and need to be the centre of attention. Lucifer isn’t going to get involved in Ragnarok because it’s not HIS apocalypse). Owen is very personally getting his own stuff together, but he’s also reminding us of the personal connections of a lot of the characters – the werewolves and the Tuatha De Danann – he’s bringing a personal element that Granuaile and Atticus don’t have time for and keeping the relationships alive. Each story had its place and each story carefully

And we have a big dramatic show down and an epic battle (which was well and truly awesome) that struck a perfect balance between showing us why the gods valued the druids while at the same time  how very clearly the druids are not gods themselves. It also has a good amount of thinking from everyone involved – like, when facing an awesome battle scene, the Tuatha de Danann recognising that maybe, they have screwed up, there is a reason for the battle and they are at fault for not realising it sooner. There’s a lot from Atticus as well and Owen and Granuaile – a lot of these characters recognise they’ve screwed up. They realise they’ve hurt others. They realise they’ve made bad decisions. They realise they’ve made poor choices – they have a lot of regret and guilt and pain. Which they deal with – no, they deal with, move on and try to fix things and resolve to do better next time. They have regret but they don’t let regret drive them to more mistakes (especially since Atticus has one of those excellent “I’m 2,000 really” moments of wisdom)

There was some nice world building development as well – including the limitations of gods and what it actually means when a god dies.

There’s also a whole lot of fun. Not only do we have Oberon but we have Orlaith as well – we have 2 hounds. DOUBLE THE HOUNDS! No sausage is safe! We have yetis with their beautiful art and ice hockey which is awesome. We have a lot of skipping around the world and the Irish gods who are always immense fun (and Perun who is even more so). We have Owen, copious amounts of booze and getting into the modern world (he discovers Guinness. The Irish are not completely lost).  It’s epic and exciting and adventurous – but so fun which is such a nice balance to hit.

This review is scattered all over, because there’s so much I want to talk about, so many epic, emotional, wise and plain awesome moments I want to include but simply can’t without dishing out massive spoilers

We do have a lot of globe trotting in this book which means a fair few incidental POC characters in India and Japan. We explore the pantheons of both as they become involved and there is definitely some decent research here – at least some decent attempt to delve into some of the beliefs and legends behind these gods. Jesus makes a reappearance as a Latino man this time. Laksha is around for a decent part of the book as well, bringing in a heft whack of Indian mythology and being her usual interesting character. I like her and I like how she works with Atticus and Granuaile – Granuaile is in a perfect position to know Laksha and trust her while Atticus continues to have his deep suspicion of witches. There is an element of the Indian people being superstitious to a very deletious degree but they are facing the supernatural up close and personal at the time which is understandable – and in a world with the supernatural everywhere, is it a sign of being backward to be superstitious?

We also have a couple of Hal’s werewolves being POC to try and dispel some of the POC=foreign trope.

Another pack of werewolves is led by a married gay couple. They’re there and, apparently, lacking in stereotype (it’s hard to say because they’re more mentioned and referred to than actually speaking and being part of the story). It’s not a lot but it beats the past erasure.

When I first picked up this book I was wary about the three POV storylines and even more wary about the introduction of Owen. I didn’t see what he would add to the plot or this already epic world. But it worked, it really worked and enriched the wonderful things we already had. I could wish for more involved inclusion among the main cast, though I’ve certainly read much worse. In terms of plot, characterisation, writing, world building – I just have to praise, I honestly have not one single complaint or nitpick. I love it, I read it without a pause even for coffee and when I finished I was sad because now I have to wait for more Iron Druid goodness.