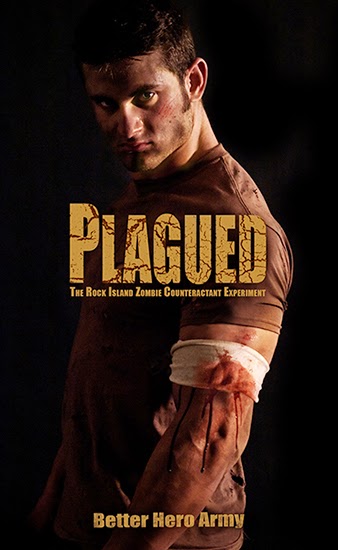 Mason is a soldier with a new posting – to one of the remaining settlements in the plague states, one of only two places left where zombie slaves are captured and sold into the US. It’s not a reward – this is where the screw ups go, those who need to be shuffled out of view and Mason, with his record in Egypt and his PTSD, is a prime candidate

Someone else also thought so – but not to guard zombies in cells, but to be part of a plot to change how zombies are treated and finally reclaim the plagued states. Mason is an essential cog in that plan

And, possibly, a disposable one.

This book, like the first book in the series, is short – very short. But it isn’t written like a short story.

So we have a long introduction, a recap to the world, some excellent characterisation, some great world building, lots of slowly built foreshadowing, some devious hints to the world… all of it is building at a nice steady and ominous rate. It’s really well done…

…then the REST of the plot and the action and actual stuff happening is rammed in with a crowbar, fastforwarded to 20x speed and is a blur of barely understood, slightly incomprehensible splurge. It’s one of those books where I wonder if a deadline was looming because it was all nice and steady then it was zomg finish it! Finish it! No, I don’t have time to explain that it, just happened – characterisation? Gah, just throw in a random doctor, she’ll do – explosions! More explosions! MOAR EXPLOSIONS! And half-breeds and escape through doors which are open and throw in a flashback and memory loss – there, done!

Those last two also didn’t help. The protagonist has had a traumatic experience as a soldier in Egypt and many references are made throughout the book. He also speculates a lot on why other soldiers are dispatched to this posting and what they could have done wrong. Then, because of the plot, he suffers an injury that shakes his memory and causes confusion and makes him mistake the other soldiers for people from his past which adds to an odd moment which seems to be telling the current plot as a flashback from the future (I didn’t quite get it. It could have been talking about events from the previous book and have been a memory?).  It’s probably pretty clear that I had trouble following – confused memories and fast pacing combine to completely lose me.

At the end, I kind of get what happened by piecing everything together. And the plot is a fascinating and a crafty one. We get to hear a lot more of the world and how the US has suffered by having so many states given over to zombies as well as the attempt to restore those areas – which means clearing out the zombies. And part of that will inevitably mean stopping the new slave trade that depends on the zombies both as a plain moral imperative (which is clearly seen) but also to gather sufficient impetus to actually seeking and implementing a mass cure for zombiedom.  But on top of that is the conflict of chosen methods – and how much does the end justify the means even when ending such a vile practice? Especially when the “good guys” feel like a nefarious cabal.

The plot is also interesting in the way that Mason is pulled towards the conspiracy whether he wants to or not. He’s subtly and carefully manipulated and, possibly, kept ignorant of what he is truly being prodded into (again, the confusion means I don’t actually know what Mason does and doesn’t know).

There’s also some interesting parallels and references to American military strength being used abroad – in this book in a conflict in Egypt. The way the Egyptians were treated carries a lot of parallels to how the zombies are treated – to their mutual dehumanisation. It also includes a lot of abuse and violence that becomes so natural when regarding people as either the enemy or as chattel.

Of course the flip side is that we are comparing and contrasting the Egyptians to zombies which is also dehumanising in a narrative sense not just as a narrative tool. We do have other POC in the book – the chief scientists is a Black woman - she and another doctor are the only women in the story. Both are intelligent and highly competent. One ruthless, the other compassionate, both driven. But the book has the whole cast pretty much call her a bitch over and over not only is it a grossly unnecessary slur, it’s also deeply clumsy, weak characterisation – she is demonised with slurs to make her seem like an unpleasant,  hard person when she never actually displays anything like that behaviour. She’s also the victim of some more sexual shaming and severe misogynist slurs in a truly gratuitous manner which doesn’t even have an attempt for a story reason.

A number of the other soldiers are also POC – including one Black soldier who can’t control his tongue (but speaks a lot of sense) and a number of Latino soldiers. There are no LGBT characters at all – but the book repeatedly uses anti-gay slurs for no apparent reason.

So, in the end we have a book with an awesome concept, some fascinating plot, a lot of world building backed with a racially diverse cast willing to tackle some heavy issues. Which then throws in a lot of slurs, bemusing flashbacks, some terrible pacing and a whole lot of splurgy confusion that left me beyond confused.