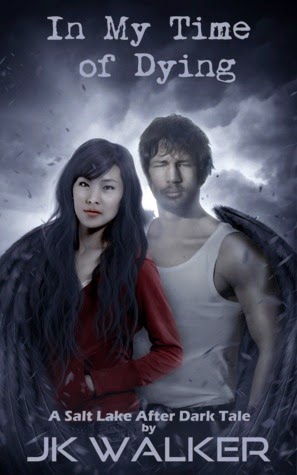 David died when a serial killer came to his home. His pregnant wife survived the attack

Now he’s a ghost and driven by his desperate devotion to her to follow her, watch her and do whatever he can to protect her. It’s a compulsion that grows the longer he is dead

A compulsion that is not only unhealthy – but can lead a ghost down a very dark path.

In the first book of this series that was a fun,interesting, helpful character who helped Jasmine assimilate into thesupernatural world, David.

He was a werewolf and he pretty much defeated most of the werewolf tropes we’ve come to know and loathe. He was kind, he was patient, he was funny, he was wonderfully loving to his wife, Angel, and generally had all the hallmarks of being a pretty decent character and an excellent counterpoint to the werewolf Alpha who was a much more “traditional” werewolf depiction.

He was also one of Jasmine’s friends – one of the things these books have been so good at showing is Jasmine’s friendship with the other characters, actually spending social time together and doing silly things like bad movie nights. It’s one thing I’ve always liked

It was sad and disappointing and really showed how excellently the character had been developed that I missed David. The character deserved more than to be killed off for pathos

And so we have this book. David the ghost whose desperate love and devotion to Angel forces him to haunt her. It’s powerful, loving and tragic – as the overwhelming love and protection David feels for Angel drives him to make her more and more unsettling and dangerous to her

Not only is that haunting  and powerful, it’s also a wonderful subversion of the genre where this kind of stalky-obsessive love is too often presented as the pinnacle of affection and devotion. This book is clear – it isn’t healthy and it isn’t good for either party.

Another element I loved was the concept of pack – too often supernatural groups are sources of politics and drama and nifty stories, it’s nice to see the support system they bring, good to see reasons WHY these supernatural creatures would want to join a pack other than for byzantine storylines.

On top of that, we have some nice development of one of the other victims as well, reminding us that these characters weren’t just nameless bodies to pad a serial killer’s death list. It was nice to have some posthumous humanisation of them both, to take time out in a book to make sutre they’re not forgotten

All of this is capped with some excellent world building into the nature of ghosts and a truly unique take on them, evil spirits and their abilities. It was a good novella that perfectly added something new to the main series, complemented the main series without being essential reading to understand the same series – just what a series novella should be.