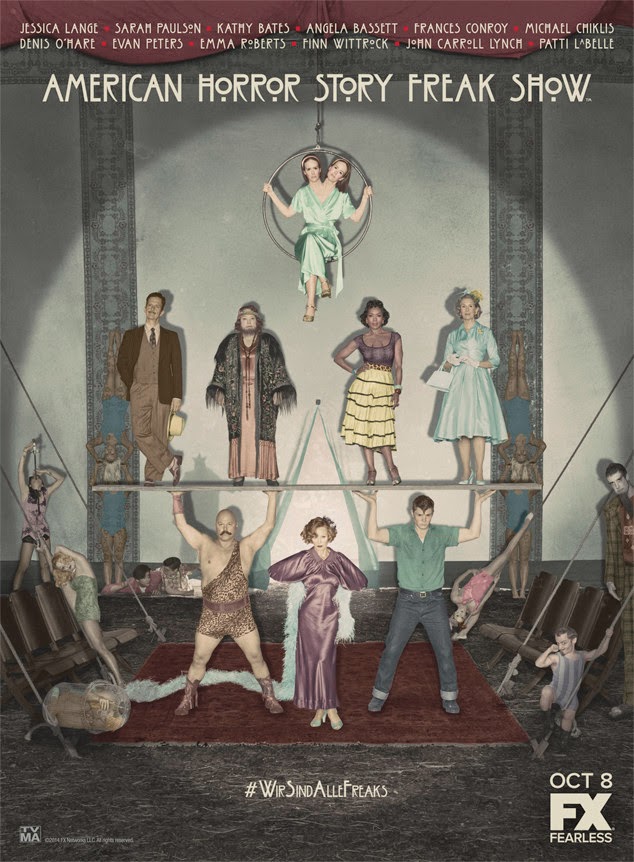 After an ominous yet vague voice over beginning we have a title card telling us we’re in the small town of Jupiter in Florida and it’s 1952. And an unlucky milk man finds the body of a murdered woman. Armed with a rolling pin he goes upstairs in the house to investigate (this is where you call the cops, get the hell out and let the professionals deal. Or at least find something more lethal in a kitchen than the pastry section). Whatever he finds makes him scream

Cut to a hospital where a patient is rushed into surgery – whatever’s wrong with them, it causes a nurse to lose her lunch. And it takes a lot to make a nurse throw up. What seems to be getting everyone in a major tizzy are conjoined twins.

By the nurses’ gossip afterwards, it seems the twins were hidden away by their mother (the murdered woman) and the nurses (and newspapers) dramatically exclaim how hideous and deformed they find the twins. Into this hospital steps Frauleine Elsa who runs her “cabinet of curiosities” and is very interested in the twins – and arranges to visit as a candystriper. There is a huge amount of ominous build up to our first look at the twins which feels awfully gratuitous and unnecessary when Better and Dot are revealed.

From there to a couple having a picnic – well, about to have sex on a picnic blanket anyway right before being attacked by a really terrifying clown (for a second I was about to praise the show for having a woman who is unashamedly sexual especially set in the 50s, but then the sexy woman was serial killered. She even does the Fleeing Damsel Trip).

Back to Elsa in a diner and engaging in film criticism when she sees a man, Jimmy, across the room wearing large gloves. She knows him and she chews him out for leaving the show- which he thinks isn’t going to do so well anyway.

This seems to be reinforced by their landlord only refusing to evict them when Elsa seduces an extra month out of him. Elsa tries to get Jimmy in line by referencing his “deformities” and his mother ending up in an asylum. He thinks them all being locked up is inevitable. They leave – Elsa with gall and class doing so without paying.

To a Tupperware party, with dated nibbles (but a shocking lack of ghastly gelatin creations) and women discussing how sexually frustrated they are. They’re queuing up to see Jimmy whose large, different hands are apparently nature’s own super-vibrators. And they’re also selling Tupperware at the same time which I don’t know if it’s more or less disturbing.

Elsa tries to help Bette and Dot prepare to speak to the police about their murdered mother – it’s very quickly clear they’re lying and Elsa advises them to make up better stories. The twins try to run off, to escape the police and we have a flashback to what happened to their mother: Bette wanted to see a movie and was extremely frustrated by being constantly confined in the house. It’s pretty clear that their mother views them as a monster – and Bette stabs her. Dot tried to stop her (though Elsa accuses her of not trying and feeling guilty) – and then later tried to stab Bette which is why they were injured. Elsa brings them to her freak show to save them

Bette is super enthusiastic, Dot much much less so – but both are pretty charmed by Jimmy. We also meet Ethel, the bearded lady, and no-nonsense matriarch who thinks Elsa is a wonderful saviour of them all and recounts her own tale of Elsa saving her from prison, giving her a chance to perform and reuniting her with her son (I take that to be Jimmy). She lays out the harsh reality – the freak show is as good as it gets for people like them.

Not all the performers are equally reassured since the police are looking for the twins – but Elsa (who apparently has escaped the Stazi) isn’t worried. We also have a drive by attack from the locals (and Jimmy’s rage over it) making the tension clear.

Jimmy takes the same concern to his mother, Ethel – complaining about always leaving through the back door. But Ethel doesn’t see any other choice – especially since television has made freak shows less popular. She adds “there’s no normal for us”.

We also have news of yet another couple being murdered in the town by the terrifying evil clown (though the reporter is also linking the twins’ mother to the dead) who is also kidnapping people – including an 8 year old boy and the girl from earlier who pulled off the Fleeing Damsel Trip. She tries to comfort the boy where they’re both locked up in a trailer and the creepy clown is creepy with balloon animals balls and tantrums.

The sheriff arrives at the freak show to arrest Bette and Dot – and while he has some indication his case largely rests on “they’re monsters”. Jimmy whistles and calls “Amazon” Evie, Paul “the painted seal” and “legless” Suzi. When the sheriff calls them freaks, Jimmy slits his throat. Bette says that Jimmy saved them – but he adds that he needs them to save them (to stop the show failing).

The whole show has been hired by a ridiculous pair of rich people – the ludicrously spoilt Dandy and his appallingly doting mother Gloria. After a run through of various members, Elsa comes to the stage with a truly horrendous musical act – glam rock Marlene Dietrich – which is probably just perfect for the show. Afterwards, Elsa seems confused and upset

Dandy sneaks back stage and is thrilled by the twins – and his mother offers to buy the women. Elsa argues back that they’re their headliners and turns to ask Bette and Dot’s opinion. They choose to stay – calling the show their home. Gloria leaves with a nasty jab at Elsa’s singing

The gathered performers take the sheriff’s body away from the show – after a passionate speech about having to protect themselves from people who judge them by Jimmy, they all fall on the body and slice it to pieces. Evil clown watches them

Elsa, on opium, shakily talks to Ethel – confessing she brought Bette and Dot to the show so she could be a star – she asks if it’s too late for her to do so. Ethel, of course, reassures her that it’s all she deserves. As Ethel leaves, Elsa reveals she’s missing her legs below the knee.

Some shows we love unreservedly. Some shows we’re wary about. Some shows we have a love/hate relationship with. And some shows can be best characterised with a semi-coherent “why?! Why would you do this?! What… oh dear gods no!”

That would be American Horror Story. Which means I am… leery this season. Freak shows in the 50s are a topic that can cover a lot of complexity. Naturally there’s the treatment of fellow human beings like zoo animals, a concept that should be disturbing to everyone who isn’t a TLC executive. At the same time, and as has repeatedly being pointed out already, these shows offered employment and resources to people at a time when there were few other options (and where state or charitable aid could be… unpleasant or inadequate) and many people with various disabilities, conditions or non-typical bodies did (and continue to – in various places and in various guises) find employment and the closest thing to autonomy through them (including conjoined twins). Of course, many more were exploited cruelly by these shows simply because they had no other options – and just because something provides a refuge when there’s no other choice doesn’t make it inherently good, so much as comment on the badness of everything else

There’s a lot of complexity there – and will American Horror Story handle that?

They also do have a number of disabled people or people actually with the non-typical body types playing roles on the show – which is always preferable to seeing able bodied actors with CGI and prosthetics. I’d like to see how they are used – as full characters, or as authentic background for Elsa, Ethel, Jimmy, Bette and Dot.

I’m also told that Ethel’s accent is actually a thing. This scares me more than the clown.