Sleepy Hollow, Season 2, Episode 3: The Root of All Evil 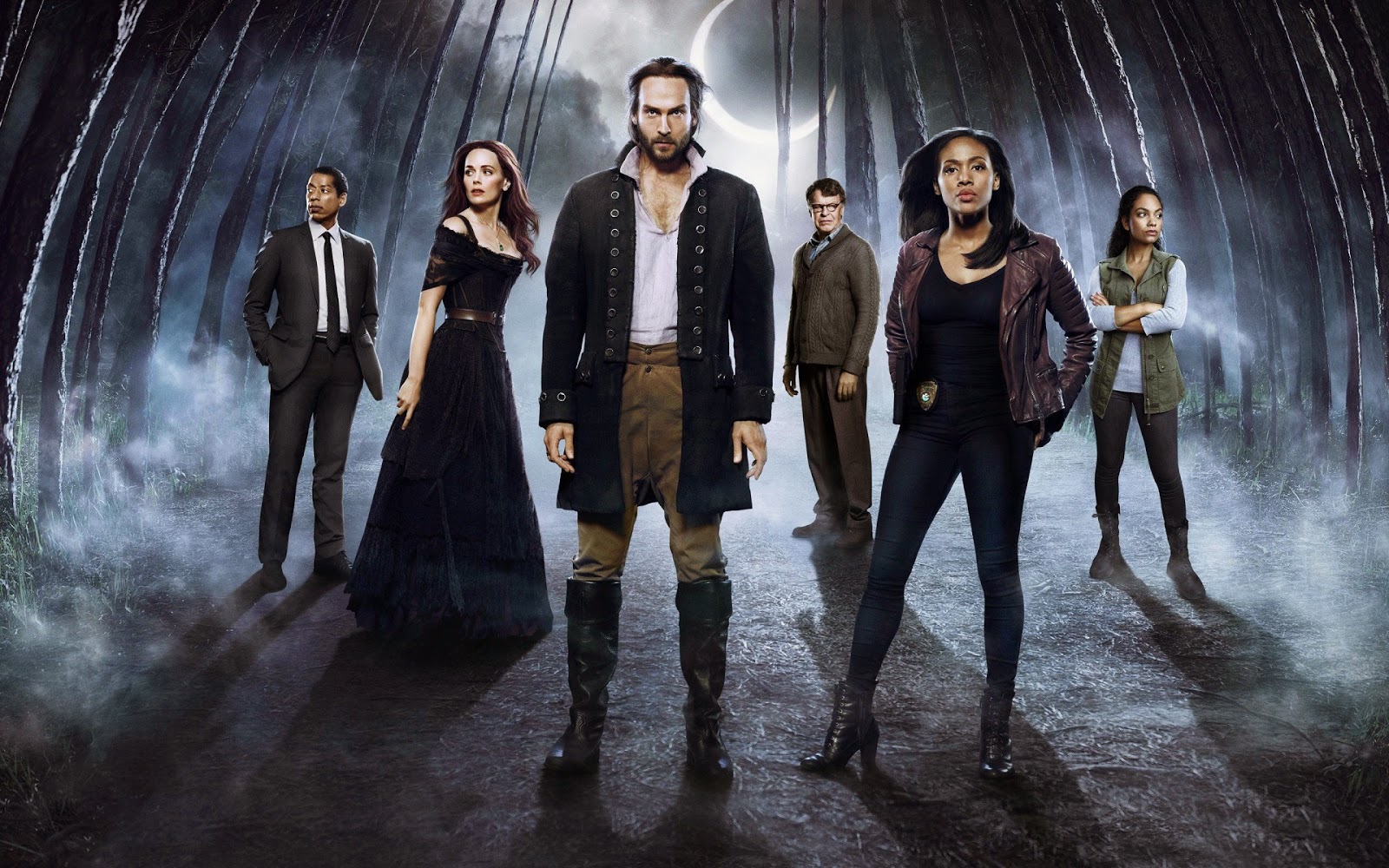 Abby and Ichabod head to visit Frank in the psychiatric hospital; but Henry, Frank’s new lawyer, has barred them from visiting. Beware the Lawyer of War!

Sherriff Reyes interval! She talks to Jenny about lost dogs, her mother and generally avoiding a downward spiral. Alas, all irrelevant until someone clues her in

Back to Abbie and Ichabod - they track Henry down (and have a brief acknowledgement gay people exist in a not-even-close-to-smooth protest about hats in doors for more Ichabod comedy) and while Abbie stops Ichabod from just charging in, they hear a gun shot. Abbie charges into the bank but tells Ichabod to hold back – Reyes has stopped him being part of police work.

In the bank a woman has shot the guard and is robbing the place. Abbie recognises her as an employee of the bank. The woman is clearly being affected by some kind of woo-woo. While Abbie is trying to talk her down, Reyes comes in and shoots the robber; the camera focuses on a coin that falls out of her hand so I assume it’s going to be relevant.

Afterwards Abbie is blazing, she knew the woman and knew she’d never do anything like this; woo-woo is definitely involved.

They review security footage (Ichabod having to sneak in to avoid Reyes) and see the raging bank teller pocket a coin that Henry brought to the bank. Ichabod remembers a dastardly plot from the Revolution to spread evil coins, coins that make you turn against the people you’re loyal to – which also was used against Benedict Arnold.

To bad guys HQ with Death (Abraham) and War (Henry) arguing (the mirror shows Abraham’s head for some reason but it lets us hear his side of the conversation) because apparently Abraham is being kept in the dark and forced to remain in the house while Henry gets to leave (because Henry has a head, which is kind of needed to blend in). Henry blames Katrina for influencing Abraham and tells her to stop confusing the poor simple Death horseman.

Back to the good guys and Jenny is out on community service (I have no idea of American laws – you get community service for bring a sack of illegal weapons into a police station?) Jenny brings up a contact she has who is an expert on rare artefacts – a Nick Hawley.  But she’s more focused on Reyes – she’s angry at Abbie for hiding the fact Reyes was in town when their mother was locked up – especially when she uses Abbie’s log in to show that Reyes was the officer who actually locked their mother up in the psych ward. Abbie tries to see a reasonable side that there was a reason to have their mother institutionalised – Jenny leaves when Abbie defends locking up their mother.

Abbie and Ichabod go to see Nick Hawley who wants paying for his information and, when they refuse, asks to come along with them (Ichabod recognises him as a smuggler and looter). They do do some brain storming and realise the coin is one of 30 pieces of silver from the Roman Empire yup, those 30 pieces of silver.

Meanwhile the current coin holder and bomb builder blows up his dad and his dad’s shop. Henry has also taken up creepy model building to make a replica of the entire town.

Reyes tries to confront Abbie about accessing her files, but Abbie hits back with the revelation about her mother – and how if Reyes followed procedure her mother would be in prison and not in the psych-ward where she committed suicide. It’s all awkward enough to make Reyes back off.

Henry also appears in the police station and he and Ichabod snark back and forth a little while Henry reveals the evil coin doesn’t turn people, just brings up the darkness inside. Ichabod also has an argument with Reyes about his involvement and she has a problem because he doesn’t have any ID or record of his existence.

Henry did manage to take the Evil Coin from police evidence – and give it to Jenny who is doing community service, raising all her anger at someone (probably Abbie).

Ichabod and Abbie meet up with Nick and Ichabod has several rants about many things (he’s behind his episode quota) and Nick warns them that Jenny borrowed a gun and is acting weird. Abbie and Ichabod instantly (and correctly) assume she has a coin and is coming after Abbie. While Nick is bemused he does know that the coin’s evil effects can be countered by holy glass (for random reasons) so he and Ichabod head to a church where Ichabod goes to confession to distract from Nick smashing stained glass windows.

Abbie tracks her sister’s cell phone with the super helpful lady in the police station to find Jenny is heading to Sterling Forest – where Reyes is (she’s hunting with a state official who may get them more money). Maybe Abbie isn’t Jenny’s target after all.

Abbie, Ichabod and Nick all head into the woods - with Ichabod warning Abbie about Nick again, but Abbie says they need help with Frank locked up and in Henry’s hands and Jenny all evil coined. She doesn’t mention Katrina which Ichabod takes note of; Abbie is not 100% behind including Katrina on their side (me neither) since she’s Henry’s mother (cut to Katrina trying to spread discord between Abraham and Henry).

As they approach where the hunters are, Ichabod and Abbie work at ruining Jenny’s aim on Reyes. They surround Jenny and Abbie talks to Jenny about their shared rage she distracts her and stops her long enough for them to disarm Jenny and remove the coin – Nick catches it with the stained glass

And then he disappears with it – as Ichabod predicted.

Later, Ichabod visits another inmate of the psych ward so he can speak to Frank about Henry banning them from visiting. Also the lawyer is the horseman of War and Ichabod’s son – see this is why they need to recap Frank more often. Frank wants to get out, wants to see his family but Ichabod warns him – if Henry wants Frank out, then the safest place is to be inside the institution.

Abbie meets with Reyes and Reyes gives her her mother’s records. She talks to Ichabod about them – the records mention demons; she wants hunted by Moloch. Ichabod throws in some more about Benedict Arnold. And Nick joins them – he hasn’t sold the copin because he’s hoping to get all 30 (hoping they all turn up after 2,000 years, apparently. This guy’s an illicit antiquities dealer?) and he gives Ichabod some false ID – which has been frustrating him for some time.

he leaves and Ichabod and Abbie are left with a big “we must trust each other” moment (tellingly this follows in an episode where Abbie has expressed doubt in Katrina which Ichabod hasn’t argued against. Ultimately, it’s a case of they can trust each other… everyone else not so much).

Was that Sleepy Hollow’s LGBT inclusion moment? Look two unnamed men in the background holding hands! And lo, Ichabod has watched glee. Hey we have no LGBT characters on this show but we can have a joke! Yay inclusion!

We also have a mental institution where the sane people are confined so unjustly and mentally ill people serve as disturbing wall paper.

On the plus side we have Abbie and Jenny who still have their issues, their anger, their different way of seeing things but, ultimately, are still loyal to each other and still share a lot. They may not react in the same way or look at things the same way which may always be a barrier between them, but they have that connection – and that connection is strong enough that even an evil coin couldn’t turn Jenny against Abbie.

I actually kind of want Katrina to be evil. Because if she’s evil then her ineptitude for the last, well, ever, has all been by design. Evil is preferable to incompetent damsel

Frank also has an interesting conflict now – he can get out, he can be with his family; but doing so may mean handing Moloch an advantage. Reyes is also still interesting – she’s a problem, she’s an obstacle but she isn’t a bad person or even bad at her job – she is reasonable and presented as such. Her being in the way isn’t because she’s spiteful or malicious, but because of the awkward nature of the whole secrecy.