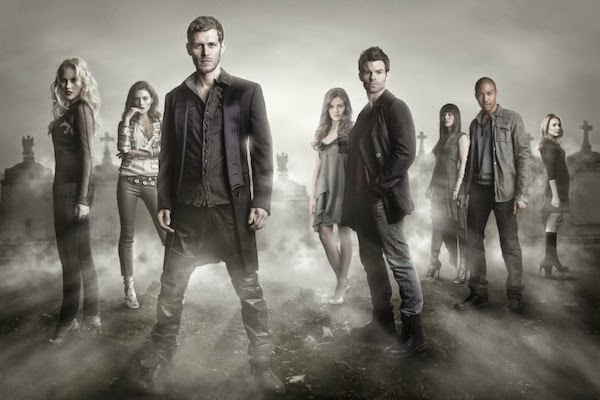 Rebekah recaps the last season and the disaster of the last episodes by telling it all to Klaus and Hayley’s baby who she now looks after.

The Guerrera family of werewolves have taken over New Orleans but Elijah is still standing in the way of their plans, frustrating a casino development. Klaus, meanwhile is having a tantrum (as he does), frustrated by the magical Moonlight Rings that steal his strength every full moon to power up the Guerrera werewolves. Elijah has found the 12 rings, but he’s also concerned that Klaus and Hayley are avoiding each other; in fact, Hayley is avoiding everyone in her grief.

Marcel and Camille most definitely are not avoiding each other, though they’re trying to keep it “no strings attached”. Camille confirms that the Guerreras are in control, vampires have been kicked out of the Quarter and the humans who know about the supernatural are going along with things so long as tourism keeps up. Davina has gone to school, leaving her witch coven. Marcel is suspicious of Klaus’s inactivity though, he expects he’s plotting.

To Davina who is approached by Oliver, werewolf supporter of the Guerreras and betrayer of the Crescent pack, talking about Cassie (another harvest witch) now merrily making moonlight rings for the pack. They try to kill the vampire store owner trying to pass as human and Davina intervenes, rescuing him

This makes Francesca annoyed and she confronts Cassie of the witches since they have a deal that the witches won’t interfere – Cassie washes her hand to he matter, coven rules don’t apply to Davina who left the coven. Francesca is stressed, very very stressed, especially by Klaus’s apparent inactivity.

Cassie seems to find Francesca cracking quite amusing as she explains to her new cohort Vincent – of course, Cassie and Vincent are the bodies occupied by Esther and Finn (Klaus and Elijah’s mother and brother). It’s clear that while Cassie expects Francesca to implode, she’s still going to be Klaus and Elijah’s enemy

Camille is being followed by annoying werewolves who she general scorns and she visits Klaus in his big empty house (Klaus watches her while using vampire speed to disappear whenever she tries to see him). Elijah does see her to say Klaus isn’t taking company at the moment; she wants Klaus and Elijah to ally with Marcel to drive out the Guerreras – Elijah shows her the door.

Hayley isn’t going along with any particular plans, even Elijah’s cunning, she’s angry, upset and wants to see Francesca sliced and diced. Naturally there’s lots of big sad tension between her and Elijah.

Marcel, meanwhile, is using Josh to pull in groups of people to look out for potential vampire candidates when Klaus joins them, apparently he listened to Camille. Marcel is concerned at the number of wolves flocking to New Orleans but Klaus is focused on getting the 12 rings back – Marcel (and I) is confused as to why Klaus just isn’t cutting the hand off every werewolf. The reason they don’t is because they Guerreras worried may have the White Oak Stake – the one thing that can kill an Original. Klaus and Elijah are now ready to make their move because the fact the Guerreras haven’t attacked in the last month is a pretty strong indication they don’t have the stake. Joe, the man who Davina saved, also joins them, since he has experience of killing Guerreras.

Next character (sooo many) us Mikael, the Original’s evil dad, who is currently magically enslaved by Davina and very not happy about it. She’s very unimpressed by his not happiness. She’s happy for Mikael to kill Klaus but not before she’s used a spell to unlike Klaus’s sire bonds so his whole line doesn’t die with him.

Klaus starts to plan his attack – in the full moon when he is weak for surprise element, though Elijah is still wary about the stake. The plan involves Joe telling the Guerreras about the stake (and Francesca revealing she doesn’t have it – but asking Ether/Cassie to cast a spell to find it). They also get Elijah on hand – which she’s fine with so long as Francesca dies.

Cassie’s spell doesn’t work so Francesca pushes Joe – he passes on a rumour that the priest has it. Which means more werewolf harassment of Camille. She hands over a location and a key to the werewolves wrecking her home while exchanging secret nods with Elijah.

Francesca plans to get the white oak stake and attack Klaus while he’s weak on the full moon – she sends out her wolves to do the plan while she cowers at home where the vampires can’t get her. This doesn’t amuse Oliver the traitor wolf but she is determined to lead from the back in a bunker

Her wolves go to the warehouse trap, full of wolfsbane sprinklers – Marcel claims two of the rings (and presumably kills all the wolves along with ripping arms and hands off)

Other wolves attack Klaus’s compound where Hayley claims another three rings as she works out 2 months of frustration on some very unfortunate wolves including Oliver who she owes for destroying their pack (though she leaves him alive for some reason).

Elijah attacks Francesca’s house and claims another ring.  Then waits outside for everyone to join him. This is when they really should all have been cowering in the basement, but, no they go out to challenge him.

With each ring Klaus gets stronger. Which means the wolves sent to attack him get a bit of a surprise – he paints pretty pictures with their blood (earlier he did complain that his art needed the blood of his enemies).

Elijah can’t go in Frencesca’s home but he can coat the windows with blood and throw severed heads through the door. He has a very very very good sexy evil smile as well. Francesca is smug though, Elijah can’t come in (he could throw stuff. Or shoot you. Or stand there looking devastatingly sexy – do you have anti-sexy Elijah weapons?). Elijah has a beautiful lecture about various things that least to his manipulations that lead to the city invoking eminent domain for Francesca’s house. It’s not her house any more, it’s now public property.

In the aftermath Klaus is happily painting in blood, there’s only one ring still out there. The remaining ring is on Francesca’s hand and she’s driving at great speed out of town (her brothers sacrificed themselves to help her escape Elijah). On the road she is found by Hayley who very much wanted her revenge on Francesca.

Back at the mansion, Hayley rampages in fury. Elijah stops her but Hayley is torn – killing Francesca even as she begged for her life didn’t make Hayley feel better, being a hybrid doesn’t make her feel better – she hates being a hybrid, especially after she’d just learned the joy and nobility of being a wolf and now she has killed 8 werewolves, 8 people she once led or hoped to lead. Of course that tears Elijah because what Hayley is saying is she’s horrified and disgusted about becoming a vampire. This also hits Elijah’s own self-loathing –Hayley has noticed that Elijah looks at her differently now she’s a vampire.

Josh goes to Marcel to tell him the Guerreras got Joe – it looks like no-one kept Josh in the loop. Josh also doesn’t know what everyone is fighting for – and Marcel goes on about how important the city is to him and to Klaus – with a hint that he and Klaus will be at odds in the future. The first of their vampire recruits also shows up

To Davina who meets Kaleb, new character who was watching her earlier.

Elijah and Klaus angst together with all of Klaus’s guilt and Elijah’s endless quest to redeem him. He also hopes that Klaus is the one who can comfort Hayley with their mutual pain of losing their child (and both being hybrids). Klaus goes to her and they have an excellent, powerful scene together. They will also bring their daughter back once the city is secured, including leading the werewolves.

Marcel and Camille talk, confirming that Joe is actually dead – and Camille decides she needs to break it off with Marcel because she wants to leave the supernatural behind and focus on humans. Unfortunately for her, that means meeting up with Vincent (Finn).

Vincent (Finn) isn’t entirely thrilled to be a vulnerable human nor is Cassie (Esther) thrilled to be a teenager. And Kaleb joins them – yes Davina’s new friend is the last missing Original: Kol. Esther continues her evil plotting to take over New Orleans.

Yes yes yes. Sometimes I just love to see the Originals take off the gloves and make it clear that they are the biggest, baddest, most terrifying supernaturals in the world. It doesn’t happen often and it can be so frustrating sometimes when the Originals are tip-toeing around things they could destroy. But now and then they take the gloves off and it’s pretty gloriously epic – yes, it’s shallow but I love it.

It does link into one of the biggest issues with the Originals - the sheer power of the Original family. The Guerrera family have taken over New Orleans, but by definition that will only be temporary before the immortal and indestructible Originals start mincing them (and that’s aside from the vampires ability to infinitely replenish their numbers). So I wasn’t surprised at how quickly the Guerreras went down – and I think I’m glad they did otherwise we’d have another season were many episodes pass where we pretend the Guerreras are anything resembling a threat to the Original family (and, really, just dimissing Hayley and Elijah as Franesca did was ridiculous. Especially Elijah – yes werewolf bites can weaken him but he’s still an Original – how many wolves die before one gets a nibble in?).

No, no drawn out pretence. We start the new season with the Originals reminding us what kind of epic force they are, which is an excellent foundation. Does it mean we’ve reset a lot of what happened in the last season? Not really – because the Guerreras were never a credible threat in the long term – they could cause the set back but they never had the power to hold the Originals down. This was a better way to reset the slate, remind us where everyone is and who everyone is and be ready for the new season

I think the subtext of Marcel’s speech to Josh was missed. Marcel was talking about how vital and important the city was to him, the soul of the city, his blood and the blood of his friends that have been spilled in the street – but that kind of emphasised some of Josh’s point: this isn’t important to him. He’s been drafted into a struggle in which he has no stake and no real desire to fight which has kind of been his story since the very first time he appeared – I wish Originals would run with that.

I also don’t see why Joe had to be sacrificed, he gave the werewolves what they wanted, he could have escaped in the fighting- why did his have to be a suicidal role?