Witches of East End, Season 2, Episode 12: Box to the Future 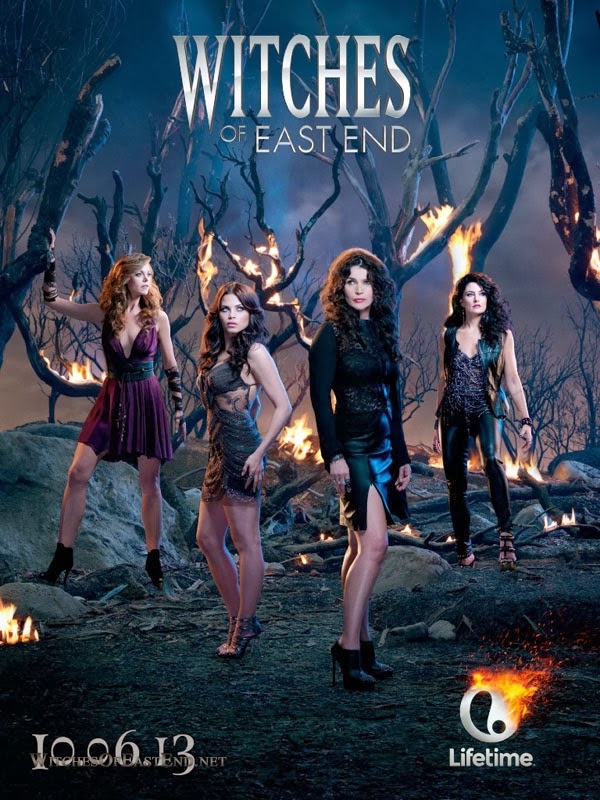 Killian takes his Romeo & Juliet potion (note he’s actually just taken something from people he has no reason to trust and they even told him it was poison. Oh this show and the decision making) which comes with bad skull CGI effects. It also comes with a dream of Freya telling him she’s alive and gives him a big, hellaciously ugly flower and tells him to call Ingrid. He wakes up and staggers to his phone

Ingrid’s still pretending to her granddad and brother Frederick that she’s totally on their side, honest when she gets the call from Killian that a) he’s poisoned himself and b) a red flower with long roots and a REALLY vague description may be useful for saving him. Ingrid is a better person than I since she agrees to rush over to help rather than arrange his funeral.

Thankfully Ingrid knows exactly what flower they meant though it only delays the inevitable. He has to keep taking it and he drops the bottle. You had one job!

Evil granddad is having trouble maintaining the body he’s possessing and making it look like him. Frederick is also pretty sure that Ingrid has “doubts” with all the time she’s spending with “Bastien” (apparently Dash in a former life). Granddad resolves to do something, probably evil.

He goes to visit a confused Dash and ties him to a chair (I’m impressed that his kidnapping spell has such elaborate knotwork). Evil King Nikolaus rants on about how Bastien was all ruthless and evil when it came to getting what he wanted – and he was loyal to the king; he wants him to be loyal again and leave Ingrid alone.

When he leaves Ingrid arrives and Dash tells her all bout the evil King’s ultimatum and she plans to use some deep dark magic by unburning Dash’s dark magic journals. Yes, unburning. Which they do. She leaves the evil books in Dash’s hands – which is such a bad idea.

Anyway Joanna runs off to collect the Spirit box which is why they went to the past in the first place and Wendy has lost the key to the time door. Which is very very bad. While looking at the key, Freya runs into Edgar Allen Poe (Killian in a past life) and she sees him as Killian even though Wendy clearly doesn’t. They then have to get the key off past Wendy because she sticks it in her bra – why? Is this a habit she has, stuffing random objects in her bodice?

Tarkoff has also travelled back in time and murders and a random guy to remind us he’s evil. He starts following Joanna around. When Joanna collects the box, he takes it from her and disappears. She confronts him later and he offers to defeat the king together so they can live happily ever after. This is the man who murdered her daughters. She is unsurprisingly unreceptive to his offer and he uses a poppet to knock her unconscious. She wakes up in the present, held prisoner and drugged by Tarkoff. He kisses her while she’s drugged.

Wendy and Freya finally get the key back but the time door is gone when they finally get to it.  You are kidding me, cliffhaner caused by them losing a damn key?!

To the present and over to detective Rowan who thinks she’s learning more when she hears the person who built Fairhaven (that would be Dash and Killian’s grandfather) was into “weird shit.” She calls someone to tell them about it which makes me think she’s there for more than the murders.

She visits Dash and talks about his house being all witchy and she’s decided to connect the current murders to Dash’s ancestor who died over a century ago because LOGICAL LEAP! This makes her suspicious of Dash… which… what… why? He decides to turn to rather unsubtle seduction instead and they have sex within sight of his evil books.

Which she then steals.

This is the second to last episode of the season. Most of Joanna’s storyline was a recap. We have tension and drama because Wendy can’t invest in a key ring. Ingrid and Dash resurrect a library. Killian groaned a bit. C’MON SHOW! Mooooove! Get with some pacing! Argh the last few episodes have been heavily distracted –or with a lot of meaningful events and reactions taking a lot of time and being redone. It feels like no-one’s moving forwards. Seriously we spent a third of this episode tracking down a lost key! We spent last episode moping around about Edgar Allen Poe! Before that everyone was all terribly sad over death that was then reversed!

And Dash – you live in a house with 8 gazillion rooms but you choose to have sex in your evil ritual room?!

Y’know everyone says over and over what a powerful witch Joanna is – it’d be nice to see it once in a great while. And between Killian and Ingrid we are WAY over the rape/sexual assault quota for this season we do not need another one.