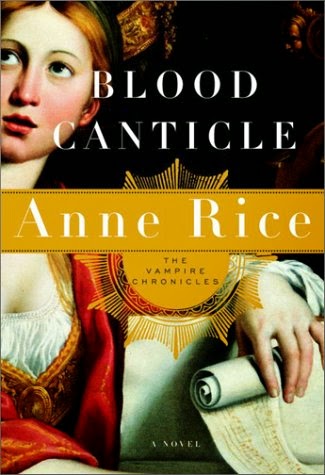 Now Mona is a vampire and not facing her inevitable death, she is able to ask hard questions – like where her daughter is and what has become of the Taltos

The big dark secret of the Mayfair family is finally open and ready to be resolved.

I have a problem.

When I reviewed Blackwood Farm I gave it 0.5 fangs. I do not regret that rating, it most definitely deserved that rating. But now I have a problem, because Blood Canticle is even worse but, out of some odd twisted sense of needing to finish this series, I finished it so I can’t DNF it.

Normally I like to sum up all the positive things with the book first. This will not take long. I like that the book addresses Mona becoming a vampire and how, as a woman, the sheer safety from attack that comes with vampiric power means a lot more than it would to, say, Quinn. It’s a nice mention – it’s one line

There’s the good. I can think if not one more positive thing to add. Now to the much much much longer lists of negative.

Firstly, this book opens with a rather awful screed from Lestat chastising readers for not appreciating the brilliance of Memnoch The Devil (a book that was much criticised and, no, I didn’t like it either). I’ve seen authors respond to negative reviews before and it’s never good, but to actually have your title character scold readers for not UNDERSTANDING the insight of your oh-so-perfect book in a later book in the series is rather shockingly childish and ridiculous. It did not make me positively inclined towards this book

Then we have Lestat running through this strangely bizarre joyous ode to Catholicism, including shovelling over a lot of problematic issues (in a series that likes to make every character bisexual – well so long as their loves are under-aged – praising the church in glowing terms then throwing aside the homophobia as a 3 word bracketed reference is insulting) which then develops into a confused, incoherent ramble of Lestat wanting to be a saint and the Pope and the spiritual joys of an obscure saint that will keep popping up throughout the whole book without any real need or relevance (and it’s not like the books need more reasons to deviate).

After all this (and a brief, strange idea of lecturing the pope that the super-rich and luxurious would totally save the world so why worry about wealth divides), we move towards the story. Well, no, we move towards lots of sitting around and talking, info-dumping, lecturing and great big melodramatic emotional outbursts, commenting on people’s clothes in huge detail, a lot of recapping and a whole lot of nothing happening

But all of this happens with Lestat having “updated” his language. I think this is a response to people complaining about how over-elaborate the language of these books are – especially when Quinn showed up speaking in exactly the same voice as Lestat – so now Lestat drops random “yo” “cool” and “dude”. It is cringingly awful. It’s like your granddad trying to be “hip”.  This continues through the book, it is never not awful.

The characterisation is appalling, especially Mona. Quinn just kind of fades away into the background. Lestat is histrionic and overly dramatic and spends most of the book arguing with Oncle Julien’s ghost, quite why this paedophile is haunting Lestat isn’t really explained, he just appears and he and Lestat melodramatically argue with each other in ridiculously overwrought language for pages on end. Mona is a disaster though – she throws off vast temper tantrums, is slut shamed horrendously both for her sexual past (accepting the blame for “seducing” a male relative when she was 13!) and for how she dresses (which Lestat finds distracting so of course she must change!). She  is portrayed as histrionic and bad tempered and spiteful – even when she’s reasonable (she doesn’t like Rowan for good reasons, but her anger is portrayed as spite. She objects to how Lestat speaks to her but she is considered unreasonable). Lestat constantly thinks of her with words like “harpy”. To top it off, of course she apologises to Lestat for not being sufficiently meek and subservient to him. The characterisation is truly cringeworthy.

The story is crammed at the end. Before that we have an excruciatingly long info-dump of what I assume is the plot of the Mayfair Witches books since these two series have now been mushed together (to no-one’s shock, Lestat is now madly in love with Rowan Mayfair. Because Lestat falls in love with everyone the second he sees them. Always.) in between which we have random dramas and temper tantrums from ghostly Patsy (musical interval! Just like Lord of the Rings and just as boring) and Oncle Julien. Finally after all these tantrums and lectures we learn that the Taltos are out there and need finding.

This is basically the grand conclusion to the Mayfair Witches series which I’m kind of glad I didn’t finished because if I had invested time into that vast trilogy I’d be kind of irritated at how roughly the conclusion was swept under the rug. The vaguely defined Taltos (elves with a breast milk fetish. Yes yes they are) add nothing to the story – they could just as easily be some precious gem (or, knowing Lestat’s obsession, saint’s relic) to be retrieved for all the impact they have in the story. Which means they add nothing to the “plot” which I can sum up as:

We must find the Taltos! They could be hiding anywhere in the world! Yo, Maheret?
Maharet: RAWR vampire powers – here’s the address
Lestat: Cool, thanks dude.

But the Taltos are in peril!
Lestat: Rawr vampire powers – peril is done.

But we need to cover up the Taltos
Rowan: Rawr Wealth Of Small Nation – all covered up.

The vampires in this series – and Lestat in particular – are so ridiculously powerful and just about everyone is so ridiculously rich that there not only is no conflict but there’s no possibility of conflict. Everything is either “rawr vampire” or “rawr money” and SOLVED!

So the crumbs of action add no tension or actual plot. The Taltos themselves are lacking in any real development or storyhooks or conflict or anything else to flesh out this part, Rowan spends half the time staring into space and the rest info-dumping and we have some random POC sitting round the table providing buffoonery or servant duties. Oh and a quick reminder that the Black women at Blackwood Farm are all wealthy enough to leave but they stay because they LIKE being servants even if they don’t need the money; and despite Jasmine’s apparent competence they still need a white male caretaker to manage the place because REASONS.

This is a book where virtually nothing happens yet it still manages to be 400 pages long. The characters don’t even remotely resemble believable people, the dialogue is tortured, the descriptions excessive, the melodrama would make a 1920s director ask for you to tone it down and the whole plot pretty much absent – replaced with histrionics, tantrums, emotional outbursts and lots and lots of info dumping. It was a slog to get through, a difficult, dull, slog and not even close to entertaining