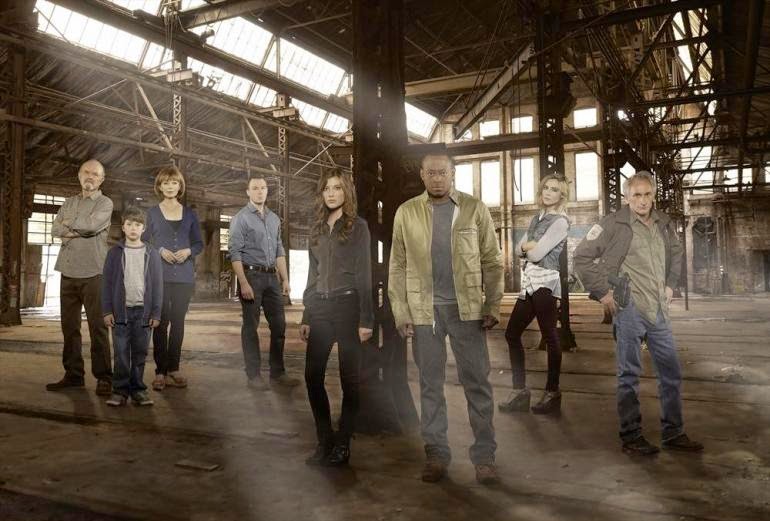 Beginning at the Langston house and Jacob and his grandma – and Jacob realising how much older his parents are and what that might mean. His grandma reassures him that you can’t predict death and, besides, the dead have a habit of coming back round there. She also learns that the family’s factory is closed and has been for a long time.

She talks to Henry about it – he let the factory go after Jacob died, and she learns about her granddaughter, Dr. Maggie.

Agent Bellamy is still adjusting to being one of the Returned – being dead – but he tells Maggie he has been reassigned to the town to be in charge of the Returned, not mentioning that he’s actually been recruited as a spy (I suppose it amounts to the same thing). His new evil boss also calls to remind him of his role and that Sheriff Fred will totally co-operate.

Bellamy goes to see Fred (which is awkward) who reiterates that the government woman (who remains nameless) called him with lots of menace if he doesn’t co-operate. Bellamy gets an office. There’s lots of passive aggressive sniping from Fred before they get notice that there’s someone living in a shack in the woods. Fred and Bellamy head off with more passive aggressive pouting from Fred.

They head to the shack, fearing Caleb has returned (again) – so far they don’t find anyone but they plan to keep watch. Fred checks with Elaine but she is sure that Caleb isn’t coming back; he certainly hasn’t been in touch. There’s a lot of awkward between them since Fred got drunk and came on to her last episode

When Bellamy checks on Jacob he runs into Jacob’s grandmother, Margaret – and she feels like she knows him (Returned recognition thing?). Jacob is creepily collecting dead birds when Bellamy tries to see if Jacob has sensed Caleb around since he has in the past. He hasn’t – nor has he sensed anyone else when Bellamy asks to try and figure out if there’s anyone new around – there aren’t.

To Pastor Tom’s house and Rachel wants to move out – staying with Tom with all of his wife’s things around is just so very very awkward, especially with her moving out and not talking to Tom. He’s all focused on the baby

But when he goes to the church his wife Jeanine drops by asking to collect things from the house – and finds that Tom has resigned while he figures out what he thinks especially since he can’t bring himself to preach the more “traditional” message the church demands. Jeanine suggests setting up his own, small church – since Tom doesn’t like crowds anyway

Jeanine does go to their house to pick up some things and she finds a sonogram of Rachel’s baby (Jeanine and Tom could never have kids). She turns to her friend to dump but her friend is actually not that comforting because it’s not like Tom is actually having an affair or anything. Instead she talks a lot about god’s will which doesn’t sound all that helpful (it’s god’s will for you to be infertile so you can help your husband bring up the child he had with his suicidal ex? This woman has clearly missed her calling as a counsellor.)

That night that “no affair” gets stretched a little when Tom comforts Rachel after a nightmare and she cuddles awwwwfully closely in the name of comfort. Tom extricates himself. Later in the night Jeanine joins Tom in his bed (I’d like to think this is romantic conciliation but my cynical brain things she’s just checking to make sure Rachel isn’t there).

The next morning she’s all bright and welcoming to Rachel

Bellamy continues to stake out the shack and they find the man staying there – it’s not Caleb, it’s a stranger who is very sick.

Margaret goes to see her granddaughter Maggie who confirms that she is completely cancer free. They have a nice reunion which granny rather ruins it by mixing praise of her accomplishment with becoming a doctor with a comment that it all means nothing unless Maggie also has a family.

They do note that the Returned always seem to come back healthy – until Bellamy hurries over with his sick guy – Arthur Holmes, died 1935. Margaret seems to recognise him before being taken away by Henry. She insists on seeing the factory and is enraged to find it in ruins, she accuses Henry of giving up. She considers the factory a vital part of the Langston name and legacy. She realises she went a bit far – she was just trying to cling to something she remembered before she died.

Bellamy questions Arthur – he died in a fire (which is also the nightmare that Rachel had). Bellamy also wants to know if Arthur is having flashbacks to his death – as he is continually about being shot. He’s also not thrilled to be back without his family. Maggie is also confused that Arthur, alone among the Returned, didn’t come back healed of what killed him; she thinks she has to take him to a hospital. Bellamy doesn’t like that because if he’s taken to a hospital Bellamy won’t be able to hide Arthur from his bosses: Maggie wisely points out that he’s just delaying the inevitable.

Margaret visits Arthur, she recognises him as someone who worked at the factory; when Bellamy goes to check on him, Arthur is gone. He sees the CCTV camera and assumes the worst, he calls his mysterious boss and demands an explanation but she is completely clueless and further annoyed because Bellamy hasn’t passed the information on.

He checks with Maggie and they find that the samples of Arthur’s blood have just disappeared, just like Caleb. Like Caleb, he just vanished.

Lucille discovers Jacob’s creepy little dead bird collection. Afterwards Margaret comforts Jacob and tells him that his parents don’t understand what it’s like to be Returned while reassuring him of Lucille’s love while Henry goes and comforts and reassures Lucille. Lucille is worried about weird behaviour because she’s so afraid of people taking him away or saying something is wrong with him.

Bellamy goes to see Jacob and Jacob confirms that his returned senses know that Bellamy is returned – Bellamy asks Jacob to keep it secret.

In the abandoned factory, Margaret digs up a body

I have this building feeling that something is coming on this show, something big and ominous is looming. Between the body Margaret found and the government agency this definitely seems to be the case

And I think the show needs it. In many ways the most powerful elements of the show have been the personal ones – the Langston family in particular – dealing with family members returning, the emotional turmoil of that, the uncertainty of it, the fear to hope. It has been powerful and deep and wonderfully well acted and portrayed. But it has a limited shelf life – and after an entire first season of it, I don’t think it would be enough to maintain a second season, even with the return of Margaret and increasing focus on Tom, Jeanine and Rachel.

I feel that the season is now actually beginning after a little prologue and the meat will now be served up.