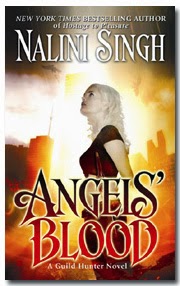 Elena is a hunter for the guild, her job is to capture vampires who have absconded from their angelic masters and creators – and hunt down the odd rogue. Despite working with vampires and even angels, the incredibly powerful Archangels are things she avoids.
So she’s less than thrilled when the enthrallingly beautiful Raphael calls her in for a job. And saying no is not an option. Worse than dealing with one Archangel is dealing with two – because she’s on the hunt for a rogue, a serial killing Archange. She’s a mortal caught between two Archangels – and that rarely ends well for the mortal.
This book is a Paranormal Romance and, in general, it works as one because the romantic elements are somewhat necessary to the plot. The romance is front and central to this story and an integral part of Raphael’s evolution as a character – if not quite so much for Elena. Angels in general and archangels especially are known for being, well, arseholes. They’re arrogant, supremely powerful, long lived and regard humans as easily broken toys or tools to be used, mangled and discard. Their rule is upheld, at least in part, by the utter fear with which people regard them and reinforced by the frequent brutal and horrific punishment they dole out on their minions or anyone who thwarts them (from a world building point of view, I’d like to see this developed more: widespread fear of angels seems to be understandable common, but so is awe and reverence or at least hefty respect which seems… more out of place).
This is Raphael’s character arc. Starting from this place of utter brutality (albeit, still one of the more “compassionate” archangels) and mellowing as he becomes more humane as the book progresses. Similarly, Elena begins from a position of considerable fear towards Raphael (though she’s determined to keep some lines and most definitely won’t grovel or bite her tongue even if she does fear utter destruction) and then becomes more familiar with him as the book progresses.
The problem is the sexual tension between them hits at the very beginning. Ok he’s angelically beautiful (of course) but that doesn’t have to translate over drooling over him while at the same time as constantly thinking he’s about to kill her. Similarly, I’d have much preferred for him to have grown to respect her before he started coming on to her – especially since he’s making sexual “advances” (to say the least – it’s very physical) while still threatening her life and using his angel mojo to mess with her mind. She even says:

“She was worried less about being killed than being seduced out of her fucking mind.”

Which… yeah I don’t think “seduction” is the exact word there. On top of this we have a completely unnecessary element of angels and some vampires being able to exude some sexual scent that Elena is super-duper sensitive to – again leading to all kinds of sexual pressure just from smelling these beings. I don’t really see it as being remotely necessary for the plot either – romance between Raphael and Elena was, certainly, but the timing and the super-sex chemicals not nearly so much. Equally, I can understand Raphael being blasé about the risk and threat he represents, but it’s galling to have Elena feel guilty for trying to defend herself against the all powerful archangel when he, she makes it very clear, intimidates, threatens and tries (and succeeds) to terrify her
It’s a shame, because beyond this the plot elements and character development works really well. The way the angels are presented, in their power, unique abilities and literally awe inspiring scope is really well done. How that reflects on society is really well done and the creation of vampires and the place they occupy in the world is truly unique and not something I’ve seen in any other book. This all ties in really well with both Elena and Raphael’s place in society and really feeds Raphael’s character growth. We see what he could become by looking not just at Uram but also at Lijuan, we see numerous ways for an Archangel to either devolve… or gain great power at the cost of any shred of humanity. It makes the choice of relationship a truly interesting conflict – does she strengthen him? Or weaken him? It adds layers to their dynamic and consequences to their relationship that make it far deeper than “these two characters want to knock boots while a serial killer roams around the city.”
On that note, Elena and Raphael, even when they get all hot and heavy for each other, remain focused on task throughout the book which is also something I appreciate. There is a monster out there and neither of them, for a second, forget that or act like it’s not important or anything other than their ultimate priority. The threat Uram represents is always there even when exploring their characters, the world or anything else in the book. It makes the writing excellent, well paced, and the tension always there.
Elena has a lot of good points in a character – her refusal to be cowed, a defiance that doesn’t come across as ridiculous or foolish. I want to see more of her to get a good grasp of her character – and a grasp of her close friends (like Sara) to see more. She has an unfortunate backstory which feels a little tacked on – because it’s such a necessary element of Urban Fantasy protagonists. It felt less like an integral part of her character and a more a “she has to have one of these.” I want to see a lot more of her before getting a better feel of her.
There are a lot of POC in this book – Elena has a Moroccan mother, her best friends and fellow hunters are POC, several Archangels are POC representing their coverage over most of the planet. Most of the background and side characters have numerous POC represented – POC are integrated throughout the story, not just as odd token minorities but as integral characters and creating a world where diversity is the norm.
There are multiple female characters – sadly several of them are victims because Uram targets women (and I don’t come close to understanding why that is a necessity). Her best friend and the Hunter Guild director, Sara is a woman and awesome, the most powerful of the Archangels is also female – the Archangels themselves seem to be pretty gender split; the other female character we see in most detail, Michaela, isn’t exactly a shining example of strength, good decision making or shining personality – but she is one of many female characters. And while she is slut shamed, there is a definite attempt to curb slut shaming elsewhere, including from Elena (and it’s nice to see even a protagonist get things off and be corrected).
There’s also a disabled character who handles a lot of the hunter’s most secure locations and is definitely presented as capable and an asset – he doesn’t play a huge role but he’s there, has a personality and is in an important enough role I’d hope to see more of him. Sadly, despite a large cast, I remember no LGBT characters.
In all, I really liked this book. It had some problems, some elements that are not appealing, but it has a lot more that really work, a plot that draws me in and some characters that really feel real and fleshed out which I appreciate a lot. Not only is this a great book in its own right, but it’s a promising introduction to a series that I suspect will quickly find its way onto my must read list.