Constantine, Season 1, Episode 2: The Darkness Beneath 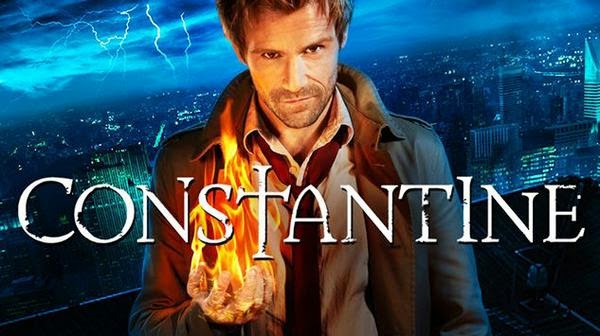 We open to a mine in Pennsylvania and a miner returning home and being a drunken, abusive arsehole to his wife. Something shadowy and probably evil flashes behind his back when he gets in the shower –and the water goes black far more than mere mine dirt could account for. It then fills the shower cubicle with flames. Now that’s a bad plumbing problem. The camera focuses on a sooty handprint so it must be relevant

To John Constantine and Chas – with Chas following John’s magic to make money gambling. John has heard about the burning in Pennsylvania and, more importantly, the map that Liv left last week has a wet blood spot over the town. Alas, Chas can’t go because of a little train derailment.

We cut to a woman drawing lots of pictures of John and angrily asking “who are you”. Her room has pictures not just of him, but several demonic pictures as well. She leave and runs into John who is watching the funeral. She’s stunned to see him (much to his bemusement) and says she’s dreamt about him and he sees she has a picture of him. He assumes she’s conning him (or pretends to) and tries to leave but she begs him to explain – he distracts her and disappears. But he’s not as quick as he thinks he is, she has stolen his wallet and pulls out his driving license.

John goes to the pub and makes a remark on the town symbol being a dragon (that’s the Welsh flag. So, a town with Welsh heritage?). He very unsubtly questions the people in the pub about the death where he learns that the latest victim is just one of 9 deaths – albeit not all of them from fiery showers. The miner reports them hearing knocking down in the mine – which means something to John

He sneaks down to the mine, followed by something burrowing under the gravel. In the dark tunnels he knocks on the wall – and something knocks back, followed by lots of rumbling – he runs quickly

Wake time, everyone bringing food (John brought a ready meal) and naturally sneaks into the family only section of the bun-fight (can’t say I’ve ever seen one of those signs at a wake before), there he finds the sooty handprint and the much sootier shower. He takes a sample of the black goop in the shower head. He has a brief interview with the widow who dodges the question of hearing anything knocking in the mines but does offer a story of a Romani girl marrying a “captain of industry”, that industry being coal. John ignores this surprisingly odd hint and tries to leave, especially when the widow starts playing with his tie and suggesting she’s free to… talk.

She chases him out and has the crowd catch him for being a reporter, but the big guy in charge seems more suspicious, though possibly for the Environmental Protection Agency. After a brief fight, John confronts him about an “unnatural disaster” in the mine (though is confused as to why it got out) and the boss is worried about scaring his miners; he refuses to answer when John talks about the knocking.

John returns to his hotel and runs into the artist, Zed (they both stole each other’s information). She has visions and dreams and wants answers – John not so much. As she tries to get her to leave she grabs him and reads his emotions – which are all sad and guilty. This prompts John to help her find some answers (and him) using her psychic powers to check out the black sludge he collected. Which ends up with her having horrific visions of burning but also lets her see a tall cross. He suggests they’ll work together solving the mystery – but instead leaves without her.

John goes to an abandoned chapel (complete with tall cross) in town which has a sooty demon drawing on the wall. He doesn’t find a demon – he does find two teenagers making use of the empty building – one of which tells him about the local urban legend of the “tall man” without a face. With them gone he performs a ritual to see the shadowy monster

Zed goes to the bar and talks to the ex-pastor who lost his son and talks vaguely about faith and the cursed mine before she goes home to find John in her flat waiting for her (sleeping on her sofa). She starts to kick him out but he insists he was just checking out her abilities before telling her more – and admits his profession. John has a big big dramatic speech about the terrible things he faces. She’s not scared off and the showndown is interrupted by a siren – there’s been a mine collapse.

He goes to the mine and confirms the miners heard knocking before the collapse. John decides to confront some guy (boss man’s son) in his car about digging into the earth “where no mortal man has a place”. He tells him to shut down the mine – as the car locks itself and begins to fill with water. Water which has clawed hands in it to drag them under. Zed saves them by arriving in time and prying open the door. John lives, the other guy doesn’t.

Walking back, John expositions to Zed – coblynau, which warn miners of danger. Only they don’t normally kill and never come above ground. Something is messing with them, drawing them out.

They go to the bar where there’s a big meeting of the miners and they put some clues together about Ellis, the ex-pastor. John talks her through another vision and reveals the location of Ellis at a camp – so it’s field trip time. John tries some exorcism on the pastor which doesn’t work because he’s not the bad guy. He points out what John and Zed missed; the people dying above ground aren’t miners, they’re bosses.

Last boss is someone called Tad and he and his son are opening up the mine and checking to see if it has been cleared before the miners return. John and Zed arrive in time to see a coblynau leap out of the gravel covered ground, knock the boy aside and grab Tad by the throat.

Zed paints a symbol that John directs on the wall while he respectfully honours the coblynau, reminding the coblynau of what it is; a guardian, helper, protector. Tad is dead though. John again says they have to close the mine and ensure no-one else goes down.

Which leads to him, Zed and Ellis outside the mine, setting off explosives inside to close it down. The coblynau are now at rest if left alone – but doesn’t mean that whoever summoned them and made them kill isn’t still out there.

He goes, alone, to see the widow – who calls the coblynau when he claims to know who killed her husband. Yes, John has finally put together her random Romani comment from earlier. She tells her minions to kill him – but John has an ace: coblynau are spirits of dead miners, she used them to kill a miner; he calls her dead husband as a coblynau to get his revenge. (Her coblynau just kind of hold him) she is dragged underground and the coblynau leave

Back to John and Zed snarking, John trying to convince Zed to leave him to do his work alone. She’s not buying that, I suspect this argument will be revisited.

It was doing so well – and then Romani curses? “Nothing blacker than gypsy magic”? Really? Romani are constantly depicted as being either thieves or mystical – and to compound that by taking the eternal “mystical romani” trope and then making their magic extra, specially black is further demonising a people who are constantly demonised. Was there any need at all? Couldn’t she have been any kind of black magic practitioner and had the coal mark be sufficient evidence to point to her?

I'm also all kinds of leery about the ending. The villain looked very much like she was in an abusive marriage - and to have her end up being dragged into whatever fate by her abuser? No... no no no

The show is definitely doing the best it can to wiggle around the restriction on showing Constantine smoking. We have smoke coming from his mouth when his hands aren’t shown, him putting something we don’t see out in an ashtray and even Chas’s comment on Constantine being an expert at reading the future through smoke. Nicely implied but not quite breaking the network restriction (I know this will please a lot of people who were so upset about Constantine not smoking… who also seemed pretty blasé at the bisexual character being straightened. Priorities.)

And I’m impressed at a pretty obscure myth being used – it’s nice to see some research. I generally like John in most ways (he’s one of the few characters who can pull off that jaded, run down bad boy) and I think Zed will be a much more interesting character than Liv.

So, a lot of good. But… I’m not a big fan of how the “investigation” goes. John is clumsy, he kind of shows up and spouts woo-woo at people which, thankfully in this case, was swallowed but in general it’s just clumsy. And, really, a lot of people were quite happy to accept John’s woo-woo in rather bemusing circumstances (Ellis repeatedly says how much he has lost faith, but it quite willing to accept John just tried to exorcise him)

The pacing also felt incredibly slow – John didn’t seem to be getting anywhere or actually doing anything.

Generally I hate the whole “I work alone to keep you safe” schtick, especially from a man to a woman because it has so much paternalism to it. In this case it hasn’t bothered me too much because it seems less like John ensuring Zed is kept safe and more of him ensuring she knows exactly what she’s getting into – and keeping himself safe should she not be who she claims to be.