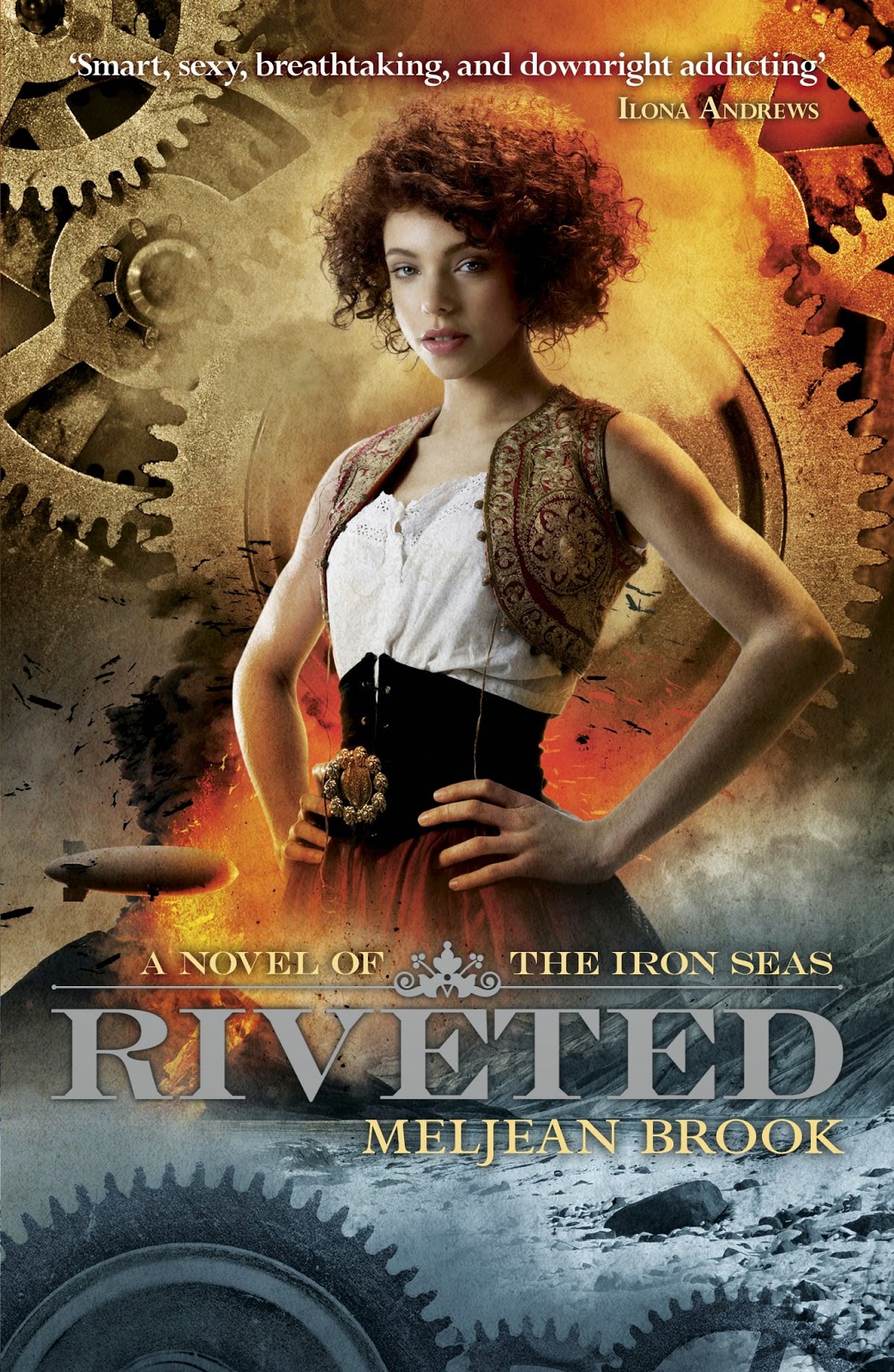 Annika is looking for her sister, after her own mistake caused her to be wrongly banished from her home. She left her insular, hidden community of Hannasvik to search the entire world for her, if she has to, carefully keeping knowledge of her origin secret. She knows that Hannasvik would not do well if exposed to the prejudices of the outside world.

David is part of a science and exploration expedition to Iceland when he runs into Annika – and hears the accents of his dead mother. After so many years, he now has the chance to fulfil his mother’s dying wish – but Annika is very closed mouthed about her origin, and suspicious of his questions.

But even as they struggle over Annika’s secrets, a greater threat arises – there are powerful men with dangerous plans on the island and more than Hannasvik may be at risk.

The romance in this book is generally one I enjoy and reflects many of the positive points I’ve found in several books in the series. Annika is attracted to David, she likes him, she’s intrigued by him – but is stopped from getting close because of dual concerns – the need to maintain secrecy about her origins and she has an ongoing task to find her sister. This is exacerbated by David actually having an ulterior motive to get to know Annika which she can certainly sense and is duly wary about. She has priorities which, to her, take precedence over romance even if she does care for David, find him attractive or even like him. This is something I really appreciate in a romance – the characters maintaining other priorities than romance and those priorities not being utterly destroyed because there’s a chance of some really hot nookie. I find a lot of romance characters can come across as either deeply self-absorbed or grossly lacking in priorities simply because the romance consumes everything else in their lives, regardless of responsibilities

This also creates a reasonable conflict. I’ve complained a lot about romances that have convoluted conflicts based on dubious misunderstandings, assumptions or rather dubious mis-overheard conversations (or believe that one or other party is dangerous/cursed/hunted by angry vampire bonobos. There’s also of dubious conflict in romance) – but this book works because the conflict is reasonable and makes sense. Annika does have other priorities, she does have people to protect, equally David has commitments and a life to lead. All of this doesn’t disappear because romance is in the offing.

There’s also the story which is pretty excellent. The conniving of the bad guys, the risk to Anna’s home, how David is drawn in all work to create a twisty, interesting, well paced and very fun plot.  The story has a lot of character agency, a lot of the characters being awesome without being ridiculously powerful and it holds together with excellent consistence, not needing leaps of logic or random chance or sheer bizarre luck to hold any element together. It works, it draws me in and is one of those that makes me want to keep reading no matter what’s happening around me.

In turn the romance works so well with the story – it’s tangential to it, it doesn’t draw from it, it doesn’t try to overwhelm the story. David and Annika form a romantic connection while still firmly focused on the actual plot and what is vital at that moment.

It’s also a plot that continues to link to the rest of the Iron Seas series which I like – even though we have a completely different cast of characters to the other books I’ve read in the series, the world is always very present in all the books, the story is directly impacted by this extremely unique and fascinating world to make the whole series feel much more like a whole even without direct connections. This is not a plot that could exist in any other setting because the world Meljean Brook has created permeates the whole series.

The diversity of this book is excellent. The protagonist, Annika is a Black woman and her love interest/co-protagonist David is Native American and disabled. Annika is also brought up in a completely different culture from those around her so frequently challenges so many of the assumptions and conventions of “manners” people have. Some of these are basic cultural examination – like the idea that someone’s place of origin is so essential to know, or that she finds delving into someone’s past when they are clearly unwilling to divulge invasive and unacceptable. While at the same time she is open and honest about attraction and relationships that others find taboo which is a nice twist. But she also relates this to her race and sexuality – everyone sees a Black woman and assumes she’s from a certain place (the Liberé territory in this world) even though she points out that their own cities have considerable Black populations – she challenges and mocks the ridiculous assumption, no-one should reasonably have. She also repeatedly, due to her originals, challenges and questions the misogyny of the world, causing David to re-examine several things he generally assumes as basic reality.

The book has an excellent depiction of a generally bigoted society and it remains a constant theme of the story and one of the fundamentals behind the whole plot. Annika’s secretive village hid for many reasons – but was originally founded by women escaping misogynist exploitation. They escaped various degrees of bondage and oppression by men, and outright slavery by several of the powerful forces of the world to form Hannasvik, their own sheltered community they keep secret from the rest of the world. The town is entirely made up of women and is fully accepting of same-sex relationships; and in a deeply patriarchal and homophobic world that secrecy becomes paramount. The depiction of this is really well done, it doesn’t depict separation as some kind of solution for these women, like the ideal future would be marginalised people to have their own insular colonies – but as a cause of a world that so rejects them. They don’t reject the world – but they have a legitimate fear of the rest of the world discovering their society; it’s very clear and well presented and developed.

David also brings some interesting perspectives on disability – even though he now uses the steam-punk nano-agents to give him full mobility (even super-mobility) – he is still very marked as over to people around him. Many people shun him, many people make assumptions about him and many people are repelled by him (in part because, in this world, he also represents the Horde’s nano-agents and their ability to control people). But there’s also a deeper look at the “kindness” of people towards him. Many people assume he cannot do certain things, or offer help completely unasked for in condescending, somewhat pitying fashion rather than wait for him to decide what help he needs or doesn’t (if any). Even in his past he thinks of times, before his prosthetics, when people assumed he simply could not be happy; the idea that a disabled man could not find enjoyment or fulfilment in life and he must be “putting on a brave face” – it’s an excellent challenge.

One thing that didn’t mesh was the idea that the church was calling for leniency towards gay people, because at the same time several of the people attacking people being gay quoted religion to do it (as well as depicting it a problem of the Horde towers). This is an alternate world, so yes it’s definitely possible an alternate world could have Christianity as a force against anti-gay bigotry rather than a force pushing it – but I’m going to need to see some world building to carry that through, especially since scripture is still a source of bigotry out there.

I do love this book and this series’ continued addressing of class. Poverty is a problem in many of the New World cities, with one of them even presenting helping the poor as “sedition” as it “encourages them”. But we’ve got a lot of rounded look at other elements beyond merely “the poor exist and are oppressed” such as the acknowledgement of the pull and influence one of the party has because of his noble family or the challenge of the idea that the oppressed Castilian peasants just need to be taught how to stand up to themselves.


While I’ve read this series out of order to a degree, familiarity with the world means you don’t particularly have to read them in a set order. Every time I pick up one of these books now, I fall in love with this world a little more. This is a series that just seems to get better and better and has rapidly made its way onto my “must read” list. This book just moves it closer to the top of that list.