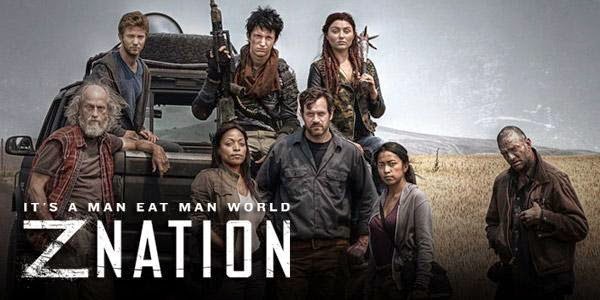 Citizen Z sends out a broadcast regarding a herd and then heads off to check the equipment, before horsing around the desolate station.  He is clearly bored right out of his tree.  Suddenly, someone tries to hack into Citizen's computers and as he tries to follow the signal back, his eyes get blurry. An alarm goes off, but Citizen simply takes a broom and knocks it off the wall.  Suddenly, something flies at the station and Citizen Z assumes it is from outer space.

The team team is desperate for water and all seem down except for Murphy, who claims to conserve his bodily fluids.  They hear a grumbling and  when they look up, a herd of zombies is heading out of a giant dustball straight in their direction.  It's Murphy who has to push the crew to get moving because they are all so dehydrated.   They manage to make it inside an old mortuary, just as the zombies descend on the town.

Citizen Z makes his way  to the base opening and finds bloody footprints on the concrete floor. Citizen Z pulls out his gun and is confronted of all things by a cosmonaut. Citizen Z orders the cosmonaut to put his hands in the air and  cosmonaut complies, adding that he is a friend.  Citizen Z then instructs him to take his helmet off because the air is safe.  At first the cosmonaut does not agree but he eventually complies with a smile and a laugh.

The herd continues to move through the town as the team hides out.  Murphy is not impressed by their listless reaction.  Otis reveals that the zombies are migrating because they don't like the cold. Apparently ,the Z's are coming from a refugee camp in Alberta, picking up new zombies along the way, making the herd miles wide.  Otis pulls out his flask and shares it with the group, and of course Doc has to take a huge swig to figure out the ingredients of the homemade hooch.  The zombies continue to add pressure to the doors, causing the group to realise that they are not secure.   They just manage to  get into another room before the herd bursts through the door.


Citizen Z sits and drinks tea with the cosmonaut and finally asks him how he got there.  Yuri explains that he was on the international space station when Houston and Moscow went dark three years ago. The food ran out and the station stopped working - heat and air, so Yuri used the escape pod.  Citizen Z asks about the rest of the group but Yuri claims that there was no crew.  Citizen Z pulls out the vodka and they toast to excitement.  The fact that the dog is not reacting to Yuri leads me to believe that he is a phantom of Citizen Z's imagination.

Now trapped in a room, Murphy tells the group that they cannot stay there and wait to die.  They begin to hear sounds in the walls and realise of course that since they are in the morgue, zombies are in the individual freezers which line the wall.  After killing one of the zombies, Warren realises that the might survive this herd  if they get into the freezers made for the dead.

Citizen Z is busy explaining how the system all works.  Yuri calls it a terrible burden to see so much pain and adds that one man shouldn't carry this alone.  Citizen Z explains that they have food for decades and that everything is solar powered.  Yuri finally notices the dog and questions why it is not active.  Citizen Z says that they can find out the reason for the apocalypse together and that they have to be careful because someone tried to hack into this system.  Citizen Z is adamant that no one can be trusted.

One by one the team members get into their individual freezers, until only Warren and Murphy are left.  The final freezer is full of a zombie however.

Citizen Z continues to show Yuri the station;  they play various games and get drunk together.  After putting, Citizen Z looks up to find himself alone.  Yuri is staring intently at the systems which maintain the station. When Citizen Z finds him, Yuri says that they had the same thing on the station. Citizen Z tries to encourage Yuri to finish the game and Yuri replies, "you're an odd duck Simon."


With no choice left, Warren crawls inside the body bag.  Murphy leaves the zipper down enough for Murphy to breathe and the zombies burst into the room.  Even though Warren had begged him not to abandon them, Murphy quickly leaves the room.

Later, Yuri is playing video games and he starts to question how to kill zombies. Things are clearly getting awkward between Yuri and Citizen Z.  Citizen Z excuses himself to go the bathroom and while in the stall, he uses his Ipad to learn about the space station.  Yuri bangs on the door asking what is taking so long and so Citizen Z pretend to be using the bathroom.  The moment Yuri steps outside, Citizen Z loads his gun.  When Citizen Z returns to the computer area, he finds Yuri gone, so he begins to search the station.  Citizen Z finds Yuri back in his cosmonaut gear in front of one of the panels.  Citizen Z orders Yuri away from the panels, saying that he won't allow Yuri to do to him, what he did to his companions on the station.  Citizen questions how Yuri knows that his name is Simon and Yuri calls them friends.  Citizen Z is infuriated and demands to know who the hell Yuri really is.  Yuri replies that Citizen Z asks the wrong question.  Citizen Z continues to try to question Yuri, until Yuri attacks.  The two men struggle for the gun but Citizen Z ends up with the upper hand, threatening to blow Yuri's brains out.

Murphy makes his way outside and is in the throng of the zombies.  A few pause to stare at him and Murphy asks what they want, if they don't want to eat him.  Murphy spies someone using the mirror and the sun to send a message.

Murphy has to dodge a particularly interested zombie to enter the building where  the signal originated.   In a room Murphy finds a mother and a daughter.

The team is still hiding out from the zombies  in their individual areas,  lost to their own thoughts.  Otis starts to panic, telling the zombies to get out of there.  Doc tries to get Otis to calm down but Otis kicks open the door and is promptly eaten by zombies.

Murphy enters the room and the woman and her daughter beg for help.  Instead of helping, Murphy begins taking their supplies, as the woman begs him to leave some water for her child.  The woman calls out to Murphy that if he sees a man in a red jacket, to tell him that they are still alive.  Outside, Murphy sees the man in question and it turns out to the zombie who he had to dodge to get into the building.  Murphy gets the attention of the zombie and then opens the door for it to enter the building.

Yuri continues to choke Citizen Z, asking what is wrong with the dog.  Citizen says that he cannot breathe and Yuri asks why.  Citizen Z replies, "Yuri is strangling me", and finally Yuri tells Citizen Z to be more specific.  Finally, Yuri yells out oxygen and realises that the alarm he has so callously ignored earlier was a warning about Oxygen levels.  Yuri disappears and Citizen makes his way to the panels and turns the air back on.

The streets are now pretty deserted, with the odd zombie making his way around, as Murphy walks with his stolen supplies.  In the morgue room, Warren is still encased in a body bag, when a zombie finally sees her but before the zombie can attack, Murphy appears and yells hey.  The zombie then leaves the room and Murphy lets Warren out of the bag.  Murphy gives Warren the water, saying that he took it from a dead family.  Warren takes a big drink.

Yuri is back to playing video games but he is clearly lonely.  When next we see Murphy, he is standing at the opening with dog.

The group sits to eat, ecstatic about Murphy's ill gotten gains.  They all congratulate Murphy and question how many zombies Murphy killed.  Murphy basks in the attention, enjoying his roll as hero. The group toasts Murphy, saying that he may be the misfit, but today, he became their friend.  Suddenly, Murphy tells the group he needs to go, when he sees his reflection.  It seems that Murphy's irises have gone a strange colour.

I really didn't know how to take Z Nation when it first started.  It constantly has a strain of ridiculous camp moving through it, all while paying homage to other stories in the genre.  For instance, in this episode, the zombies not liking the cold and migrating, as well as the camp up in an Alberta, are taken directly from World War Z.  Little inclusions like this make the geek girl in me smile.  In recent episodes; however, Z Nation has been adding a seriousness, dare I say starkness to it's storyline, with the death of Garnett and the mourning of Warren. I now truly believe that anyone can die and when they do, we are supposed to have a feeling a loss.

Murphy is continuing to evolve as a zombie and thus far, he has kept these changes to himself.  On some level he clearly feels sympathy for the zombies that the group kills and he refuses to take part in dispatching any zombie.  Could it be that he fears he will eventually become one?  None of this has changed the coldness of his character though.  Not only did he steal the last bit of food and water from a woman and her daughter, he set them up to be killed by their own loved one.  That takes a special kind of coldness.  He has however started to develop some feelings for the group.  Bringing them food and water may all have been about the practicality of ensuring he arrives in California; however, he clearly enjoyed the praise he received.

This week we had some more development of Citizen Z. We still don't know very much about him but we do have a real sense of how lonely and isolated he feels.  Yuri, Citizen Z's hallucination, clearly saved his life but at the end of the day, when Yuri was gone, it was absolutely clear that Citizen Z missed him.  Citizen Z may not have the daily threat of zombies, or have to worry about food and water but make no doubt about it, Citizen Z is suffering.  Humans are social animals and we are not meant to live in isolation.