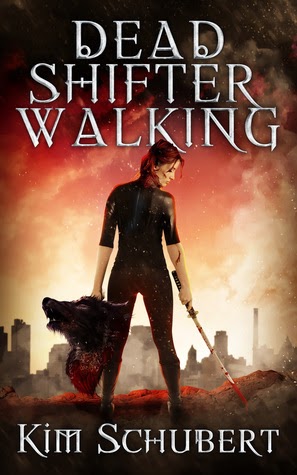 Olivia is a succubus and the enforcer for the local supernatural council. She is the one who keeps people in line and chops off heads that step a little too far out of line. It’s a demanding job.

A job that wasn’t made any easier by the vampires, watching far too much modern media, decided it would be a great idea to reveal themselves to the world. Now humanity wants to get involved in supernatural business: Olivia is not welcoming of the idea.

But when an ever growing number of humans are being killed by an apparent supernatural being, Olivia has to act quickly - and with mortal authorities – to stop the killing and put an end to the backlash. If it were all Olivia had to worry about it would be enough – but werewolf and vampire politics are both pulling at her attention as well: one of them coming very close to her own family.

This world setting is extremely rich and diverse and immensely deep. There are a huge amount of different supernatural beings in this book as well as some pretty involves structures around them. So we have vampires, werecreatures, witches and succubae; which lots of magic and the undead all really filling up this world. On top of that all of these creatures don’t just exist in our world, there are political structures and positions and hierarchies and how all of that relates to human politics in this newly revealed supernatural world.

Each of these supernatural creatures also has their own political structure, their own ways of running their societies and even their own cultures which themselves are interesting to delve into – like the way the werecreature pack works. Or the vampires and their very major elements of consent and fidelity in their culture; I especially liked the consent issues that are really powerfully included in their interactions, their sex lives and their feeding. (I think this was especially vital since we have so many books in the genre where vampires are very dubious when it comes to consent).

There’s also the individual creatures, magic and a whole lot more – because this book doesn’t rely entirely on “here’s a vampire, you know what vampires are” and dispense with further description; in addition to their involved culture we have to also consider exactly what they are – this is especially true with Succubae and their emotional manipulation abilities which is not quite feeding and is very involved and layered while being at the heart of who Olivia is, how she interacts with the police, the supernatural community, her role as Executioner and the friends and co-workers she lives with.

Speaking of, there are a lot of characters in this book all of whom seem to fill pretty important roles in the world. Several vampires, several wereanimals, her fellow succubae who live with her in the dance club, Grams who is an associate of hers, a chauffeur/witch, a police contact and a few others. All of them actually feel developed and all of them do have a sense of their own stories or a hint of them at least – even if we don’t see it they feel like more than names.

But there’s too much. Or, rather, there’s too much that has been hinted at without a lot of development that left me a little lost. Like the two major vampires Olivia deals with – Blake and Tate; I got the two confused a few times (which didn’t help that one of them is Olivia’s love interest), it took me a while to sort out where they each fit in the hierarchy and I’m still not entirely sure why they decided to follow her around for as long as she did, especially since she’s involved in a murder investigation. I know she’s not the human authorities and outright denies human law – but surely dragging random sex partners with you to crime investigations is an objectively bad idea? Speaking of human law enforcement there was Mercer who liked her then hated her then disappeared for several chapters and seemed to be quite neutral towards her – the book was so full that when he returned I had a “wait… and who are you?” moment. Then there’s Grams who is connected to Olivia but I’m not sure how – it’s somehow related to her dark and tragic past that is alluded to and regularly causes Olivia to have little rage/grief meltdowns but I don’t know much else. It’s also related to the kids she seems to live with who may or may not be Succubae/Incubi. The wereanimals were also guys whose names I often forgot (and mixed up) and it was only towards the end of the book when I realised they were werelions and not werewolves.

I’m still not entirely sure what it means to be a succubus. I’m not sure how their council works how much scope and authority it has, whether she’s one of many executioners or not, and whether she’s defacto leader of the council or she’s just so scary no-one will disobey her which is weird because she doesn’t actually act that scary. She walks around like a colossal badass who every vampire should wet themselves when she comes near them, but when it comes to actual combat? Not so much.

I have to return again and say that I do like these characters, I love this world and I love the potential that has been put in there. I actually suspect the author has really really detailed notes on all these characters and the world that is so deep and rich – but unfortunately that has led to not realising how little of that information actually makes it to the page. There are gaps. I can follow the story, but there are places where I was sure I’d missed something and just really needed some gaps finished.

The story itself, therefore, is a little confused. There’s so much happening, so many characters and such a wide world that it takes a lot of concentration to keep up with it. But the tension of the story is well maintained and we have a lot at stake ensuring there’s a fairly constant sense of what is at stake… but while that is maintained the pacing isn’t always great, I do feel there are times when Olivia seems to entirely forget the serial killer case. I think, in part, it’s because there’s a lot of other things going on in Olivia’s life (like Kass’s issues) but it still can be jarring. Particularly when she takes time out to flirt with a vampire or go dance. The writing itself is pretty tight and the story does bring everything together and lay out both the world and characters that I really want to know more about – the story itself showcases all this but does lose itself more than once

Olivia is an interesting character. She has a lot of positive points – she’s definitely confident, she’s authoritative, she’s powerful and she’s determined. She has skills that people respects. But she also has rage issues that border Keillie independence and, as I’ve mentioned, her lethal demeanour is not always backed up by her skill set. She’s also got an ill-defined tragic background that causes a lot of self-flagellation but I know so little about it I can’t really analyse it. So she’s a mixed character with a lot of potential.

There is a problem with  Jerry the chauffeur. He stands in for a lot of the inclusion since he is the most prominent POC and gay man. We belatedly learn that he’s a very powerful witch but for most of the book he is, bemusingly, Olivia’s driver. Despite only meeting him in this book, Jerry rapidly becomes her bestest friend – not just driver but also helping buy her wardrobe (yes, she gains a gay personal shopper) and generally being massively loyal to an almost fawning degree after a ridiculously short time. They go from strangers to him being a complete sidekick and classic gay/black friend in virtually no time; it’s just so ridiculous how completely invested in her in so little time. In theory he has a relationship with another character but it’s kind of background and implied – in fact, even the sexuality of that character is, as I mention below, somewhat vaguely undefined.

There are other POC – her best friends and a major character in one of the side plots is Kass, a Black woman, fellow succubus; interestingly her plot line requires Olivia’s help without her being actively victimised. She’s valued and helped – she doesn’t serve and she isn’t useless. There are other POC among her young housemates whose position and connection I’m still unsure about. A number of background characters – love interests of other characters, surviving family of the serial killer victims, and general people around her are POC.

Kass and Grams also show that Olivia does have strong female friends. There are other women she doesn’t like but they are definitely counter-acted by the very positive, strong comparisons. Even Mallory, a female vampire who is at odds with Olivia in this book is also strong and heavily respected by Olivia.

Mark, a random wereanimal is gay – well, Olivia is sure he’s gay. She doesn’t even think he KNOWS he’s gay, but she knows his sexuality before he does (gah, y’know I can live with a character taking time to realise their sexuality, but having someone who is not even that close to them know their sexuality first is annoying). I think he manages to come to her realisation in the book because he kind of ends up in a relationship with Jerry (well he talks to him and Olivia assumes that means they’re in a relationship.) There’s also a “flamboyantly gay hairdresser”. Yes.